Engaged social followers are translating into voters, as Cision accurately predicted that both Trump and Bernie Sanders would win the New Hampshire primary and lose the Iowa caucus.

Senator Ted Cruz’s strength has diminished since winning the Iowa Caucus on February 1. His one and only victory can be seen as marginal at best, only retaining 28 percent of the vote to Donald Trump’s 24 percent. Marco Rubio finished third at 23 percent.

Tonight is the Nevada Caucus for the Republican Party, and Trump has the momentum as he is coming off of two clear victories. 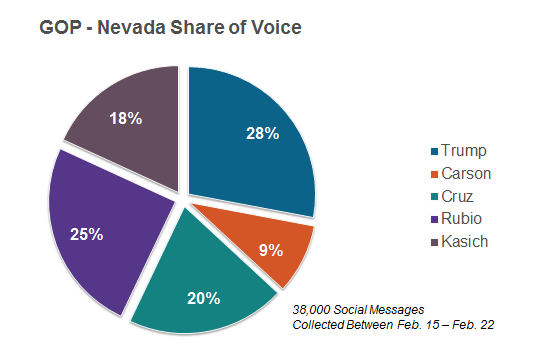 On Monday, Cruz fired his communications director Ricky Tyler, for publishing a misleading video which insinuated that Rubio said that the Bible had no answers. This fits the narrative being built by Trump that the Cruz campaign is conducting a dirty tricks campaign.

Should Cruz lose Nevada he’ll need to either make changes to his team or drastic shifts in his messaging to find new voters and engage on an equal plane with Trump and Rubio.

If this shift happens, it will likely be a credit to Cruz’s top staffers on Twitter. They have more followers than Rubio’s staffers but are far behind Trump’s staffers. If Cruz wants to come close, these are the people that will help him thump Trump:

The top staffers and number of followers were pulled on February, 22 2016.