As the Sweet 16 tips off, here’s a look at the top moments of rounds 1 and 2. Cision analyzed the NCAA tournament with its social software, collecting and providing insights from those enthralled with March Madness. Let’s take a look!

So where do the Sweet 16 teams stand before the games start up again tonight in terms of social conversation?

Virginia, North Carolina and Kansas are the leading basketball teams in terms of share of voice across social. Add Oklahoma and Duke to round out the top five conversation starters in the Sweet 16. 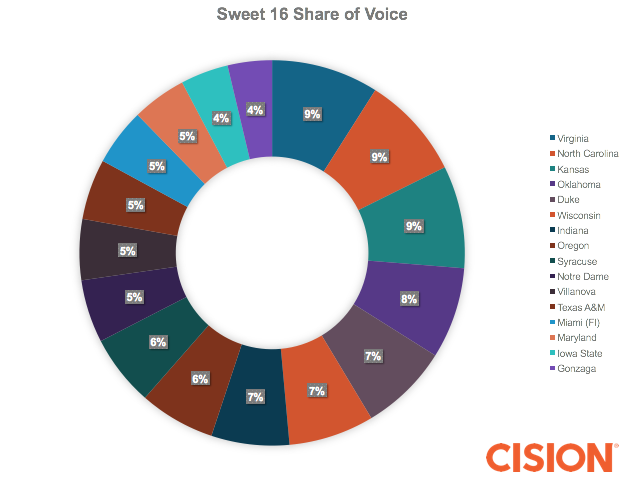 The event that has sparked the most conversation during March Madness was when Middle Tennessee beat Michigan State, causing “one of the biggest upsets in March Madness history.” It is only the eighth time a 15 seed has beaten a 2 seed in the tournament.

Middle Tennessee State’s upset of Michigan State was the 3rd biggest upset since 1985, according to @NateSilver538pic.twitter.com/H5ZsCBWUFM

The second most buzzworthy moment of the tournament so far came when Northern Iowa coughed up a 12-point lead to Texas A&M in the last 44 seconds. LeBron James’ comments about how the loss was an embarrassment further exacerbated the conversation on social.

The third and final top moment of the first and second round of March Madness came when Little Rock, a 12 seed, knocked off Purdue, a 5 seed, in the first round. Purdue was the favorite to advance in the bracket heading into the game.

Of all 68 NCAA Tournament contenders, Virginia dominates conversation volume across social media. Four of the five most talked about teams made it into the Sweet 16, which stands to reason as they played the most games and had fans celebrating their wins. The lone outlier, Michigan State, generated conversation for all the wrong reasons with its historic loss. 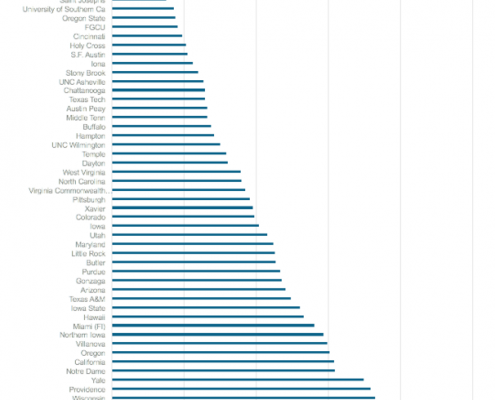 Just because a team dominated social conversation doesn’t mean the players on its roster did, too. Only three of the most tweeted about players made it to the Sweet 16. Cinderella story Angel Rodriguez from Miami inspired the largest share of conversation, centering around the fact that he was the “smallest man on the court … who not only scored a career-high 28 points, but ignited his team with alley-oop passes and circus shots when things had begun to unravel.”

You didn’t need a heartwarming backstory or even the best stat lines to join the conversation, though. Bronson Koenig averaged a respectable but not otherworldly 13.3 points per game but became the second most talked about player because he hit two three pointers in the closing seconds, the last a buzzer beater, that sent his Wisconsin Badgers to the Sweet 16.

Taurean Prince of Baylor earned buzz because of a sarcastic post-game interview. 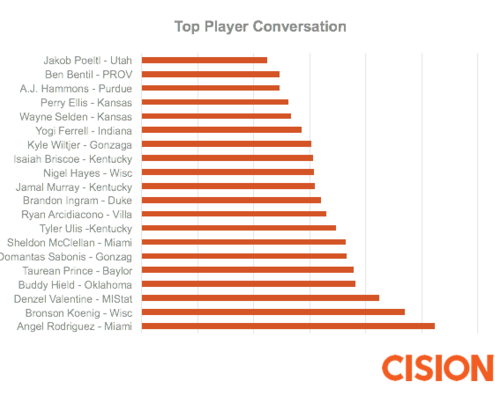 Conversation volume of coaches correlated to victories, as four of the five most talked about made it into the Sweet 16. Once again, Michigan State’s unexpected loss generated a ton of chatter.

Surprisingly, University of Arizona coach Sean Miller wasn’t one of the top five social media moments when he sweat through his dress shirt and went “persp-iral,” inspiring a flood of memes splashing the Web. Degree and Old Spice deodorant brands saw the opportunity and ran with it.

We can’t get him a new shirt but we can keep him dry in the 2nd. #MarchMadness pic.twitter.com/OIMBOcnZxI

Thirteen of the 16 remaining teams belong to the three conferences with the most share of voice, suggesting that fans of winning teams are more frequent social engagers. 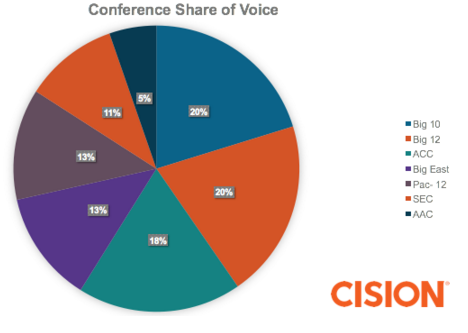 Stay tuned to Cision to see analysis after the Sweet 16 and Elite 8 rounds have concluded!