Trump’s Detractors Are Getting Louder

Ohio Governor John Kasich won his own state on March 15, but to prevent Donald Trump from winning the nomination and forcing a contested convention, he or Texas Senator Ted Cruz need to contain Trump’s vote share to 40 percent.

Fortunately for those two nominees, an anti-Trump movement is picking up steam.

Trump currently has more than half of the 1,237 delegates he needs to win the nomination. According to political magazine The Hill, if Trump maintains only 40 percent of the vote in the upcoming state primaries, he will fall 100 delegates short of a convention victory. Contributing to Trump’s slower performance are his detractors who are made up of both Democrats and Republicans.

In our ongoing collection and analysis of the social conversation, we see that the anti-Trump movement is growing. On terms such as “fascist” and “fascism” and in references to historical dictators like Adolf Hitler or Benito Mussolini, Trump is mentioned in relation to these terms more than all of the other candidates combined. 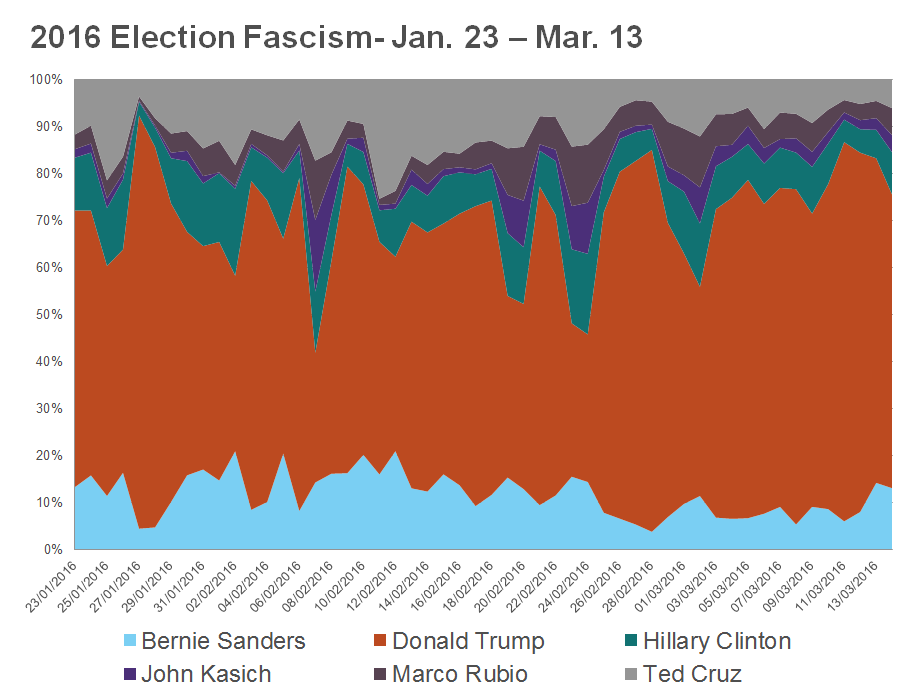 In relation to these negative terms, Trump is mentioned between 3,000 and 10,000 times a day, controlling 70 percent of the fascist or Nazi conversation. This is based off of a collection of social mentions between January 23 and March 13, representing more than 300,000 comments.

In North Carolina between February 13 and March 13, 63 percent of social commenters speaking about Black Lives Matter included Trump in their comments. This is based off more than 100,000 social mentions. 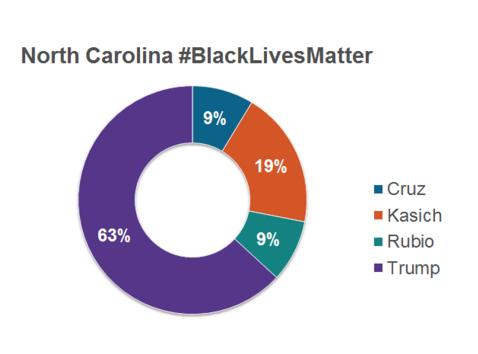 In a sentiment review of 1,000 of these messages, 92 percent were negatively toned toward the Republican front runner. Many labeled the Republican front runner’s campaign as racist, a sentiment shared by pundits such as Dana Milbank of The Washington Post and is even included as an editor’s note in every Huffington Post article about his campaign.

The first incarnation of hashtag #NeverTrump that we found, originated from @danmiller3 last July. Its usage didn’t pick up until February 25. At its daily peak on February 27, 25,000 messages included the hashtag. More recently, it has averaged 6,000 mentions a day. 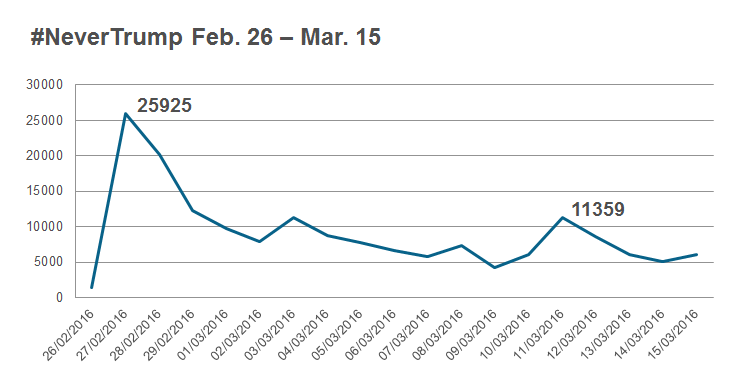 The results of the March 15 primary were remarkably close. With the exception of Florida, Trump won each of the Republican contests by a margin of less than 10 percent.

This margin indicates a loss of momentum for Trump. Compared to Trump’s victories in Georgia, Tennessee, Alaska and Massachusetts where the billionaire won with margins of at least 14 points, it seems the race has tightened.

Regardless of the outcome of the next three months of voting, the Republican National Convention in Cleveland will be one you won’t want to miss.

Images via The Trump 2016 Campaign