It was at Mark Schaefer’s closing keynote at Social Media Marketing World on Tuesday, April 19 in San Diego, where I decided that if this year’s conference had a tagline it would have been this: “Be. More. Human.”

If there is anything social media marketers (or any marketers for that matter) need to get behind, it’s that it’s past time for them to set aside their own agendas and focus on their audiences first.

Social media and connectivity are kind of an oxymoron. Social media has done a tremendous job at bringing us closer, but at the same time, it has pushed us away.

In a world where social media has done so much good, many people and brands have used it in a way that strips its human connection. It’s time to bring that back.

Schaefer’s quote, “Be. More. Human,” confirmed what most speakers touched on at Social Media Marketing World.

In this post, I want to highlight a few of those moments (in no particular order) and wrap up with a few tips from the experts themselves on how you can humanize your marketing initiatives:

“As much good #socialmedia has brought to us, it has also disconnected us from the human element.” @kimgarst#SMMW16

During the panel, “Live Video: Why the Future of Marketing is Going Live,” Kim Garst said brands should jump on the live video bandwagon as it helps build a know, like, trust factor.

People want to feel like they’re a part of something bigger. Kim believes live video helps accomplish that.

Shaan Puri, co-founder of Blab, couldn’t have said it any better. Your target audience wants to see the organic, raw form of your brand, not the manicured version.

In his session, “How to Get People to Consume Your Content In a Noisy World,” Bryan Kramer explained that to cut through the clutter and the noise, you have to embrace the stories that truly make you unique.

Brian Fanzo says that video is a great way to show authenticity and invite your audience behind the scenes. If you are doing good things, live video allows you to amplify that. People want access. They want to feel special. Take them there.

“We are now in a world where people are media.” – @jaybaer#SMMW16#socialinfluencers#influencermarketingpic.twitter.com/9Oco2g10sR — Cision (@Cision) April 18, 2016

No matter what you do, your job is to tell your story. – @garyvee#SMMW16pic.twitter.com/Ei0aBo7v2S

Gary Vaynerchuk said, “Before you tell me about your product, you need to get my attention.” Before anything else, connect with your audience and tell them your story.

Tips to humanize your brand:

As part of our good faith effort to heed the lessons from these industry thought leaders, here is a picture of Stacey Miller and myself with Mark Schaefer before his closing keynote: 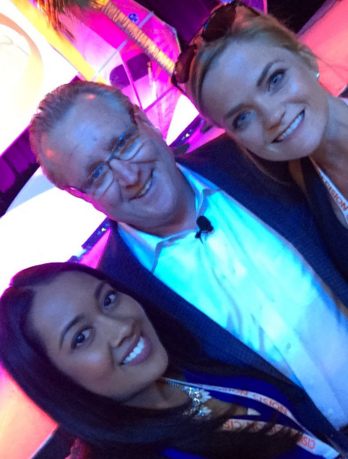 Mark wrapped up Social Media Marketing World perfectly. I will end this post the same way he ended a fantastic week in San Diego:

“We need to focus more on trust and less on traffic. In this competitive world, trust trumps everything. Be more human.”