Since its debut in 2011, Governors Ball has made a name for itself in the Big Apple. The music festival has grown from a local one-day event to the sixth most popular summer festival in the U.S.

When it started, Governors Ball had the highest attendance for any event at its original location, Governors Island. Taking note of what succeeded the first time, the festival’s producers, Founders Entertainment, moved the festival to Randall’s Island, added a second-day lineup and invited food vendors.

In the months leading up to Governors Ball 2016, and with the lineup already announced, LiveNation acquired the previously independent festival and grouped it with other major festivals, including Bonaroo, Austin City Limits and Lollapalooza. Then, AEG Live announced that its festival, Panorama, would make Randall’s Island its new home in late July.

Consequently, many have been wondering what will happen next. Will Governors Ball continue to build a loyal following, locally and nationally, despite new competition?

We decided to answer the question ourselves by monitoring last week’s festival using Cision PR Edition and Visible Intelligence. Here’s a glimpse at what the data shows and how the festival can use social insights to continue to drive it towards success in the future.

With poor weather descending on New York City and causing the cancellation of the third day of music, attendees made their feelings known. Twitter went crazy, and the number of social mentions exploded by more than 500 percent. Missing a Yeezy show sure sparks social conversation.

The final day was set to feature more than a dozen artists, including headliner Kanye West and special guest Prophets of Rage. Had the show gone on as many hoped, Governors Ball attendees would have witnessed the rapper’s first live performance since releasing his recent album, “The Life of Pablo.”

Despite social backlash, it’s important to keep in mind that 2016 wasn’t the only year a major headliner was cancelled or New York found itself under heavy rains. In 2013, Kings of Leon didn’t get to play opening night, and last year was a muddy mess. This was, however, the first year all three days were sold out.

If there’s one overlying lesson to be learned from this year’s festival, a detailed crisis communication plan that leverages real-time tactics is necessary for any event taking place outdoors.

Once the decision was made, Governors Ball quickly retweeted artists’ rescheduled show announcements, responded personally to those taking complaints to social, and promised ticket holders refunds. On Monday, they followed up with a thank you post on the website asking attendees to fill out a survey, and yesterday afternoon they hosted a Reddit AMA for any additional questions or concerns.

By communicating the moment thunderstorms threatened the area and providing attendees multiple opportunities to voice their opinions, Governors Ball successfully navigated a tricky situation with Mother Nature and kept a potentially worse scenario from playing out.

Local to Manhattan, The Strokes had the social crowd pumped on Friday night, taking 79 percent of the conversation. The band last played at the festival in 2012, but has rarely performed live regularly since then. 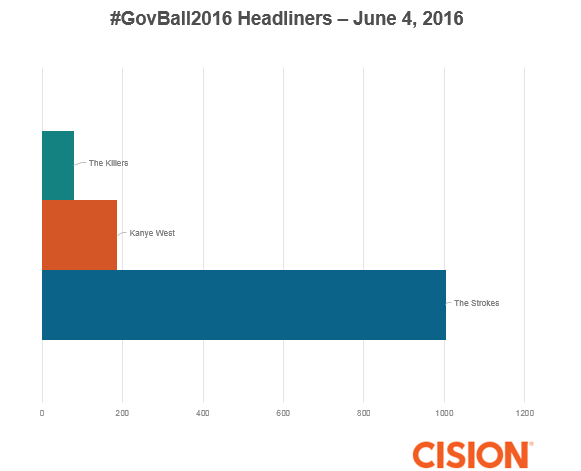 Sadly their popularity quickly dropped once the final day was cancelled. In an attempt to keep people happy, Kanye hinted at a surprise 2 a.m. sold-out show at Webster Hall via Twitter. Those who were paying attention on social made their way to the venue.

But the show never happened, despite how many people waited on the streets of New York for an epic block party. 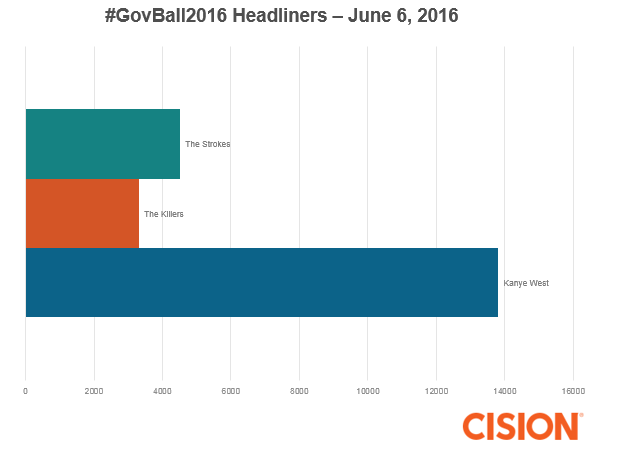 Music artists who paid tribute to the late Prince, previously played at the festival and/or acknowledged the unfortunate weather circumstances resonated most with their audiences, both live and on social.

The all-female group HAIM rocked the stage despite the rain, making a great impression on those who stayed. Mac Miller, who performed at the very first Governors Ball, and Beck, who performed in 2012, came close behind in mindshare. 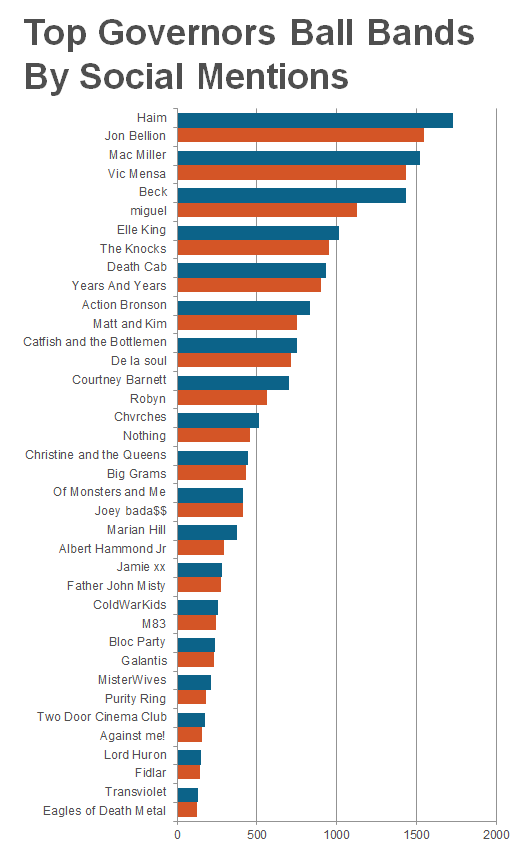 The overwhelming number of artists who were scheduled to play on the final day made it up to their followers by coordinating free or for-charity shows, which also added to the social conversation. Vic Mensa’s rescheduled show announcement had the biggest social impact after Kanye’s.

Throughout the festival, Bacardi maintained the largest share of voice mostly due to its Bacardi Deck and House stage. However, it wasn’t the only brand sponsor to have its name attached to a stage or lounge. The Honda Stage featured some of the most talked about artists, but Honda’s social posts received little engagement compared to Bacardi’s. 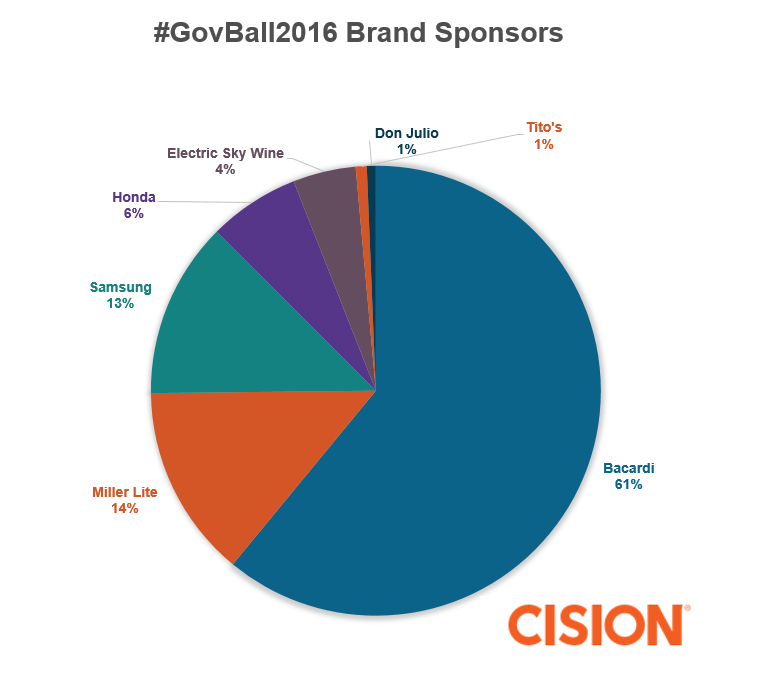 Of the 14 media partners, Snapchat stole the Governors Ball on social, with Billboard and Rolling Stone following closely behind. This could be attributed to the recent increase in Snapchat users, the generally younger crowd at Governors Ball and the appeal of live streaming real-time events with friends and family. 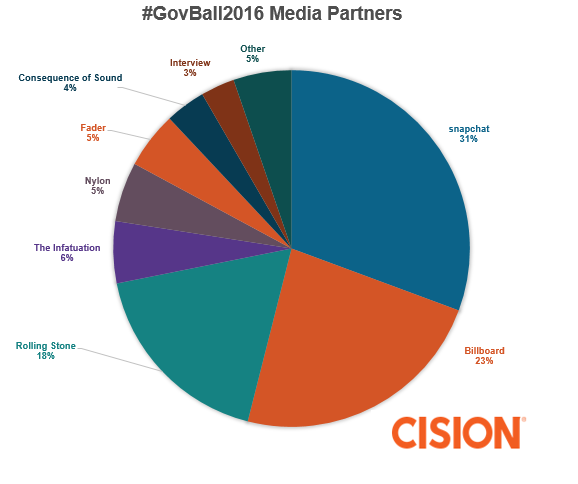 With over 50 delicious food vendors present at this year’s festival, attendees had a lot of vegan, vegetarian and other adventurous options to choose from when hunger pangs hit.

Governors Ball officially announced its #govballeeeeeats lineup on April 27. Black Top, which had the most mentions over the weekend, didn’t waste any time in promoting its exclusive “Black & White” shake with Infatuation New York. The campaign certainly paid off.

Other top food vendors, including Mac Truck, King of Pops and Try Vegan, were either local to New York City, food trucks or a combination of the two.

Governors Ball 2016 certainly had its highs and lows. Whether or not it continues to attract an eclectic mix of artists and enormous crowd may depend largely on how well LiveNation and Founders Entertainment listen to what’s being said on social about the weekend-long experience.

Sunday’s looming forecast and resulting cancellation caused a major shift to negative-neutral only sentiment across traditional and social media. 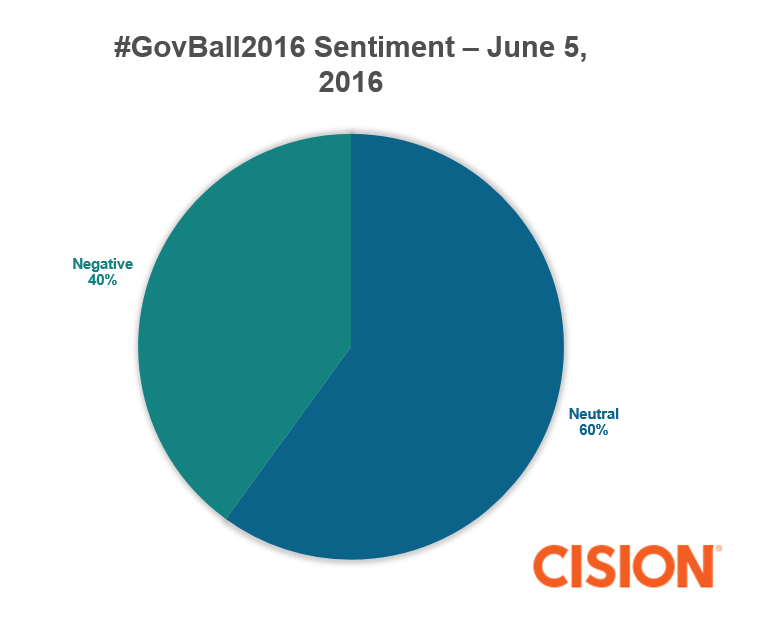 Yet, that one unfortunate day didn’t rain on everyone’s parade. Overall sentiment for the three-day event remains positive. 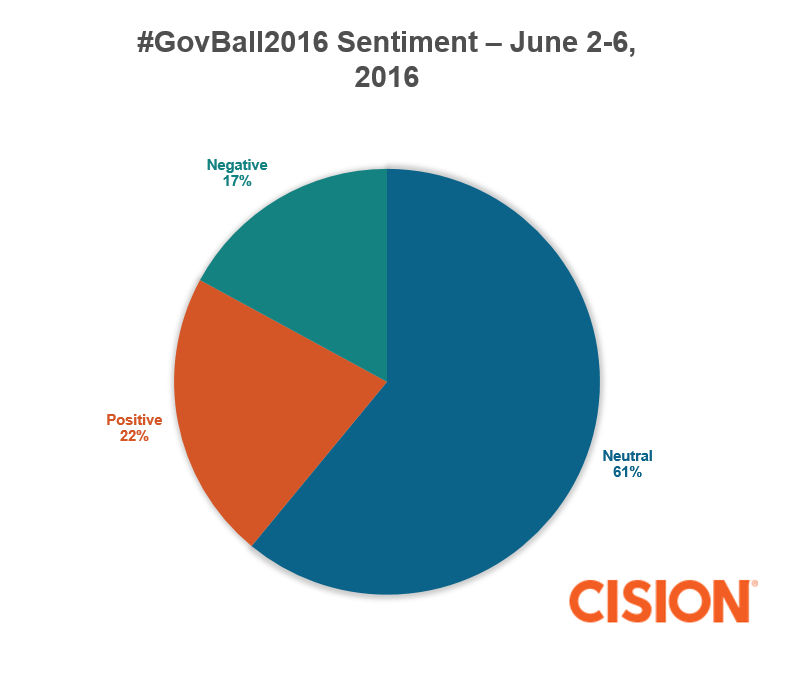 Will your brand melt in the rain or stand the storm? With Cision’s award-winning software, you’ll get all the insights needed to make the right decisions during an unavoidable crisis.