Democracy in the Data: Analyzing the Convention Conversations

This year’s presidential candidates are proving to be historic: the first woman and a billionaire businessman turned reality television star are the official nominees for president of our two major political parties in the United States. As it often is with politics, this election is as much about feelings as it is about fact. To help measure the presidential pulse we have turned our attention to evaluating the data in the public responses to the Republican National Convention in Cleveland and the Democratic National Convention in Philadelphia. 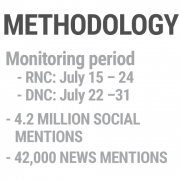 Cision monitored the conversation (news and social media) discussing the major political events. We monitored media mentions for both of the conventions beginning on July 15 and ending on July 31, or three days prior and three days after both conventions.

Listening to the conversation about your brand or client is critical to staying on top of your key messaging: both news and social media. But what if you’re only listening to one of those channels?

Today’s communication professionals should have one ear on news media and the other on social media. If you’re only tuning in to one, you’re bound to miss out on vital opportunities to help shape and lead the conversation around your brand or client.

To monitor both events we didn’t just track hashtags; we also used thousands of keywords and phrases from speeches and party platforms to track the public’s response.

The data we collected showed that out of all the guest speakers at the RNC convention, Melania Trump’s speech was discussed most often. 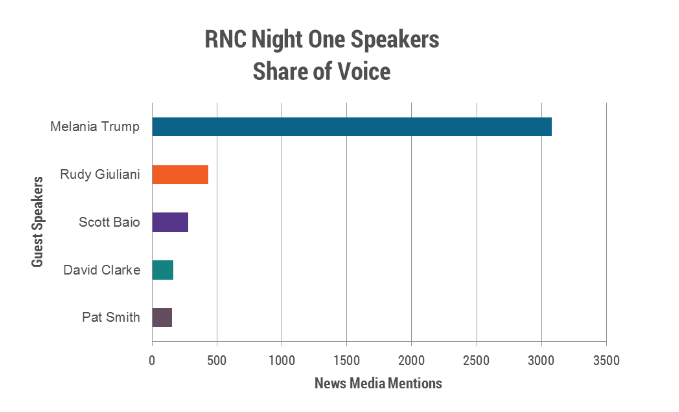 For night one, Melania Trump had more than 56 percent of the total share of conversation out of the scheduled speakers.

If we take a look at all of the guest speakers across the four nights, Melania Trump still holds the largest share of voice: More than 23 percent of the total share of voice for all guest speakers. (Followed by Ted Cruz: 12.02 percent, Mike Pence: 9.94 percent, Chris Christie 4.48 percent and Ivanka Trump: 3.71 percent.) 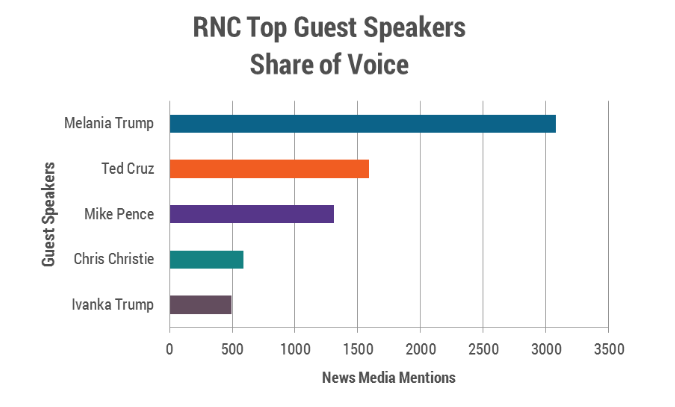 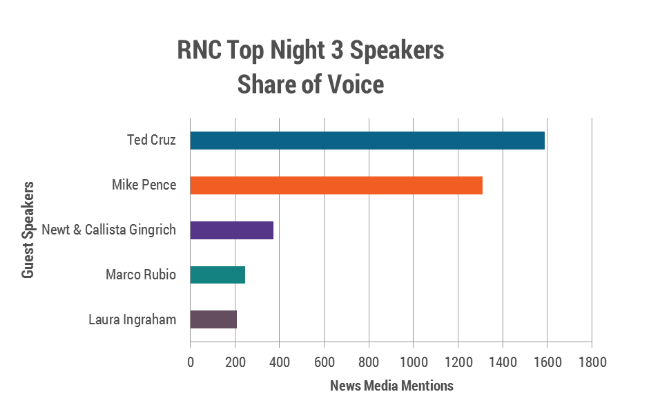 Even with Cruz’s impactful commentary, on social media Melania Trump’s speech had the second largest response. Second only to Donald Trump himself. 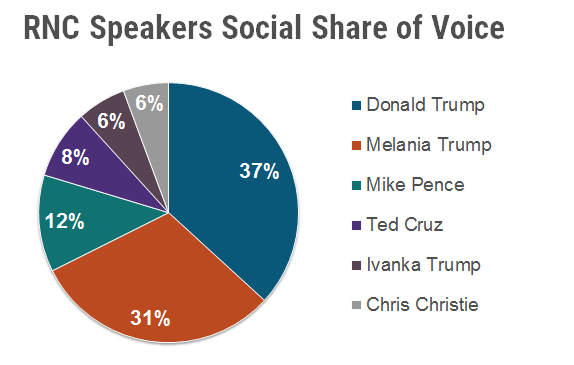 We identified campaign distractions as 26 percent of the social conversation of the Republican National Convention. 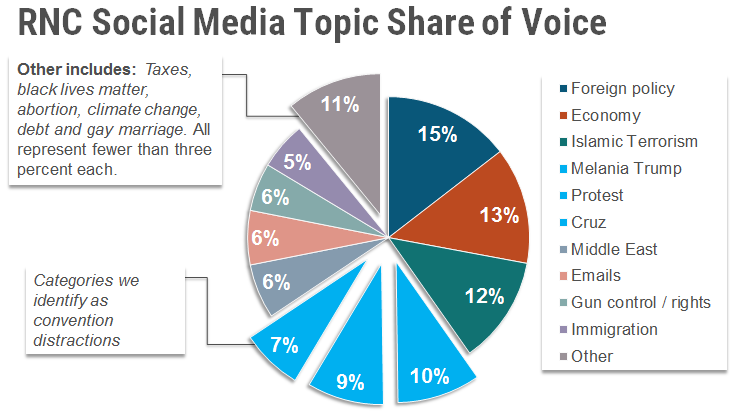 While foreign policy, the economy and terrorism led in conversation share of voice, these represent a substantial distraction from the main argument presented at the RNC. As an example, only 6 percent of the social discussion at the RNC revolved around the Hillary Clinton email topic.

Meanwhile, the DNC had its own distractions. Protests by some delegates and an email hacking incident accounted for 23 percent of the share of voice. 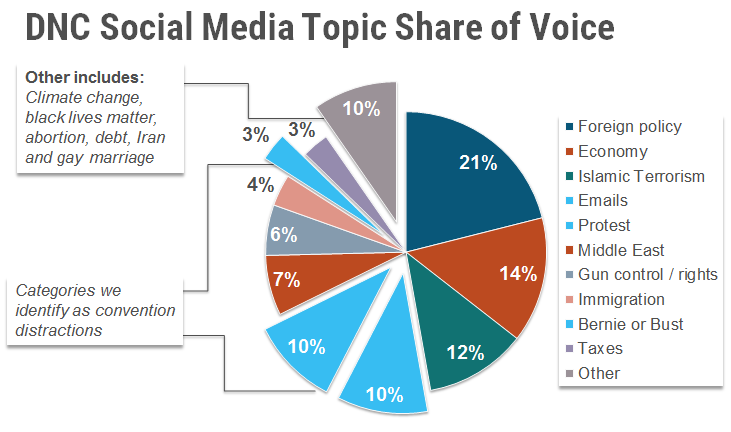 Which Convention Had the Greatest Impact? 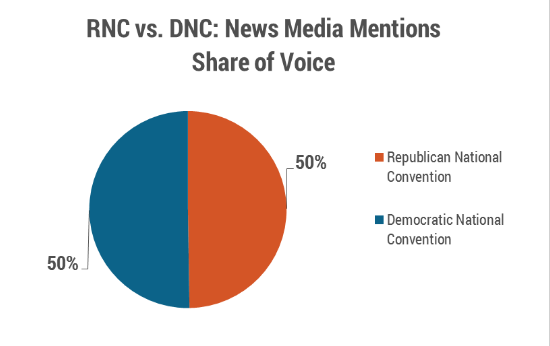 If we take a look at social media mentions, however, it’s a different story: 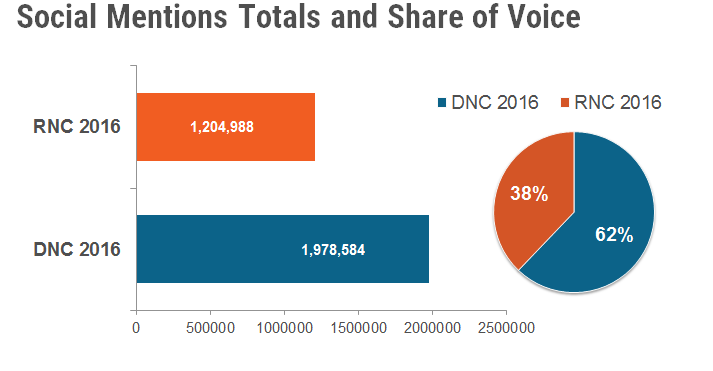 Content is king, even at a national convention. The DNC had more speeches (133 compared to 71 at the RNC convention, according to the LA Times) and reportedly more television viewers overall according to New York Magazine.

What Dominated at the DNC?

Despite Michelle Obama’s speech during the opening night, it was President Obama who held the largest share of voice for the headlining speakers.

When we take a look at the data for all headlining speakers for the Democratic National Convention, Bernie Sanders held the second largest share of voice (more than 28 percent of all the speakers combined), more than the current First Lady, Vice President Joe Biden and former President Bill Clinton: 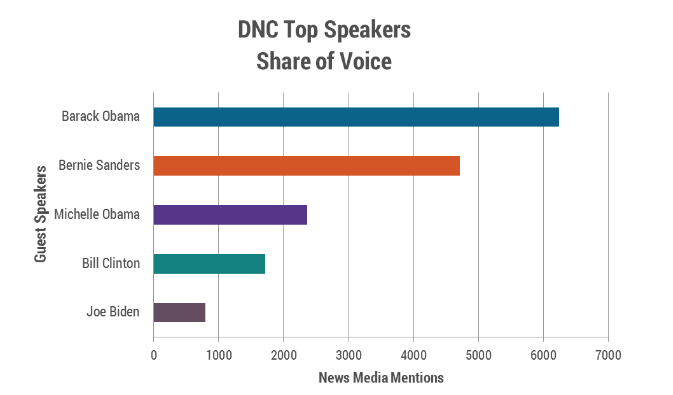 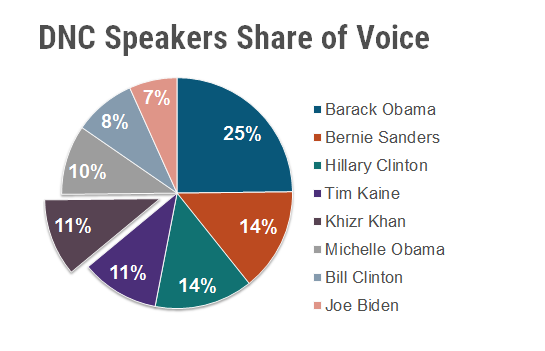 Huge Benefit for Both Candidates 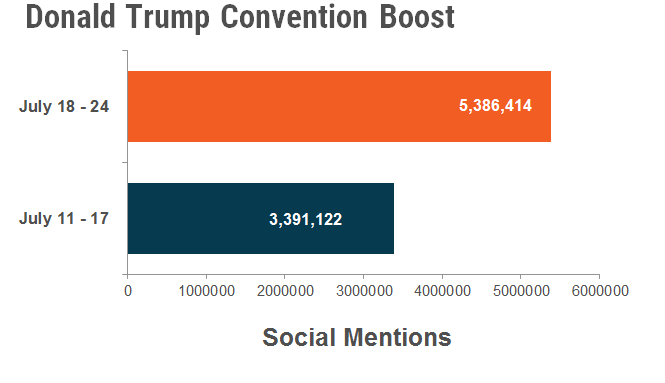 Hillary Clinton received a 104 percent increase in news and social mentions week over week between July 15 – 24 and July 22 – 31, making it the greatest week of engagement in her campaign thus far. Even so, she is still far behind Trump in share of voice on social media — Trump received 140 percent more mentions than Clinton during the week of both candidate’s conventions. 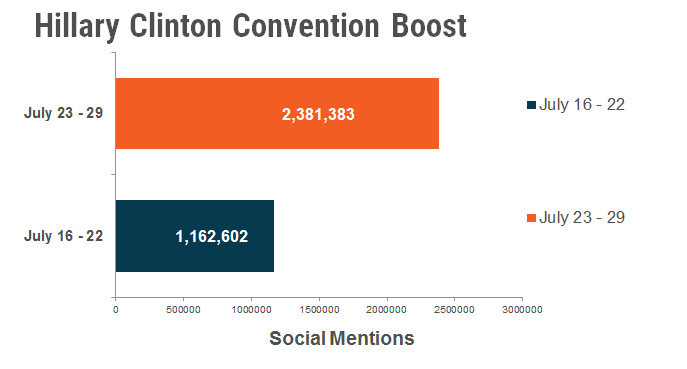 The media and commenters on social channels spoke more often about Ted Cruz than Mike Pence. The DNC had more news and social media mentions than the RNC, yet Donald Trump was still mentioned 140 percent more often than Hillary Clinton.

Discovering key data distinctions like this can play a vital role in developing your communication strategies. Moments can capture the attention of millions but unless you’ve been listening, insights will pass you by.