The Trump-Clinton Enthusiasm Gap is Real

Regardless of the content or themes presented by both candidates, there is a substantial gap in enthusiasm on social media in favor of Donald Trump.

In an analysis of voting intention statements and campaign hashtags on Twitter over the past 30 days (Sept. 11 – Oct. 10, 2016), Cision has found that Donald Trump’s supporters share 657% more posts than supporters of Hillary Clinton. A large difference is also found in the number of authors — 384% more individuals have posted statements of support for Donald Trump, than those for Hillary Clinton. 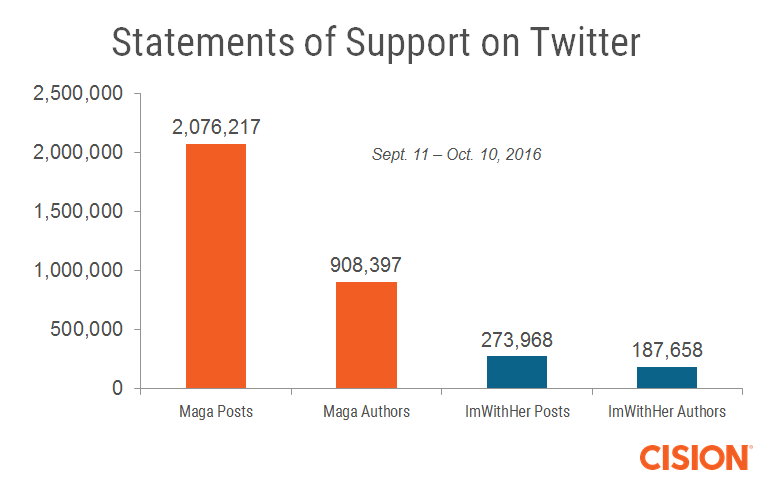 The difference in the number of posts and the number of authors is stark. Donald Trump has received more than 2 million posts using supportive phrases or his campaign hashtags, compared to Clinton’s 273 thousand posts using hers.

Trump has more supporters vocalizing support on Twitter than Hillary Clinton, with more than 908,000 authors compared to Clinton’s 187,000. 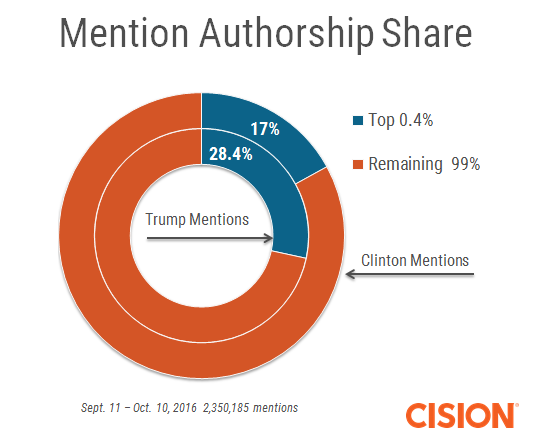 However, a much larger proportion of Trump’s mentions are being created by an incredibly active minority. We reviewed the number of posts per author to see how active discussion participants are and found that the top 0.4% of authors for both candidates are creating an inordinate amount of the conversation.

For Clinton, 810 of her most active posters – those creating 50 or more mentions during our monitoring period – created 17% of the mentions. For Trump, the ratio is more pronounced. Just 3,067 Twitter authors created 28.4% of his statements of support.

Trump’s base of support on Twitter is levied by 88 authors who created 500 or more posts in 30 days using #MAGA or #MakeAmericaGreatAgain hashtags. 13 of the 88 published more than 1,000 of these posts in the past 30 days, and four authors created 10,000 or more Twitter posts using these hashtags during our monitoring period.

Benefit Found During Debates
In an election, perception is often reality. And during any election event, like Sunday’s debate, having more authors posting a great number of mentions provides the appearance of success.

Trump held less pronounced leads In the battleground states of Nevada, Arizona, Florida, Pennsylvania and Ohio with between 20% and 30% less share of voice. 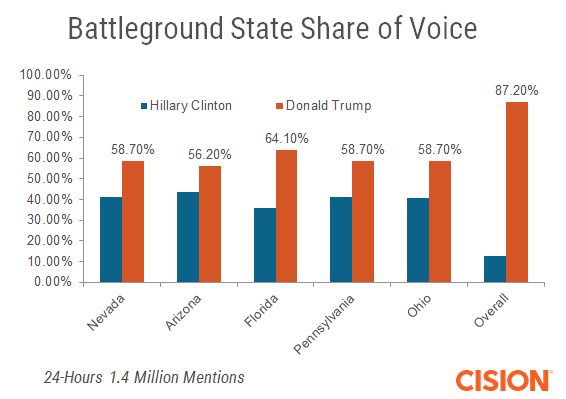 Polling by NBC and The Wall Street Journal show that Trump’s support is in freefall among likely voters. The Trump campaign’s response is that he can still draw thousands of people to his rallies, and in their opinion that’s a greater indicator of support than someone’s answer in a poll.

If it came down to a race for people’s attention, Trump is winning.

When we look at social media conversations, where one candidate has 384% more authors and is producing 657% more comments, it is difficult to come to another conclusion than the obvious: Trump has a more vocal and engaged base of support on Twitter.

Yes, a lot of that discussion is about ongoing controversies. More than a third of Trump’s social discussion is about comments he made in 2005, 10% of his share of voice between Oct. 6 and Oct. 10 mentioned the possibility that Trump may drop out of the race. 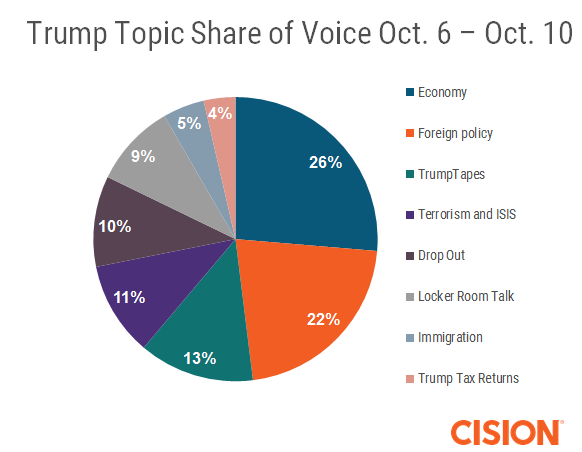 However, even with all of that, there are still more people discussing his policies than are discussing Hillary Clinton at all.

If all press is good press then Trump is the master of publicity. More often than not this pattern resulted in votes during the primaries, no one will know until November whether the same holds true for the general election.

Monitoring social media conversations and analyzing trends can help your brand deliver customer wins any time of year. Request a demo of Cision’s software to find out how we can help. 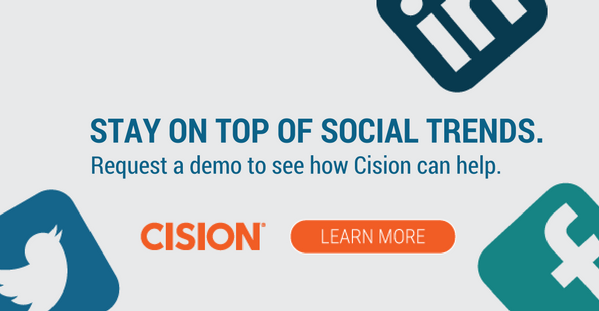 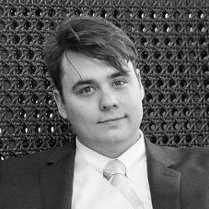