Of the three pillars of the marketer’s media mix — paid, owned and earned — earned media can be the most challenging to measure. It’s hard to draw correlations between vanity metrics like share of voice with business outcomes like shopping cart conversion and demand generation. This has resulted in it receiving a backseat to paid media in most corporate budgets.

Sometimes, it feels like paid media budgets are invincible. Despite Facebook’s measurement problems, Google’s ad controversy and $7B of fraud allegations, the dollars keep flowing. According to research data from eMarketer, “digital ad spend will increase 15.9 percent in 2017, hitting $83 billion.”

But in the run up to this year’s Advertising Week conference in New York, it seems CMO patience has started to wane. This creates a ripe opportunity for communicators who manage earned media programs to secure better budgets in 2018. But it’s important to understand the root of the paid problem and have a strategy for how to capitalize on it when positioning earned media. Ironically, earned might be just the thing that improves paid.

Understand the Problems with Paid Media

While marketers knew paid media programs had problems, it took some key industry leaders to push for more accountability. Perhaps the most heralded example happened this summer when Procter & Gamble announced that it had cut $100 million in digital marketing spend and none of those cuts impacted revenue outcomes. As the Wall Street Journal reported, many of these wasteful ads ended up on sites with fake web traffic along with inaccurate conversion metrics driven by bots.

P&G said it will continue to cut spend to the tune of nearly $2B during the next five years. “The days of giving digital a pass are over,” P&G’s Chief Brand Officer Marc Pritchard said at the Interactive Advertising Bureau’s Annual Leadership Meeting, urging the rest of the industry to follow P&G’s lead. “It’s time to grow up. It’s time for action.”

As brands start to quantify the extent of their ad waste, there’s also the anecdotal fatigue many feel in dealing with an industry that thrives on jargon and a convoluted ecosystem. For years, many marketers didn’t know how to ask the right questions or in some cases might have felt embarrassed to ask. The result was an all-boats-rise in the advertising market.

But it would be hasty to say the days of paid are done. Far from it. As my boss, Cision CEO Kevin Akeroyd explained in a recent Adweek article, “Big brands cannot suddenly pull out in any kind of mass-scale way. Advertisers are not going to be able to back out of the decade-long investment they’ve made in digital….I don’t think Wall Street is going to allow them to do that. [But what] you are going to see is digital ad spending becoming more responsible, held more accountable,” said Akeroyd. “You’re going to see where [brands] look more to earned media. They are going to look to fill that void.”

Define Earned Media and Why It Matters

Communicators need to uplevel their message to focus on earned media rather than PR. There are plenty of data points that validate people trust earned media more than paid and owned. While the rise of fake news and the poor coverage of the United States presidential election likely dug into its lead, most credible consumer research indicates that trust in earned is highest.

If these studies were more accurate about defining earned media, I believe the numbers would be higher. Brands often designate paid celebrity endorsements or pay-for-play content disguise as “earned” when it really isn’t. At Cision, we’re still purists. At Cision, we define earned media as follows:

Earned media is content that mentions a brand, created by people who aren’t paid by that brand — such as journalists, individual influencers, and regular consumers. Earned media appears across a variety of channels and outlets, including social media, journalistic outlets, and online communities.

The distinction here is important because there are so many pieces of media today that are disguised as earned media, such as paid content placement or celebrity engagement on social media. It could seem like authentic interactions, but they’re not any better than paid.

For all of paid’s problems, people who work in earned media shouldn’t throw stones. Traditionally, earned has relied on vanity metrics that only track potential reach. Earned Media Value (EMV), as an example, is the much-maligned way to calculate an approximate return on investment by understanding the estimated number of impressions some placed media generated.

To elevate themselves in the budget conversation, communicators must have a framework that ties engagement metrics to actual business outcomes. AMEC’s Integrated Evaluation Framework offers a good start. It starts with key business objectives that a company wants to drive, such as shopping cart conversion or lead generation. Once those are stated, communicators then need to define inputs and outputs where they measure themselves against those outcomes.

At a certain point, the sophistication of the model does depend on technology and the granularity of tracking end-user behavior. The first step is tracking what audiences consumed a piece of content on a media or publisher site. Once that audience data is obtained, it needs to be matched against customers who performed key business behaviors, such as shopping cart conversion or becoming a contact in a lead generation program. As we discussed during our world tour, Cision is investing in innovation initiatives to support that effort.

The good news is we can start to borrow the same tracking technology that is used in paid media. But if we don’t learn from the measurement mistakes of paid, earned media will be doomed to repeat it. 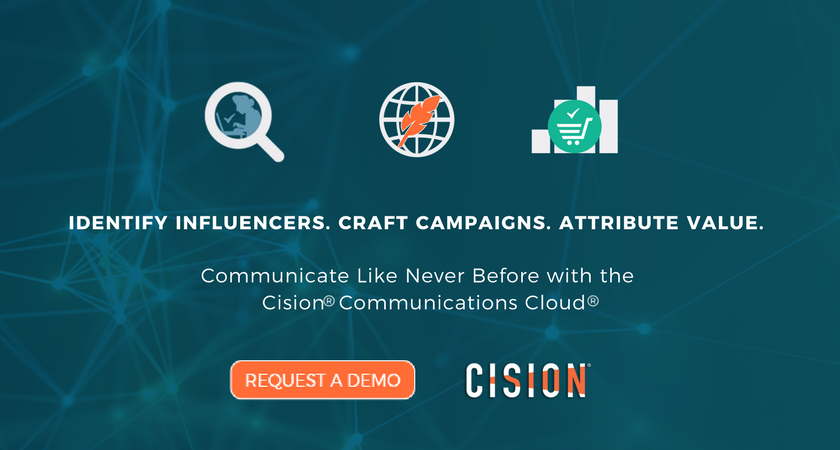