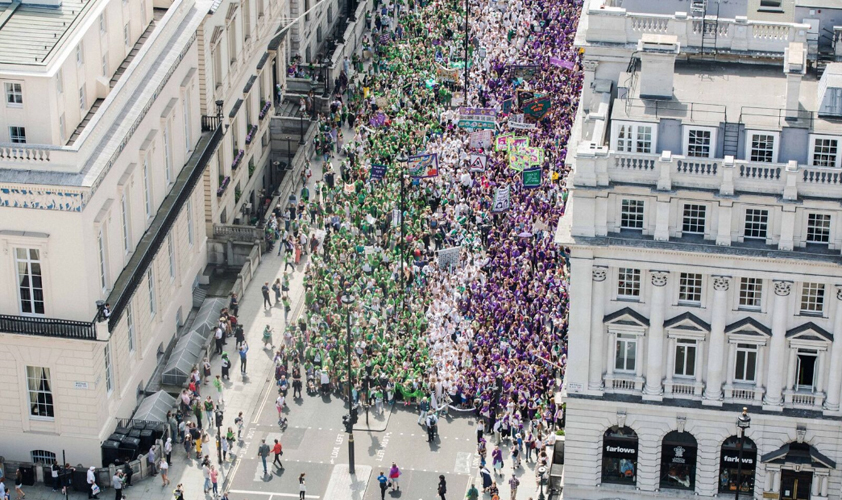 Flint created a media relations campaign to help Artichoke drive awareness of its PROCESSIONS march, which celebrated the 100th anniversary of women first being able to vote.

Leading producer of art in the public realm, Artichoke retained Flint for a UK-wide mass participation artwork called PROCESSIONS. Commissioned by 14-18 NOW, PROCESSIONS was conceived to celebrate 100 years since the first British women won the right to vote.

On Sunday 10 June, thousands of women and girls celebrated the centenary of female suffrage. Walking through the streets of Belfast, Cardiff, Edinburgh and London wearing scarves in the colours of green, white and violet, they appeared as a living, moving suffragette flag.

This unique artwork was captured on a live BBC One broadcast hosted by Kirsty Young, with additional presenters on-the-ground in all four cities.

An extensive programme of creative workshops were held in the lead-up to the event, with 100 UK organisations commissioned by Artichoke to create centenary banners in collaboration with female artists. The handmade banners, echoing the suffrage tradition and expressing women’s contemporary hopes and concerns, were carried proudly on the day of PROCESSIONS.

Flint’s remit for the campaign focused on media relations and using press coverage to drive awareness of, and participation in, PROCESSIONS on a local, national and international level.

Complemented by a national marketing campaign (encompassing social, digital and out of home advertising) run by Artichoke’s in-house team, Flint was responsible for encouraging pre-registration for PROCESSIONS, as well as driving on-the-day attendance to take part in the event.

In addition, the agency was tasked with ensuring media cut-through for the project’s commissioners 14-18 NOW, major sponsors including Natwest and Pink Parcel and betty, and key partners including the Wales Millennium Centre and local authorities in the four participating cities.

Finally, Flint’s campaign aimed to ensure a lasting legacy for the project through positive endorsement in the press and photography and videography documenting the artwork across the UK.

Flint put in place a strategy which promised to deliver varied, engaging coverage, raising awareness of the processions in each city, while simultaneously conveying the key messages of the artwork as a whole.

It created different messaging for each country, taking local contexts into consideration and utilising local spokespeople in order to ensure strong regional coverage and buy-in.

Flint’s early campaign focused on the craft element of the project, promoting news and features to raise awareness of the 100 UK organisations creating commissioned banners.

With less than a month to go until PROCESSIONS, the campaign switched to focus solely on driving attendance, calling on women and girls to participate in a once-in-a-lifetime public artwork.

A critical mass of coverage in this preceding month resulted in a major spike in registrations, with thousands more participants signing up in the final seven days of the campaign.

The campaign culminated with a day of on-site press activity taking place across all four cities. Both national and regional broadcasters were along every route interviewing key stakeholders and participants for news packages which ran from 6am until 10pm.

In London, Flint accredited over 80 members of the press, including coordinating access to elevated vantage points for photographers, videographers and critics. An additional 50 press were accredited to attend the processions in Belfast, Cardiff and Edinburgh, with both the BBC and ITV covering all four routes.

Tens of thousands of women and girls took part in the PROCESSIONS marches, forming the visual effect of a living, moving suffragette flag moving through the city streets of Belfast, Cardiff, Edinburgh and London.

PROCESSIONS quickly became the number one trending topic on Twitter across the UK, with a significant number of press outlets, including Bloomberg, The Pool and Stylist, live tweeting at the events.

Flint secured front page coverage in The Times, the Guardian, The Scotsman and The Herald on Monday 11 June, with additional print coverage running in The Daily Telegraph, Daily Mirror, i, Daily Mail, Metro Scotland, The Scottish Sun, The National, The Irish Times and The Irish News.