How to Turn Your Slow News Day into a Conversation-Starter

The most boring day of the 20th century was April 11, 1954, according to a Cambridge computer programmer. Except for a Belgian election and the birth of an obscure academic, nothing at all newsworthy happened that day.

Communications pros can relate. Every company goes through periods where it seems like there’s just no “new news.” There’s a lull between new products, no recent award-wins or expansions to announce, and (thankfully) no major crises.

You could just take a long lunch and tell yourself that no news is good news. But comms pros also know that in today’s crowded content landscape, they have to keep their brand relevant. If they don’t, their competitor will swoop in and snatch up that audience of potential customers.

And a press release is still one of the top ways to earn coverage. They rank high in search, and journalists still love the press release, according to Cision’s 2018 State of the Media Report: https://www.cision.com/us/resources/white-papers/2018-sotm/.

So how do you stay in the conversation without traditional news to share? You get creative, by conjuring relevant, engaging news out of the void. They key is to start by considering your intended audience: what do they care about, what do they need, and/or what common interests do you share?

Here are five ways that can be done effectively:

We’re living in an era where everyone has an opinion and a place to broadcast that opinion. Anyone can be an activist, just by logging into Twitter, Facebook, YouTube, etc. So why not harness that energy your audience already has, and turn them into an activist for your brand?

Think of a larger issue that your company has a stake in. That could be sustainability, a charitable effort, or even a small, fun change that both you and your consumers could get behind. Then come up with a way that you and your audience can join forces to take action. Start a petition, propose a day of advocacy, or launch a social media campaign. But be sure to broadcast that content over a wide distribution channel that will catch the attention of new audiences. 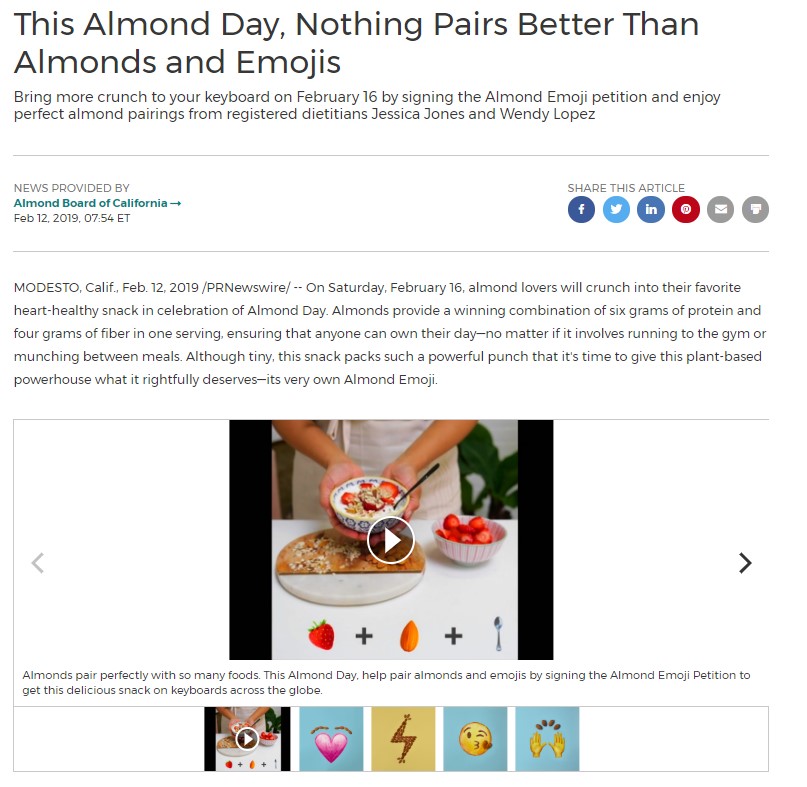 How did we communicate before emojis existed? With boring old words? The Almond Board of California has clued-in to our national obsession with those cute little pictures, and they’ve turned their fans into an army of advocates for their proposed Almond emoji. The light-hearted subject matter for this press release lends itself to great visuals in the form of a video and almond-emoji photos. Those elements make this release more appealing to online readers, journalists, as well as search engines. Plus, by giving their audience something to DO with this news – to sign a petition – the Almond Board can intelligently track the success of this effort by measuring website clicks. And it’s likely those engagement actions will convert even more almond devotees, even if the emoji endeavor doesn’t pan out.

2. Start a dialogue with your audience

Do you know what your audience cares about? You can do market research to find out, or you can start a conversation. Give your fans and followers an opportunity to provide feedback on your brand. A direct appeal to your existing or new audiences can be effective if you pair it with information they need to know. In other words, it’s a two-way street: Give them information they need, and ask for information in return. 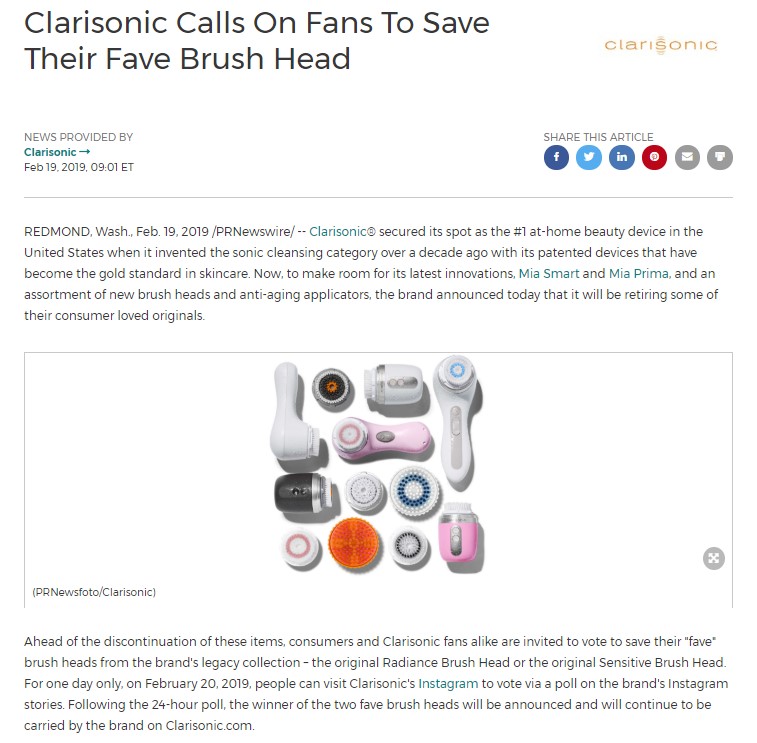 Clarisonic is doing double-duty here: Teasing their newest products, while soliciting information from their audience about the old products they love. Rather than just reissuing the same August new product announcement, they’re keeping it relevant with a new endeavor that brings value to readers, and real-time, actionable data to the brand. Plus, distributing over a wire newsline puts this in front of potential new fans. And again, they can easily and quantitatively measure the success of this effort by tracking clicks on their call-to-action link, conveniently located in the second paragraph, to their Instagram where the poll will be held.

3. Piggyback on a current event

Corporate communicators are already dialed-in to trends and current events in their industry. But rather than being passive consumers of news, they can get active and make themselves part of the conversation by issuing unique and informative commentary on those topics that are related to their company.

Let’s put some big flashing lights around that phrase: “related to the company.” That means the news has an actual connection to your company’s core mission. You don’t want to jeopardize your clout by weighing in on a topic your company doesn’t have expertise in. For example, audiences won’t put much stock in a car company’s thoughts about pharmaceutical policy, but readers would want to hear what they have to say about emission standards. 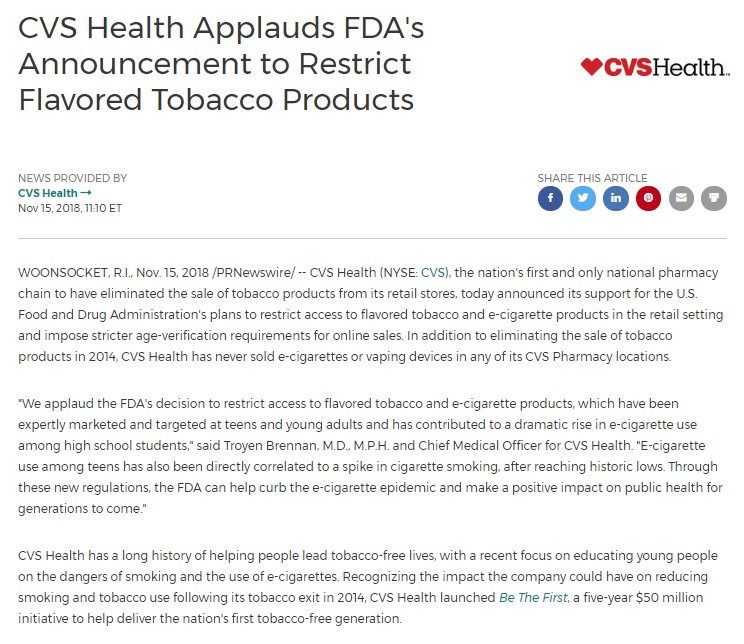 CVS put out their statement on the same day the FDA announced their new initiative. Clearly they have a solid structure for monitoring news in their industry. And since they’ve built up a reputation for their anti-tobacco stance, they have the obvious credibility and expertise to comment on this change. And in doing so, they get to remind their fans and new audiences of the policies and actions they’ve already taken to reduce smoking and tobacco use. It’s a perfect opportunity for a legitimate “humble-brag” that adds something useful to the overall conversation around tobacco products.

4. Celebrate yourself– and your values

In other words, throw yourself a party! You don’t need to wait to be handed an award to celebrate your company’s smaller wins. Every company has an anniversary, some lower-level personnel changes or restructurings. Turn those small events into an opportunity to re-introduce yourself to the world and talk about what makes you unique. 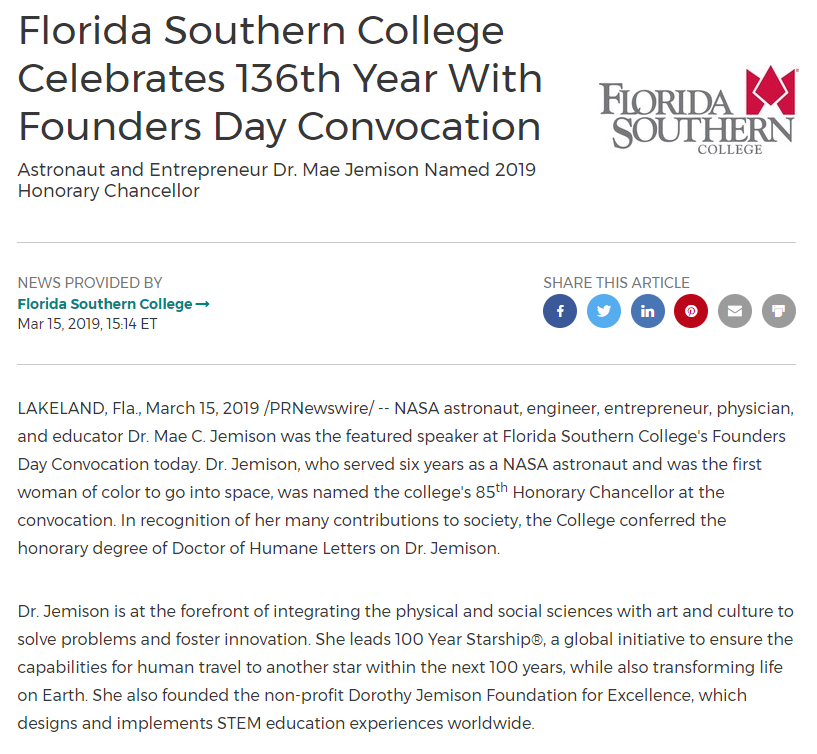 While a 136th anniversary may not seem like an obvious milestone to share as news, Florida Southern Colleges take it as an opportunity to re-introduce themselves to their audiences, both old and new. But they’re not just making it all about themselves, either. Rather, they demonstrate their values by honoring an accomplished astronaut and the first woman of color in space, someone who exemplifies the kind of greatness that Florida Southern College hopes to inspire in its students. An anniversary release can be so much more than just an organization patting itself on the back for its longevity, when it’s done right like this.

Almost every company has a corporate blog and social media channels where they regularly publish content to entertain and inform their audience. But if you’re not also distributing that content as a press release, you’re missing out. That kind of soft / feature-type news works great when edited into a news release. And, by distributing it over a wire service like Cision’s PR Newswire distribution, you can reach audiences beyond your existing followers. Plus, in Cision’s 2018 State of the Media Report, journalists said that original research and market data is one of the most valuable forms of content they can get from their PR contacts.

It’s important to note that you can’t just take your blog post word-for-word and call it a press release. A press release has to have a news angle and clear attribution. That’s because it’s not just being posted to your website; it’s also being sent directly to media and posted to third-party websites. So you’ll need to tailor a headline that will alert readers to who you are, as well as context for why they should consider you an expert. 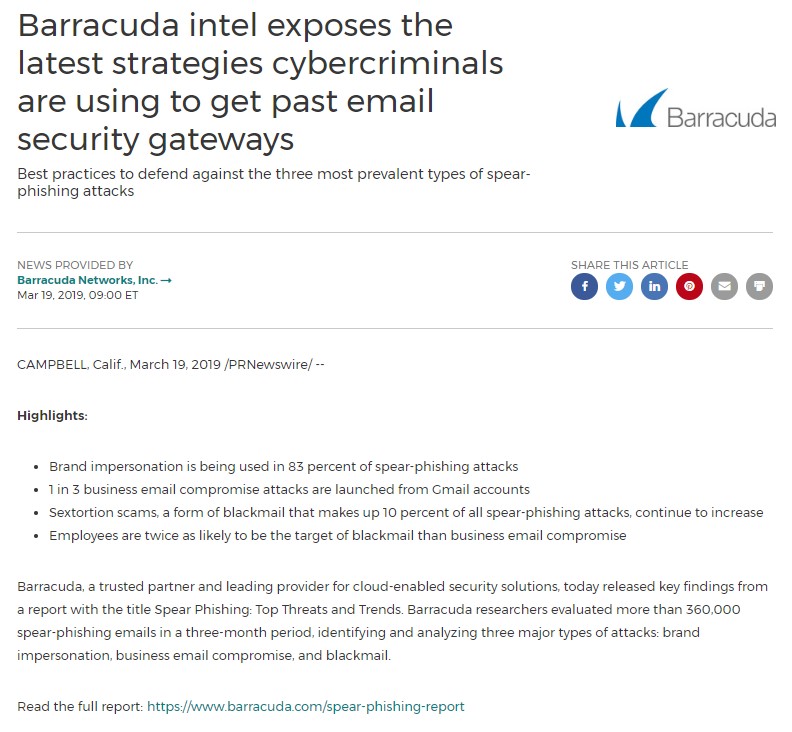 Barracuda’s phishing report could have done pretty well, had it just been posted to their blog’s subscribers and broadcast to their 13,000+ Twitter followers. But they knew this information was relevant to a larger audience than just their current fans, and that wire distribution would expose them to thousands of new eyes via potential earned media coverage and online visibility. So they edited the content into press release: Turning the blog headline of “Free in-depth report” and into a more news-focused press release headline of “Barracuda intel exposes the latest.” They also take care to introduce themselves and provide a basis for their expertise in the press release, and they reel-in readers with a highlights section and easy access to their call-to-action link under that first full paragraph. In short, this one piece of content is doing double-duty: Engaging their current fans and converting new customers.

So the next time you find yourself in a slow-news slump, either get creative or risk missing out on that lead-generating buzz. And check out Cision’s 2018 State of the Media Report, for more insight into what journalists want from their PR contacts, and how press releases are still seen as a trusted source of news.

(And keep your eyes peeled for the 2019 report, coming soon!)

Jennifer Tolhurst is a Content Services Manager at PR Newswire, where she leads a team of editors to prepare client news for distribution to optimal audiences. She probably spends too much time reading and thinking about press releases. As a result, she’s always happy to consult with organizations on how best to craft their corporate content for SEO, earned media pick-up, investor consumption and more. She welcomes fellow content nerds to connect with her on LinkedIn.