Meet the Journalist: The Sun on Sunday’s Clemmie Moodie 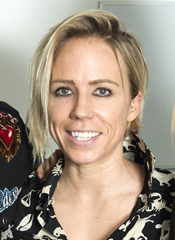 You were recently named Showbiz Reporter of the Year at last week’s Press Awards, how does it feel to win such a prestigious award?

It’s been an amazing few days, and still hasn’t really sunk in. I’ve been nominated three times previously – and never won – so felt like the Glenn Close of showbiz journalism. Unfortunately, I got a tad over-excited at the awards do, and lost my trophy…

What made you want to go into showbiz journalism?

I stumbled into it really; my first boss took one look at my CV, and told me it was “too sporty” – I wanted to be a sports journalist – and suggested work experience in features and showbiz. Fifteen years later…

How has the immediacy of online changed the way you report?

The immediacy of online can make life tougher on a Sunday paper as it is that much harder to find stories that hold all week. But at the same time it’s great because big stories or interviews spread quicker and have more impact, faster.

Which stories do you find are most popular with your audience?

Quirky stories to do with really big British stars always do well with readers, and obviously any whiff of scandal, or misbehaving celebs always goes down well.

Last year, our front page story about Strictly Come Dancing love rat Seann Walsh drunkenly kissing his married partner, Katya Jones, got a huge follow up – it had the ideal ingredients: a huge TV show, graphic snogging (we had video as well) and just the surprise element of this unlikely pairing.

Obviously social media has changed things massively, not only in the way we report stories but often how they’re found in the first place.

A celebrity now has a direct relationship with fans, meaning that if they want to break news first, can do so in this way. In this regard, it can make our jobs trickier. But also, social media can be really helpful in terms of getting feedback from readers and generating ideas for stories.

Good, hopefully! I am pretty straight, and won’t promise something I can’t deliver. To PRs I like and trust, I will always go out of my way to give a heads-up on stories, and go through all the key points in detail so we can work together and ensure everyone is happy.

I have a slight aversion to the phone, so generally prefer to text/WhatsApp/email. But if it’s a massive story, clearly it’s much better to speak on the phone.

Finally, what would be your dream story?

For me, anything which sets the showbiz/news agenda for the week and gets people talking is what makes this job exciting. I also long for the day a Premiership footballer comes out – and receives the support and backing of the nation (and loads of amazing new deals).