Inauguration 2021: A Look at Key Themes and Coverage

Analyzing media coverage of the inauguration of Joe Biden

If history is slated to repeat itself, Wednesday’s inauguration – and the days leading to it – were a noticeable exception. From a virtual crowd and absent president to the swearing-in of the country’s first female and person of color vice president – the inauguration of President Joe Biden was historic.

For hopefully the last post of Cision’s State of the Election series, we’re going to dive into the media coverage surrounding the inauguration and reveal our non-partisan takeaways.

In terms of ratings, the inauguration of a United States president demands the world’s attention. President Obama’s first inauguration was one of the most-watched TV broadcasts of all time and attracted more than one billion global viewers.

The sheer volume of media coverage is no different. From January 1, 2021 to Inauguration Day more than 194k stories were published across traditional and online media, globally. Compared to the inauguration of Trump, the number of stories is up 26%. Though, the bulk of the difference resulted from the unfortunate events leading to Inauguration Day.

When you think of an inauguration speech – what do you think of? Calls for unity, promises of prosperity, pleas for peace?

However, the jaw-dropping events leading up to Biden’s inauguration caused coverage to take a different turn and become riddled with unpatriotic rhetoric. Five of the top 10 themes included:

Furthermore, conversations about Antifa, Proud Boys and QAnon received thousands of mentions; whereas four years ago, these were largely unknown topics.

Throughout the 2020 presidential campaign, Reddit proved to be Biden’s strongest social channel. Receiving 10 to 25x more engagement on Reddit became the expectation. Facebook and Twitter, however, were more equitable in their social coverage. Seeing left-leaning inauguration content receiving nearly 20x more shares on Twitter was a surprise. We expect Twitter’s decision to suspend President Trump’s account was a factor.

In terms of the top themes, both left- and right-leaning publications were aligned with their coverage. Security, COVID-19, impeachment and the capital attack were the top four messages. After four years of intense political division, unity rounded out the top five key messages for right-learning publications.

We know what the media said before the inauguration, but what was the tone after the fact? The majority of coverage – nearly 60% -- highlighted the calls for unity. The biggest surprise was Amanda Gorman, the inaugural poet who stole the show with her powerful delivery of her poem “The Hill We Climb.” Of the dozen themes we tracked, Gorman received the third most coverage with nearly 10k mentions.

The messages were mainly positive and hopeful:

But there’s still a lot of worthy attention surrounding how divided the United States is as a country. Case in point: there were thousands of mentions about “civil war.” To end on a lighter note, inauguration fashion was another major trend. From coats and pearls to Senator Bernie Sander’s mittens, there were nearly 8k stories covering the best dressed attendees of the inauguration. 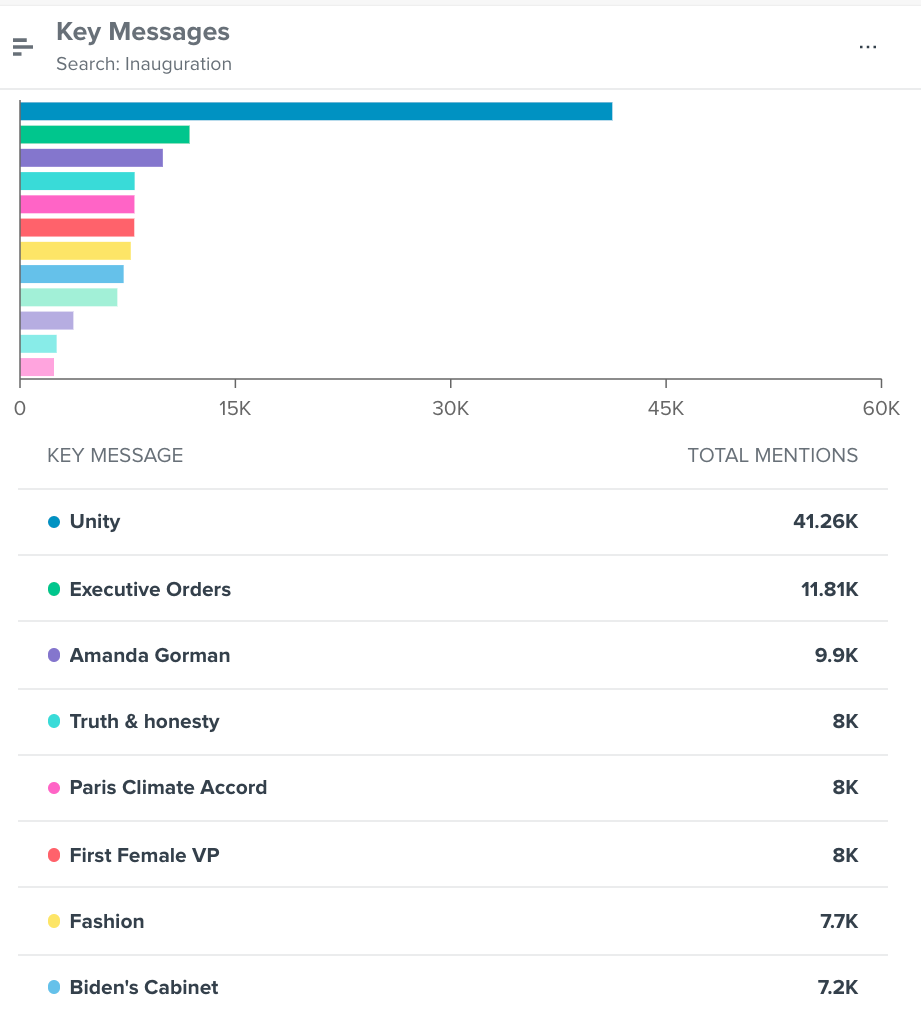 Want to follow your industry as carefully as we followed this election? Book a demo by clicking on the image below to learn more about our social intelligence and analysis offerings.