CHICAGO, Sept. 12, 2017 /PRNewswire/ -- To inform best practices within the communications and PR field, Cision (NYSE: CISN) today released a new study that examines the impact of social media on journalists. The 2017 Global Social Journalism study provides insights into how journalists use social media and examines the problems that it has created for the media industry, including fake news and an increasing focus on speed rather than analysis. The study is the 6th in a series of studies published by Cision that chart the changes in how journalists use social media. 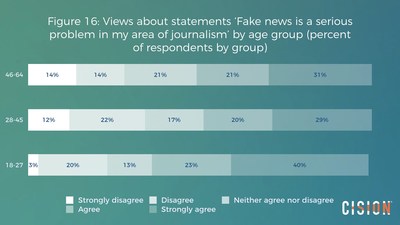 "The question is no longer whether social media is important to the journalist: this study confirms it's woven into their day-to-day work process," said Chris Lynch, Cision CMO. "What's more fascinating is that journalists are expressing concern about the societal impacts of social media on journalism. For example, it's clear that 'fake news' on social media sites and the discourse that follows might be undermining the overall value of their craft. Brand communicators have an opportunity to help journalists sift through the noise and get reliable information in the process of their reporting."

Despite social media being an increasingly central part of their daily job, journalists' views on the impact of social media on their profession, work and daily practices were mixed. Less than half of respondents agreed that social media has had a positive impact on journalism and of particular concern was the rise of fake news, with 51 percent of respondents identifying it as a serious problem. Interestingly, journalists' professional setting and demographic profile influenced concerns around fake news. News, politics and current affairs journalists were most concerned about fake news as were younger respondents when compared to their older colleagues. Other concerns included the impact of social media on traditional journalistic values (57 percent) and the role that social media has played in encouraging journalists to focus on speed rather than analysis (77 percent).

To develop the 2017 Global Social Journalism study, Cision and Canterbury Christ Church University conducted an online survey about the uses, behaviors, attitudes and perceptions of social media among journalists. Respondents were taken from Cision's media databases of more than 1.5 million influencers globally. Throughout the survey the term 'journalist' is used to include all media professionals, e.g. researchers, editors, bloggers etc., who took part.  A full report on the findings as well as takeaways for communications professionals can be viewed here.

About Cision
Cision Ltd. (NYSE: CISN) is a leading global provider of earned media software and services to public relations and marketing communications professionals. Cision's software allows users to identify key influencers, craft and distribute strategic content, and measure meaningful impact. Cision has over 3,000 employees with offices in 15 countries throughout the Americas, EMEA, and APAC. For more information about its award-winning products and services, including the Cision® Communications Cloud®, visit www.cision.com and follow Cision on Twitter @Cision.

About Canterbury Christ Church University
Canterbury Christ Church University is a modern, multi-campus University offering higher and professional education across key Kent and Medway locations: Canterbury, Broadstairs, Medway and Tunbridge Wells. It has a strong community of 17,000 students and 2,000 staff, studying and teaching across four faculties: Arts and Humanities, Education, Health and Wellbeing, and Social and Applied Sciences.

Christ Church was established in 1962 and is a Church of England Foundation University, welcoming all faiths and none. Today, the University continues to shape courses and research around critical social issues, the latest industry developments and public service need. Nearly 90 percent of its research submitted to the 2014 Research Excellence Framework (REF) was assessed as world-leading, internationally excellent or internationally recognized, and 95 percent of our UK undergraduates and 98 percent of our postgraduates were in employment or further study within six months of completing their studies, with nine out of 10 of our employed graduates in graduate level jobs three-and-a-half years after finishing their studies – higher than the national average. Visit: http://www.canterbury.ac.uk