Who Won the Vice Presidential Debate and How Did the Media Cover It? 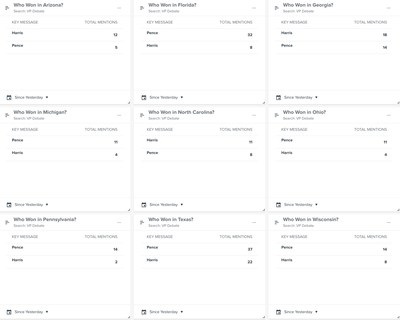 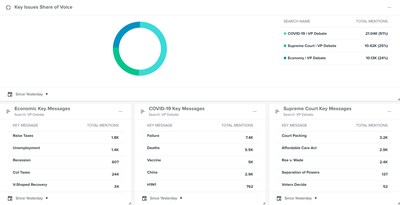 "Cision's State of the Election series was developed to provide people with a nonpartisan view of how the media covers the 2020 presidential election," said Seth Gilpin, Product Marketing Manager at Cision. "This week's analysis proves the power that local media has, particularly during an election, and how COVID-19 continues to dominate media coverage."

Local media coverage:
Cision's analysis looks at how local media in nine swing states judged the debate based on earned media mentions. The findings were:

Overall, 62% of local media publications in swing states declared Pence the winner. But interestingly, based on the 2016 electoral map – if Biden/Harris flipped Arizona, Georgia, and North Carolina – and all other states Trump and Clinton states remained unchanged – Biden would win the presidential race with 274 electoral votes.

When looking at the national media as a whole – of the coverage captured, 54% of publications declared Pence the winner, 40% said Harris won, and 6% did not designate a victor.

Days after President Trump's COVID-19 hospitalization and as the United States experiences yet another spike in cases – COVID-19 received the majority of debate coverage – with 51% of the share of voice.

The Supreme Court and the economy were nearly equal – with 25% and 24% of the media coverage. Healthcare received the least mentions with 13%.

And what about that pesky fly?
The fly that landed on Pence's head during the debate received significant media coverage: more than healthcare, climate change, racial inequality, law and order, foreign policy, and election integrity. Before the debate had even ended, "The Fly" was trending across on Twitter, generating more than 400,000 tweets.