A family business that’s been in operation since the late 1800s, William Grant & Sons is well known as the distiller of Glenfiddich and as such the first company in the world to market a true single malt whisky. With offices all over the world, its attention to quality continues to pay off. In 2017, for example, The Spirits Challenge Awards named William Grant & Sons ‘Scotch Whisky Producer of the Year” and “Master Distiller of the Year.”

Whisky connoisseurs already know the pleasure of enjoying a dram from William Grant & Sons, but what about being able to enjoy all the whisky you want while traveling the world -- and getting paid for it? That was the thinking behind a campaign Grant’s Whisky embarked upon to find its next global brand ambassador -- and technology from Cision was a key ingredient in its success.

William Grant & Sons wanted to celebrate the heritage of its original brand, Grant’s Whisky, and reach the next generation of whisky drinkers. So it launched a quest to find a global brand ambassador by creating the Greatest Job Interview in the World – a trip by the final three candidates to spend 10 days in three different countries armed with a suitcase of Grant’s Whisky. The trip tested the candidates’ ability to embody the brand’s motto – Stand Together – celebrating collective achievement wherever they went. If the interview was this good – imagine what the job’s like!

The lucky candidate who landed the job would then retrace the steps of company owner Charles Grant Gordon who took his whisky to the world on an epic voyage back in 1909. In 2018, the new global brand ambassador will visit no fewer than 24 countries taking part in various activations. 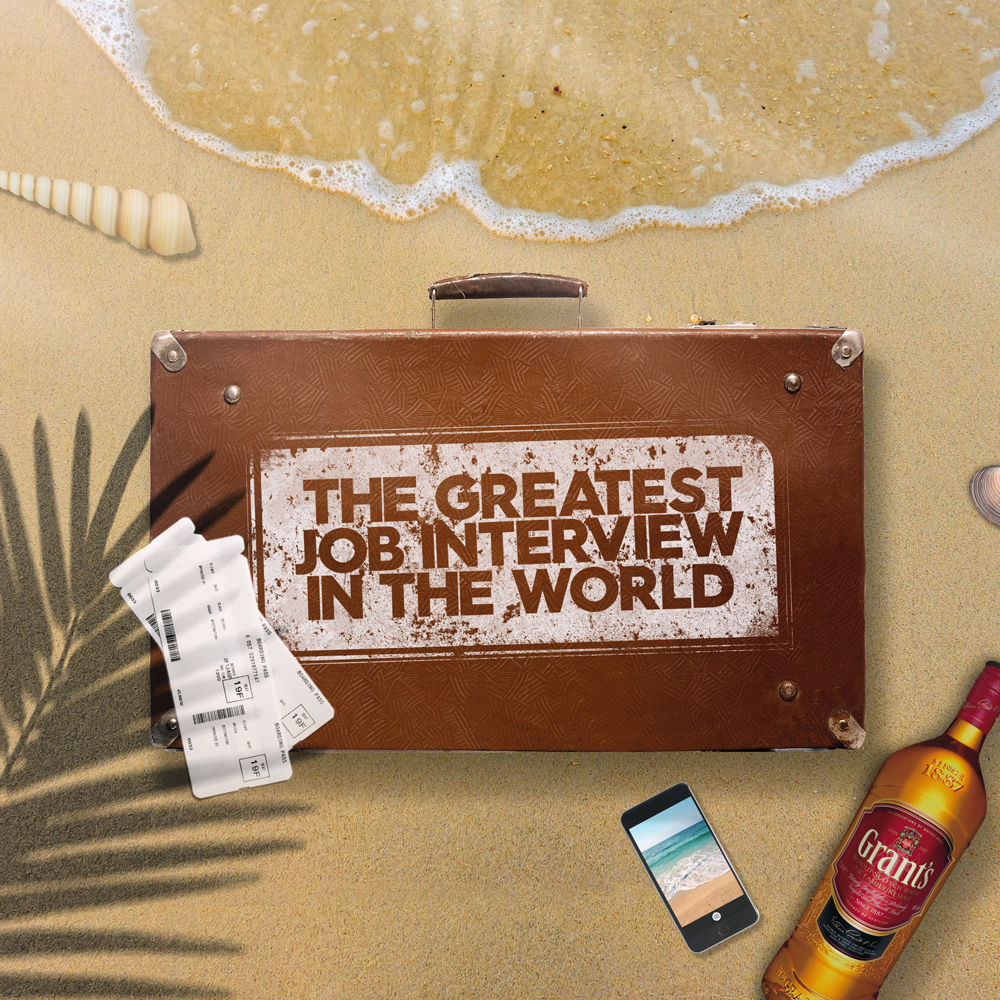 As a starting point, Grant’s asked consumers to create a drink containing three ingredients that would be perfect for the friends they’ve not yet met. They could share the drink on Instagram using #GrantsInterview or apply via the Grant’s website. The field was narrowed down to 20 who were put through their paces at a special event staged at Grant’s Whisky’s spiritual home, the original family distillery in Dufftown, Scotland.

“The blended whisky category has struggled in recent years to out-shine the single malt sector which is seen as more prestige. But blends are making a comeback so we wanted to present the Grant’s brand in a new and exciting light,” explains Steve Richards, from the Global Marketing team in Richmond, London. “The key proposition of ‘the Greatest Interview’ struck a chord with a younger audience. The fact that a previous distillery owner had make a similar trip 110 years ago made the campaign relevant to the brand.”

Getting the right level of participation from the public, however, meant the campaign needed to attract considerable media attention -- not just in the firm’s native Scotland, but around the world.

William Grant & Sons worked with Cision Distribution by PR Newswire to create a multi-channel news release (MNR) that brought together key assets around the campaign. This included a detailed explanation of what the company called “The Greatest Job Interview In The World,” as well as a video overview, a variety of image assets and more, all clearly aligned with the company’s branding. Perhaps most importantly for such a global firm, the same MNR was available in Spanish, German, Japanese, Chinese, Portuguese and Korean, among other languages. 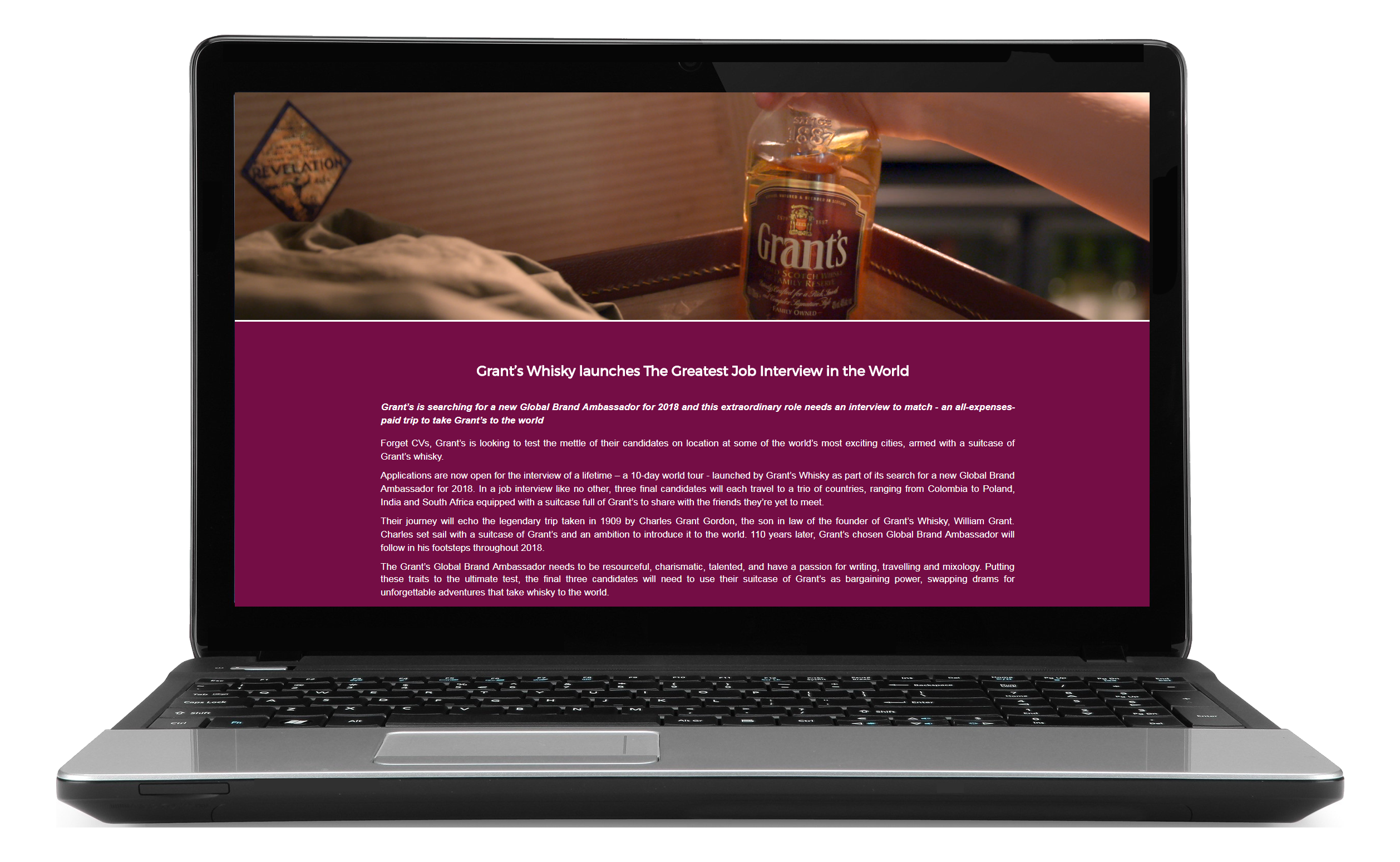 The Grant’s Whisky search for a global drinks ambassador was a story that deeply resonated with the interests of many publications. This is a sample of what that interest has translated into for the business:

Huge Reach To Earned Media And Their Audiences:  Little more than a month after the campaign was launched, the release was picked up by nearly 540 outlets, meaning a total potential audience of nearly 170,000,000 people.

“It was fantastic,” Richards says. “We knew we had an exciting headline but I was really impressed with the pick-up and snowball effect thereafter. And the fact we received almost 5,000 job applications from 100 countries is a testament to the campaign’s global reach.

Deep Engagement: In addition to all the stories that were written about “The World’s Greatest Job Interview,” media owners made extensive use of the multimedia assets included in the release.

Integrated Storytelling Capabilities: Having a release that mixed text, images, and video provided a seamless vehicle for William Grant & Sons to get its story in front of the right influencers.

“It can be difficult for a blended whisky to break through the noise,” Richards explains. “Traditionally you’d have to match the marketing bucks of the big labels. Our way to cut through was to come up with a compelling proposition but also being able to package the release and the assets in a really user-friendly way and distribute it quickly and effectively.” 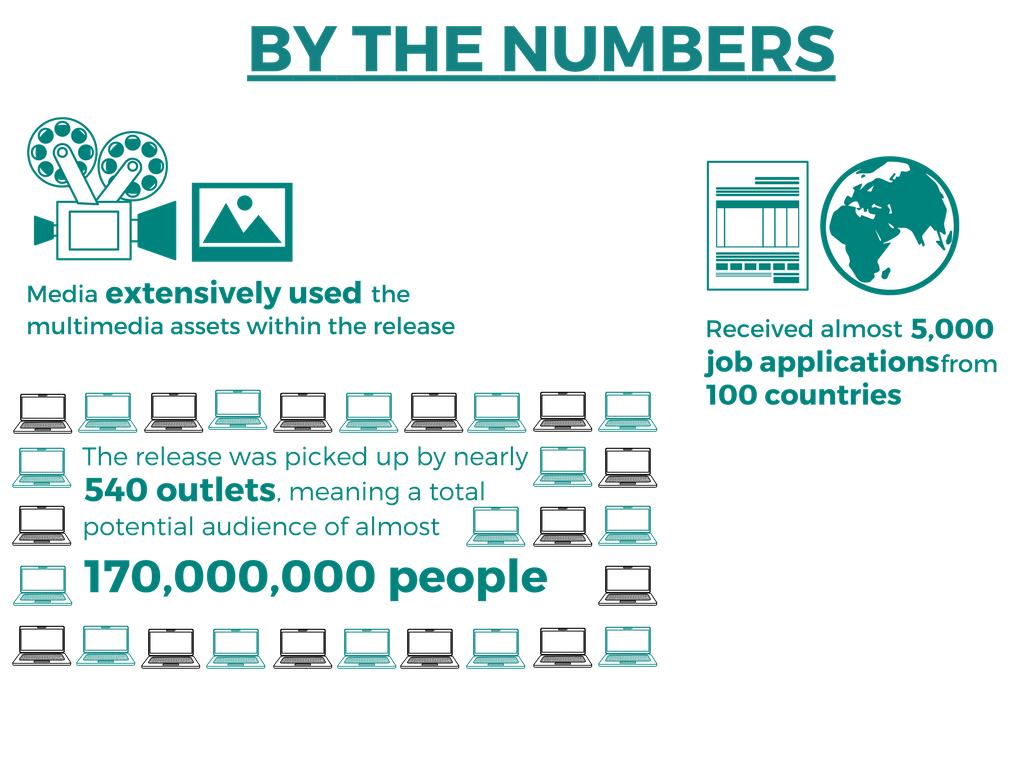 Besides Grant’s Whisky, William Grant & Sons owns nine core brands. According to Richards, all of the firm’s teams have been keeping an eye on the campaign’s success to date, and may be using similar tactics in the future.

“We’re often relying on local markets to help us promote things, but some have more resources than others,” he says. “This was seen as a way of getting almost guaranteed local reach, and it worked.”