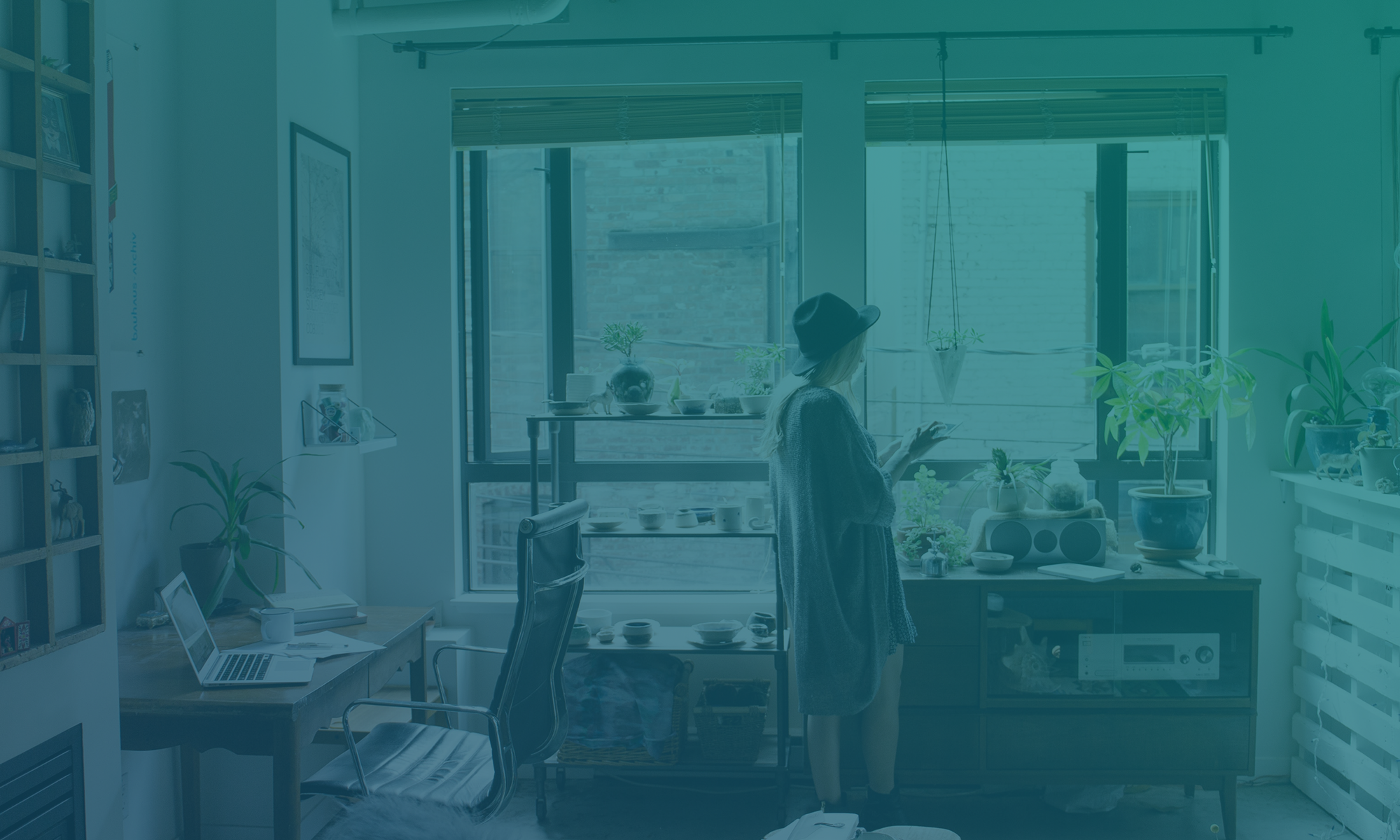 Gumtree is the top-ranked classified advertising site in the UK with sister platforms in other countries such as Australia and South Africa. Owned by eBay since 2005, and a leading player within the eBay Classifieds Group, Gumtree reports 14 to 19 million unique visitors a month and is the ‘go-to place for everything’ from iPhones to cars, jobs to accommodation. 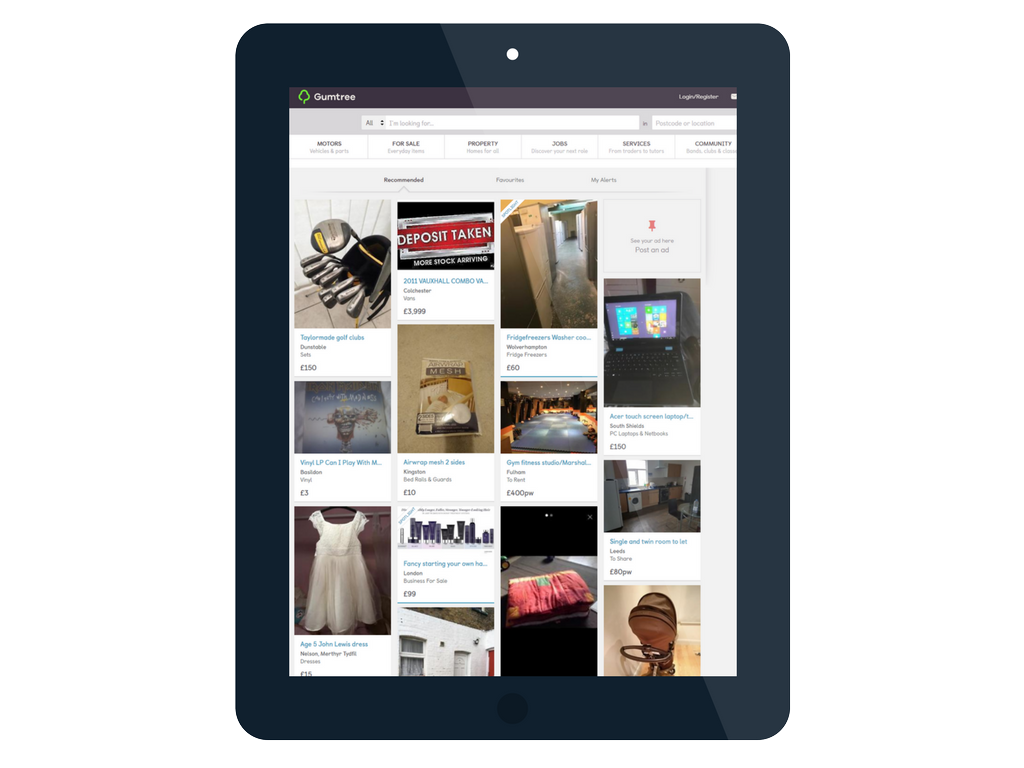 Despite its success, Gumtree acknowledges gaps in overall understanding of the brand. “It isn’t always clear who we are or what we do, because we do so much for so many different audiences,” said Fergus Campbell, Head of Communications at Gumtree. In addition, from a purely business standpoint, “We need to continue to grow usage across our different services and keep growing our user base in the UK.” To address these challenges, Gumtree identified the following communications objectives:

Gumtree and its media relations, public affairs, and social agencies, partnered with Cision Insights to develop a communications measurement framework that aligned to its communications objectives. 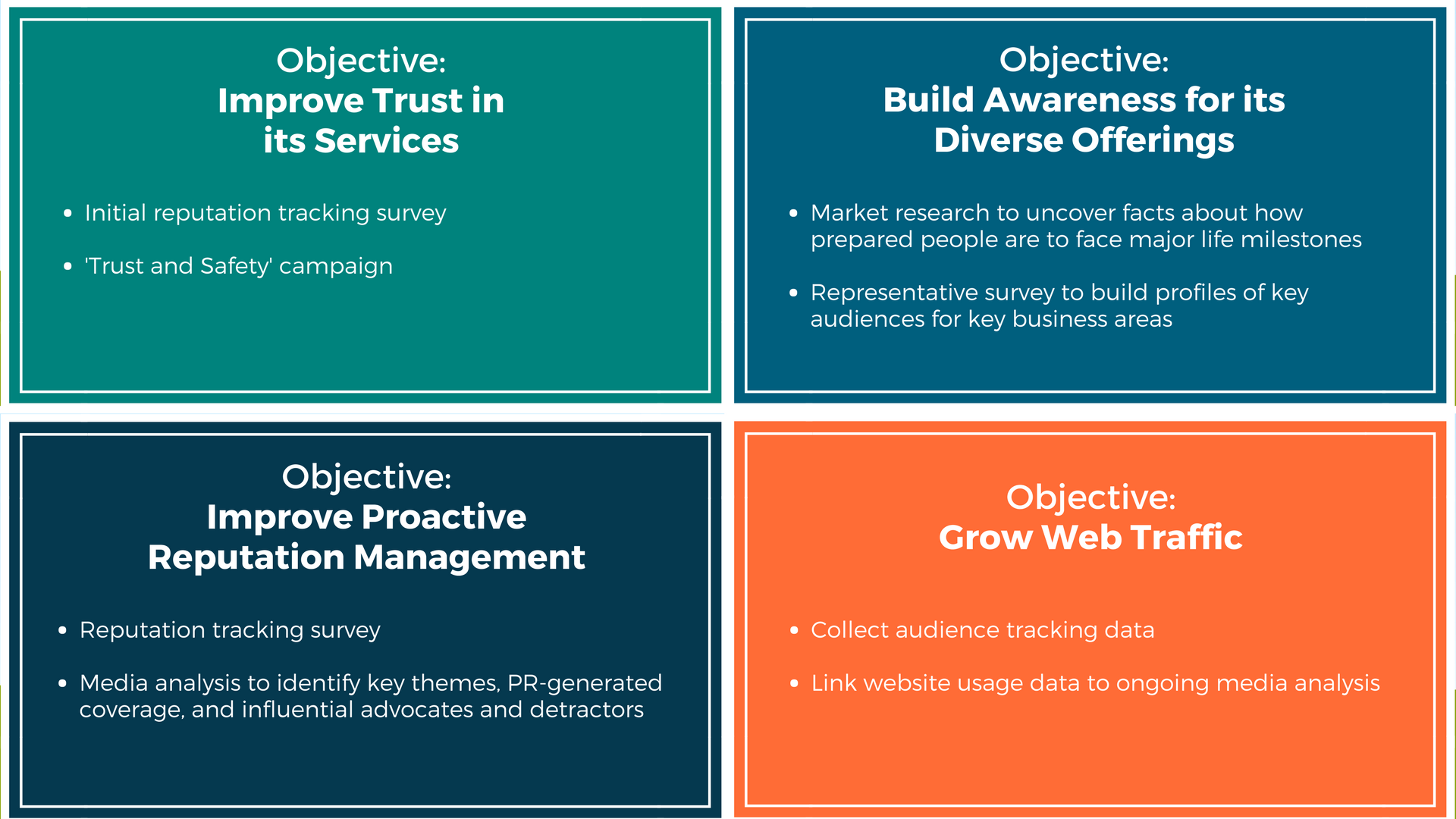 “I needed to be able to demonstrate value to senior leaders, especially since we’re now investing in communications and PR in a way that Gumtree has never done before,” said Campbell. “Measurement provides that substantial proof and shows the true RoI of marketing and PR.”

Improve Trust in its Services

Gumtree worked with Cision to build an ongoing reputation tracking study, targeting its key consumer and business-to-business audiences. The first iteration showed that the top three qualities these audiences looked for in an online retailer were value, ease-of-use and trustworthiness. The research showed that Gumtree performed well against value and ease-of-use but performed less well on trust, confirming that this communications objective required immediate proactive communications strategies.

Media analysis conducted alongside the tracking study showed that there was a relatively large proportion of negative coverage, with a number of stories that discussed fraudulent items or poor quality items. This analysis was then used to inform a series of actions aimed at improving sentiment and building trust, including:

Building Knowledge and Awareness for its Diverse Offerings

Gumtree addressed the need to build awareness and understand with a set of PR campaigns: the Economy of Relationships, the Economy of Parenthood and the Economy of Adulthood. These linked campaigns focused on how Gumtree helps people during key life stages.

Once again, Gumtree began with market research to help find meaningful story angles, and to gain deeper awareness of their brand’s impact within key audience segments.

They began with a study of target audiences (such as millennials and parents) to discover what they considered to be ‘key life stages’, and how prepared they are for these events. This, combined with additional research, uncovered some interesting tidbits, including: Gumtree used this information to create content, including media pitches and press releases quoting Gumtree’s spokespeople relaying the message that their site is a great place to go at times when you need your money to stretch a little further. 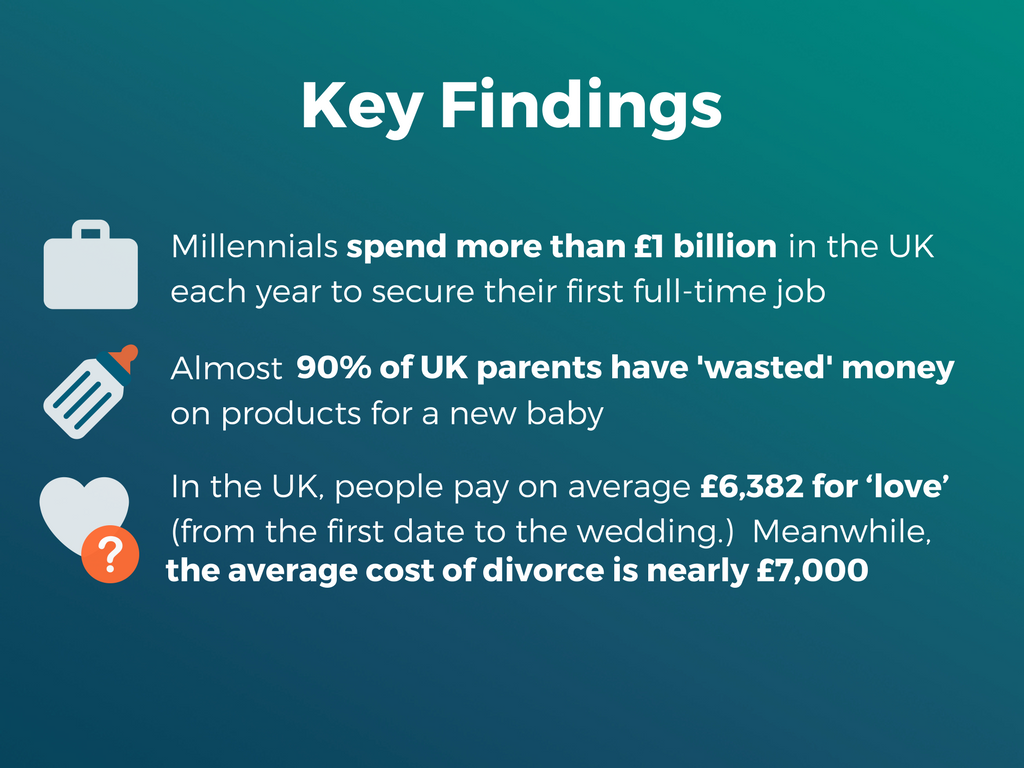 This effort was coupled with a deep look at the media consumption of these audiences. Cision used UKPulse, a representative survey of 10,000 UK consumers, to gather information that was used to build targeted media lists, and evaluate Gumtree’s previous success in sharing their messages through coverage from relevant media outlets. The data was also used during and after the campaigns to understand how successfully these audiences were reached.

Media analysis was used to manage reputation throughout the year. It focused on:

For all activity, it was important to understand the ongoing impact on consumer awareness levels and how favorably or unfavorably they viewed the brand. “This really helped us see if our PR and communications messaging was resonating with our key audiences,” said Campbell.

Website analytics were used to show their effect on site usage. For example, Gumtree noticed an annual ‘Christmas dip’ in traffic as people move away from classifieds sites to retail outlets to buy presents.

In addition to the audience-tracking data, Gumtree was able to link their website usage data to media analysis to understand how media coverage was driving usage on the site, particularly around key points in the year.

To keep all communications objectives on target, Gumtree worked with market research company Opinion Matters to develop a quarterly tracking survey based on 1,000 consumer and 500 B2B respondents for each iteration.

Questions were split up into five areas:

After 12 months with this measurement framework in place, Gumtree saw significant gains in awareness, reputation and website traffic.

The reputation tracking survey highlighted that ‘trust’ and ‘safety’ were a concern while media analysis showed that negative coverage relating to fraudulent items increased in the first few months of last year.

This led the team to focus on tackling the issue through its ‘Trust and Safety’ campaign. This raised awareness that Gumtree was making progress in making the site safer to use and educating users on how to protect themselves. “This research gave us confidence, as we knew the status quo of our audience and could plan communications campaigns to improve those perceptions,” said Campbell.

Media analysis showed that the ‘Trust and Safety’ campaign drove coverage during the campaign period, with a peak in the ‘safe place to trade’ and ‘security’ messages, which were delivered in 19% and 37% of articles respectively.

Using analysis to manage proactive campaigns, identify and develop relationships with key journalists and react to emerging stories, the team was able to reduce negative coverage. By year-end, the proportion of coverage mentioning fraudulent items had fallen by 35%. “Knowing the volume of coverage is important, but the analysis has also given us the ability to gauge sentiment, which is key to delivering campaign results to our senior leadership,” said Campbell. “As a result of these initiatives, over time we have started to build relationships with our key stakeholders, improve our reputation and show that we can positively affect business outcomes.”

Awareness for its Diverse Offerings

The tracking survey was then able to show significant changes in awareness of the Gumtree community and the different services between January and October:

“These research methods not only help us guide our projects but also help us measure the role/impact of our third-party PR services,” said Campbell. 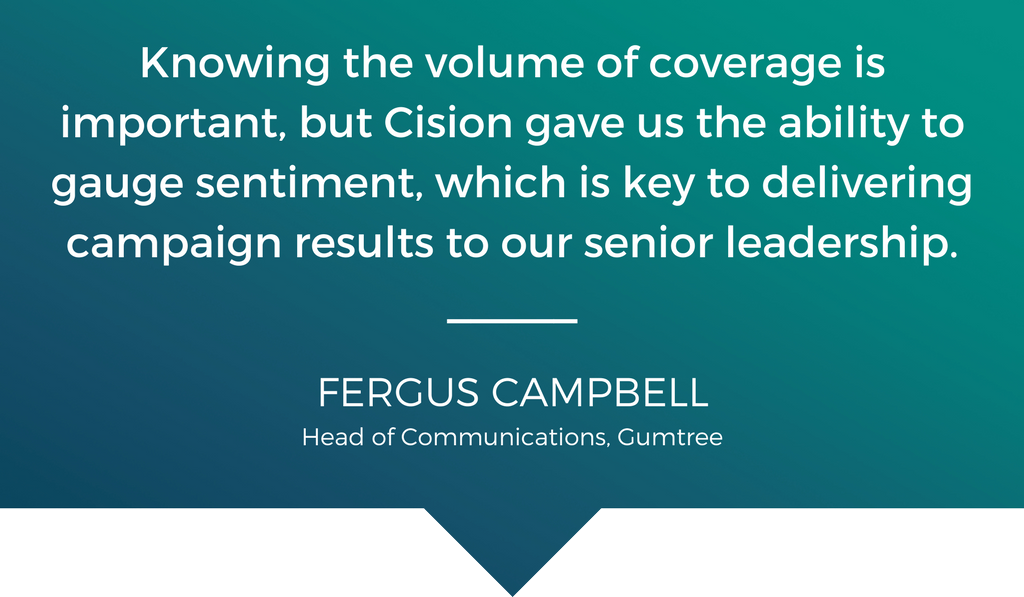 The focus on proactive campaign activity had significant effects on quantity and quality of the resulting media coverage:

The focus on target media meant that Gumtree was able to drive a high exposure amongst its target audiences. “In a data-driven organization like Gumtree, the use of measurement has become essential to demonstrate the effectiveness of our communications activity and how we support the business,” said Campbell.

Reputation tracking research highlighted the effect of this activity on Gumtree’s target audiences:

Gumtree saw a 10% year-on-year increase in direct visits to the ‘For Sale’ area of the site.

Campbell and his team hope to expand their measurement framework to incorporate business impacts. “We want to answer questions like: how much can we, through PR, help to reduce the number of customer services issues? And can we drive site traffic in specific categories, and at specific times?”

While this year’s campaign involved a lot of fact-finding and framework building, Campbell is optimistic about Gumtree’s PR efforts this coming year. “We still have much to do, but using the insight from we have achieved so far to inform our activity throughout 2018 and into 2019, should ensure that we continue to learn and improve what we do.”