Slimming World has been providing lifestyle weight-management programs since 1969. The company supports 950,000 members across the U.K. and Republic of Ireland through weekly group sessions and online and has recently launched online in the U.S.

Slimming World also invests in a comprehensive research program to develop its support for long-term weight management. The group support provided by Slimming World is recognized as effective by the National Institute for Health and Clinical Excellence (NICE) and the NHS.

To increase awareness of competitive advantages and overall brand perception

Slimming World’s overarching goal is to support those who want to lose weight while also improving their self-esteem and confidence. To achieve this, Slimming World’s PR team looks for ways to position the company as a leading authority in weight management.

Facing a wide range of competition from weight management organizations, Slimming World places importance on increasing audience awareness of its unique approach to weight loss and demonstrating evidence of its effectiveness.

“January is crucial for us. It’s a time when many people pledge to lose weight and, in a highly competitive market, breaking through the noise to make Slimming World the weight-loss method of choice is both a challenge and an opportunity,” said Jenny Caven, head of external affairs at Slimming World.

Caven and her team planned a "Dream Weight" campaign, which aimed to demonstrate the company’s effectiveness at helping people achieve their dream weight. The PR team used a study from its in-house research team to help bolster the campaign.

Published in the Journal of Human Nutrition and Dietetics, the study showed that people who set more ambitious weight-loss targets lose more weight than those who set more modest targets. The findings of this research were incorporated into its campaign, targeting national, regional and local media.

The campaign was further supported with weight-loss success stories and social media activity, and was followed by ongoing PR and consumer-focused campaigns including the announcement of Slimming World’s ‘Mr Sleek’ and ‘Miss Slinky’ 2017.

The Dream Weight campaign had the following PR objectives:

With the campaign design ready to go, Slimming World’s PR team needed a measurement framework in place to help track metrics before, during and after the campaign. “We needed to demonstrate the ROI of our efforts and prove that what we were doing was strategic and would meet our business goals," Caven said.

A three-tiered measurement and survey strategy

Slimming World worked with Cision Intelligence to integrate a variety of measurement and research techniques to evaluate the efficacy of the entire campaign. Cision’s research and measurement strategy incorporated three elements: 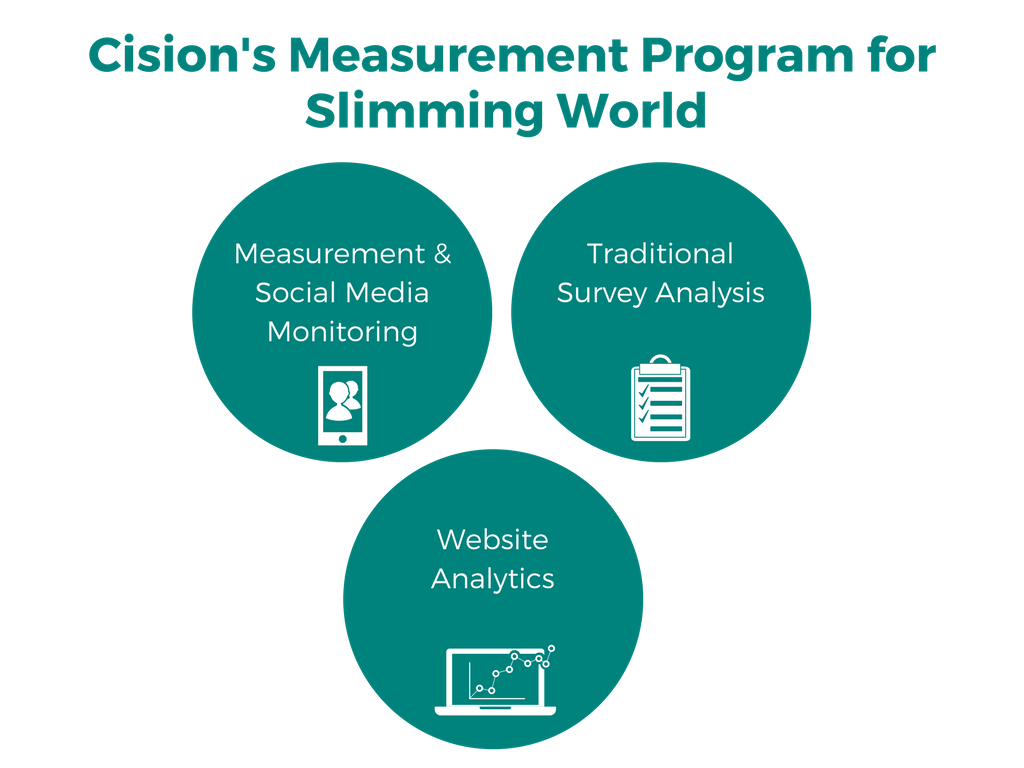 Cision’s team of analysts coded print, online and broadcast coverage for sentiment and relevant metrics, including the presence of campaigns, messages, spokespeople and impact measures. Coverage was measured for the six weeks prior and six weeks after Slimming World’s campaign launch.

Cision worked with market research company, Opinion Matters, to survey a representative sample of 10,000 people making up target audiences for the campaign. The data was used to identify a key target media list for these audiences and was used to gauge the resulting reach to each audience.

To better understand the campaign's impact on Slimming World's audience, Cision ran additional brand research via Gorkana Surveys, which asked specific questions relating to Slimming World, its reputation, and people’s propensity to use Slimming World for weight loss instead of other methods.

The first one ran just ahead of a surge in proactive PR activity for the Christmas and January period. This was compared with results from a second survey, which ran six weeks later. Analysis explored changes in perception over time.

Five questions were asked, each with a grading of possible answers on a sliding scale:

Cision and Slimming World used web analytics to measure how the campaign and earned media activities impacted web traffic and sign-ups. Website analytics were used at both a macro level, to understand overall changes in activity, and a micro level, to understand specific online journeys for individuals as they read online content, visited the website and searched for their nearest Slimming World group – which is often the last step before participants join.

“By measuring changes in brand recognition and reputation, tracking website visits and sign-ups, and linking this to media analysis that shows reach, tone and quality, we could understand how our messaging was resonating, who we were influencing and the impact of our communications,” Caven explained. “Cision helped us demonstrate our success with tangible results and thorough qualitative analysis.”

Media coverage for Slimming World increase significantly in both volume and quantity during the campaign period. The company saw 365 percent more coverage in the six weeks following the “Dream Weight” campaign than the six weeks prior. “We were pleased to see that the majority of our earned media coverage delivered a key message and was positive in tone,” added Caven. 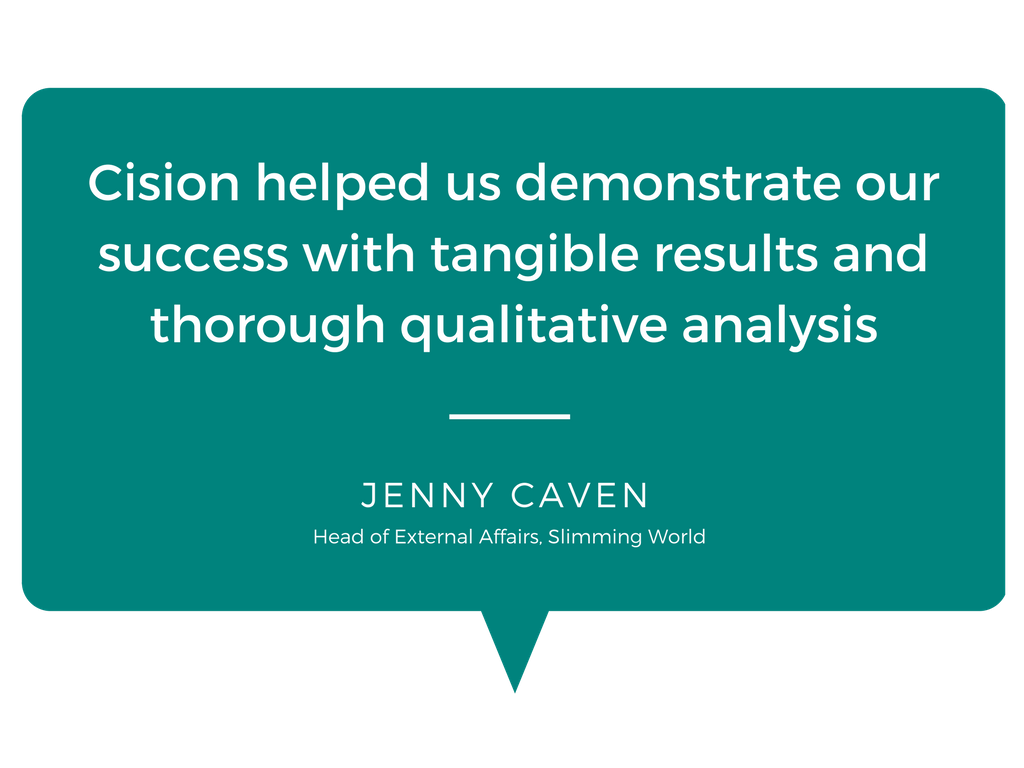 The campaign increased its audience reach by 25 percent, led by Slimming World’s appearance in targeted outlets such as the Daily Mail and The Daily Telegraph. The UKPulse data demonstrated that these were key media outlets for Slimming World to pitch, and also validated all media outputs. The follow-up “Miss Slinky 2017” campaign received international attention in U.S. outlets such as People.com, Inside Edition and Aol.com, which drove web traffic to the Slimming World U.S. site. "Using surveys helped us to pinpoint the media outlets that our target audience frequently read," Caven commented.

Familiarity with Slimming World’s products and services increased by eight percent, and 45 percent of respondents post-campaign said they would likely use Slimming World to lose weight. The biggest increase came from men, where positive perceptions increased by 13 percent.

Coverage related to all campaigns generated more than 11,000 web sessions and an average web conversion rate of more than three percent. Newspapers that ran menu plans and recipe extracts from Slimming World accompanied a free membership, which accounted for 50 percent of all new members who joined Slimming World during the campaign month. “We also say membership increased by more than 17 percent over the course of the campaign,” said Caven.

Slimming World’s work with Cision recently won gold at the 2017 AMEC awards, which recognize excellence in measurement, for “Best use of a measurement framework.” 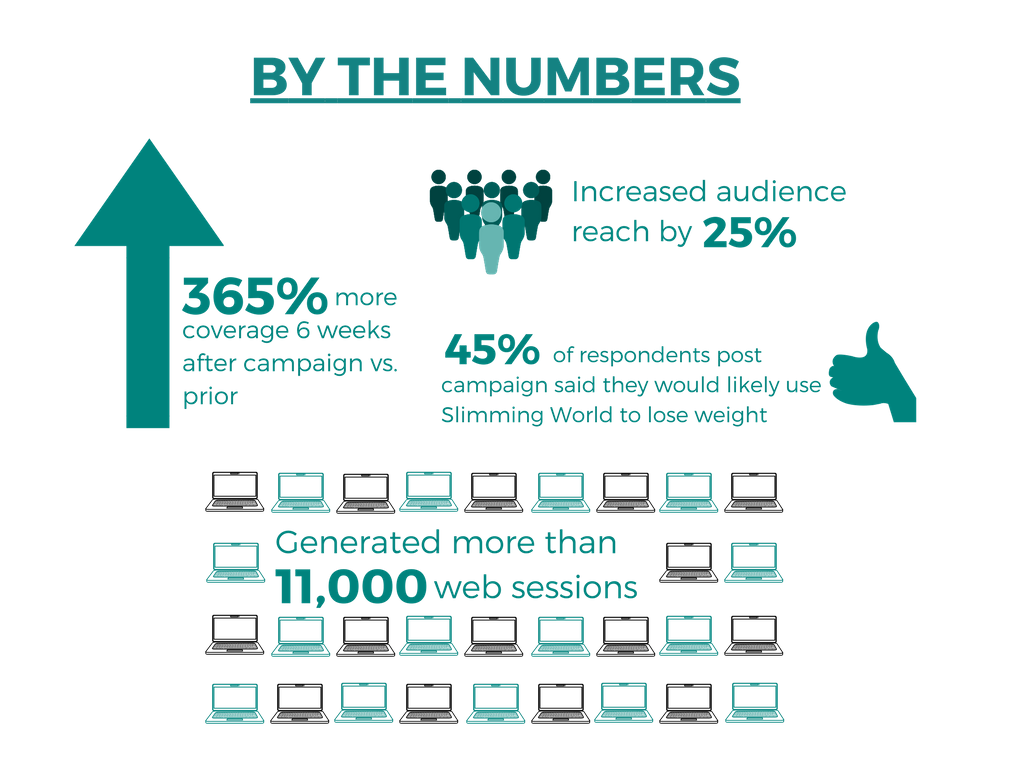 Slimming World will apply its learnings from the “Dream Weight” campaign to future PR strategies. “As we continue to work to build our presence and raise awareness of our brand beyond the UK and Ireland, demonstrating how PR can drive results will ensure that earned media remains a key component of our paid, earned and shared strategy to enhance recognition, our reputation and business growth,” Caven concluded.