As Americans tuned in to the GOP Presidential debates, they also turned to social media channels to post reactions.  Buzz about the two rounds of debate peaked between 7 and 8 p.m. EST driven by recaps of the first debate highlights and build-up to the second debate with GOP presidential candidate frontrunners.

There was an uptick in buzz around 2 a.m. EST driven by links to footage from the debate or news articles recapping highlights and declaring debate “winners.”

Commentary included discussion of the CNN debate format itself.  Some were confused as to why candidates were divided unevenly: four candidates in the first debate and eleven in the second. This unbalanced division caused many to note that there were too many candidates on the stage in the second debate.

Commentary about the moderators also surfaced, including questions about why there were only three moderators when Jake Tapper did all of the speaking.

Others noted the lack of control of the moderators and their inability to reign in candidates for speaking over time, or inconsistency in the duration of time they permitted some candidates to speak versus others.

“This debate should be on Bravo. #GOP Debate” – Twitter

There was criticism by a few who believed that moderators interrupted the candidates when they began to speak to topics that were actually interesting.

“Bottom line … CNN went out of their way to word questions to bait candidates into attacking each other on a personal level rather than concentrating on the issues of the day. Leaving debates to progressive news media, even with a conservative token, is counterproductive. Hugh Hewitt and Dana Bash were almost irrelevant. CNN giving Trump almost 18 minutes versus Scott Walker’s 7 minutes was manifestly unfair. You cannot score if you cannot get screen time. My first conclusion is that having eleven people on stage is simply too much for a substantive discussion….”–onecitizenspeaking.com

“Just shout out, and you too, viewer, can interrupt the debate and make a speech. Jake Tapper doesn’t mind.” #CNNDebate –Twitter

“We have rules and timing? I must interrupt you to ask my stupid question. #CNNDebate #GOPDebate “–Twitter

Want to understand the social discussion surrounding your brand? Request a demo of Cision Social Edition! 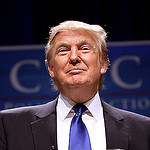 Donald Trump had the highest share of social discussion of the GOP presidential candidates, accounting for more than one-third of buzz. Conversation varied widely, ranging from support of the candidate, to criticism, to general disbelief that he had gained so much traction.

The #trump2016 and #donaldtrump hashtags surfaced highest in Twitter buzz. Prominent terms in discussion included the “Make America Great” campaign slogan, as well as Tom Brady references, given the football player’s recent endorsement of the candidate.

Tracked debate topics accounting for the highest share of buzz for Trump included immigration (30 percent) and policy for the Middle East (29 percent).

“I really can’t believe #DonaldTrump is being taken seriously as a candidate. I can’t” –Twitter

“Trump wants to make America great again by tearing the country apart & creating a racial divide like we saw in 60’s when US cities burned 🙁 -Twitter Things leading #GOP nominees shouldn’t be able to get away with: ‘Putin and I would be buddies.’ -#-Trump #OMGOP#PopcornPrimary #CNNDebate”-Twitter 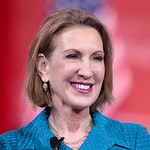 Carly Fiorina was ultimately considered the winner of the debate, demonstrating the strongest performance of the group. Terms surfacing highest in social discussion included words related to Donald Trump, as authors commended Fiorina for striking back on Trump’s comments earlier in the month about her appearance or referenced Trump’s attack on Fiorina’s performance as CEO of Hewlett Packard. Abortion was the most discussed topic within Fiorina social buzz (57 percent tracked topics). Planned Parenthood was one of the most prominent terms in discussion for the candidate, as some applauded her position on abortion, while others described her comments as a “rant.”

“WATCH THIS EPIC DEBATE ON PLANNED PARENTHOOD! Carly Fiorina,Ted Cruz & Chris Christie Wow be sure to watch the video until Carly Fiorina gets to talk. Amazing Speech!” –YouTube.com

“Fiorina: ‘Having met Putin, I wouldn’t talk to him at all.’ Well, that’s comforting given Ukraine, Syria…#GOPDebate #CNNDebate” –Twitter

“Did anyone else expect Kanye to run out and interrupt Carly Fiorina? #CNNDebate #GOPDebate” -Twitter 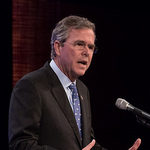 Terms surfacing high in discussion for Jeb Bush included hashtags #jebbush and #allforjeb, as well as names of other top GOP candidates, namely Donald Trump. Other top terms included references to his admission of smoking marijuana, with the #420 hashtag also surfacing prominently in conversation. Trump comments focused on Bush’s attack on Trump for allegedly trying to bring casino gambling to Florida, as well as banter about Bush and Trump being less qualified to speak to women’s rights than Fiorina. Policy in the Middle East accounted for the highest share of discussion among tracked topics for Bush (49 percent).

“Jeb Bush admitted smoking pot 40 yrs ago. Did he inhale?”-Twitter

“TRUMP CAUGHT: Yes, The Donald did donate money to Jeb Bush to get him to expand casino gambling… “-Twitter

“’Forty years ago I smoked marijuana. I admit it. My mom’s not happy that I just did.’ Okay, that was endearing.”#GOPDebate -Twitter

Want to see how politicians shaped the social buzz around vaccines? Get our free white paper today!

Caitlin Jamali joined Cision via the acquisition of VisibleTechnologies in September 2014. As a Senior Research Analyst, Caitlin helps some of the world's leading brands derive meaningful insights from social and traditional media, with a focus on brand health, consumer insights and media effectiveness. Her work spans various industries including Financial Services, Pharmaceuticals and Media. Caitlin speaks Spanish and lives in the Boston area with her husband and two children.