If you think that people talk a lot about medical marijuana, you would not be wrong. Virtually every aspect of the topic, from Access to Zoning, is discussed online. But not by everyone, nor everywhere.

Since 2013, the majority of Americans now support legalizing marijuana. To date, 23 states and the District of Columbia have legalized its use, and a number of marijuana-related ballot measures will be before voters in 2015 and 2016.

Yet, marijuana is still classified by the U.S. Drug Enforcement Agency as a Schedule I narcotic — an illegal drug with “no currently accepted medical use and a high potential for abuse.” Research and testing in the U.S. has, therefore, been very limited. Doctors violate Federal law if they prescribe it. Transporting it across state lines can land you in jail.

Want all the key findings on medical marijuana? Get the full report today!

Not all pharma companies have the same agenda when it comes to medical marijuana. Yet, no matter which side a company is on — supporting or opposing legalization — it will be helpful to examine not just what is being said by whom, but the where and when of online conversations.

In this post, I want to talk about how pharma companies can use these findings (plus other insights in the full report) to improve the receptivity of their efforts, simply by being more aware of geographic differences and timing.

Let’s look at this in more detail, with examples from the report.

Perhaps because I was born in South Africa, I like to start with a global view. As Americans — myself included — we often see ourselves as the center of everything, so looking beyond our borders provides a bit of perspective.

The chart below (Table 1) compares the weekly conversation volume in the U.S. (the top line) to conversations in other countries where the use of MMJ is legal. So, yes, we do talk about MMJ more in America than in countries where it is readily available. 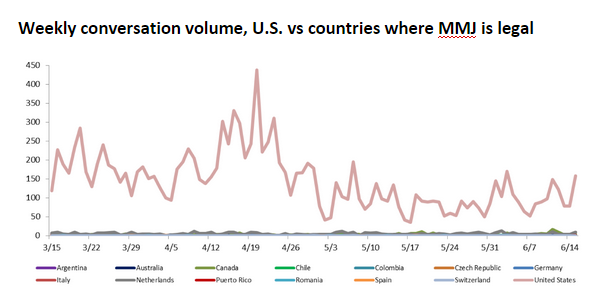 Within the U.S., there is a significant difference in the volume of social conversations when looked at by region. We can see that the overall level of conversation about MMJ is lowest in the Northeast, where most states have already legalized MMJ. At the same time, the highest levels of conversation are out West, where marijuana is approved for recreational use (Colorado, Washington, Oregon, Alaska) and where residents of California, Arizona, New Mexico and Nevada are working to put marijuana-related ballot measures before the voters.

3. Note that Timing is Everything

In addition to the two “where” factors described above, “when” data can be especially helpful. We looked at the media coverage of MMJ in large daily newspapers over the course of four years. Using this extended time scale, we can see a significant drop-off in media coverage following legalization of MMJ (Arizona) and the ramping up of media leading to ballot measures (Florida, Ohio). Legislative wrangling (Philadelphia), and program implementation (Illinois) also boosted the volume of media coverage, while New York’s Newsday remained at a consistent, low level. 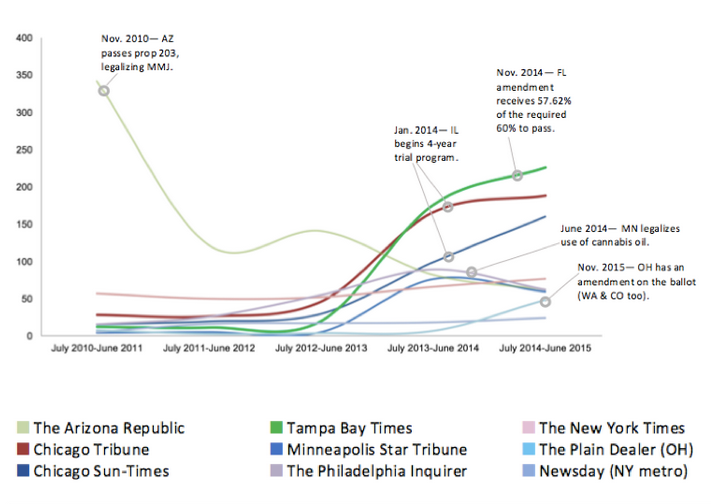 Pharma companies can turn these insights into actions, starting with their own internal conversations. 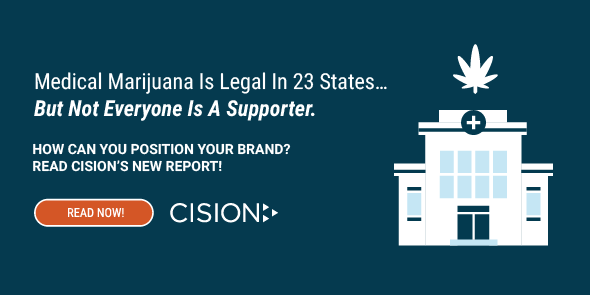 Mathida Joubert is a Vice President in the Global Insights group at Cision. An analyst at heart, she loves following data bread crumbs to ultimately tell stories. She has consulted numerous automobile manufacturers, biotech and pharma companies, major foundations and other not-for-profit organizations to help them measure the success of their communication activities. Always planning the next place to visit, she’s visited over 30 States in the U.S. and extensively abroad, but her favorite remains her native country, South Africa.