Unless something changes, Donald Trump will win the GOP nomination. How do we know? We’ve been listening to America.

Communicators beware. When your competition embeds its message into your audience it can take tremendous effort to unstick that perception, something that Republican nominees for president are surely noting in regards to billionaire, reality TV star Donald Trump.

Unless another contender can deploy a convincingly sticky message with Republican voters, the momentum that Trump is building will propel him to victory in the GOP primaries.

We filtered out the mainstream media and its personalities to drill down further into exactly what potential voters are saying during the candidate debates. This is the second Republican debate that we have monitored, and the results trend in Trump’s favor.

To date, Donald Trump is controlling the message of the campaign and his support is growing. During the November 10 GOP debate, Trump commanded 20 percent of the share of voice and that shrunk to 16 percent by the following morning. Candidates were able to drown out Trump’s commenters with the weight of their supporters.

After last night, even with two hours of live national air time, Republican candidates barely made a dent. The only candidate left with double digit share of voice was Texas Senator Ted Cruz.

Here are some lessons from the GOP battle that PR pros can infuse into their communication strategies. 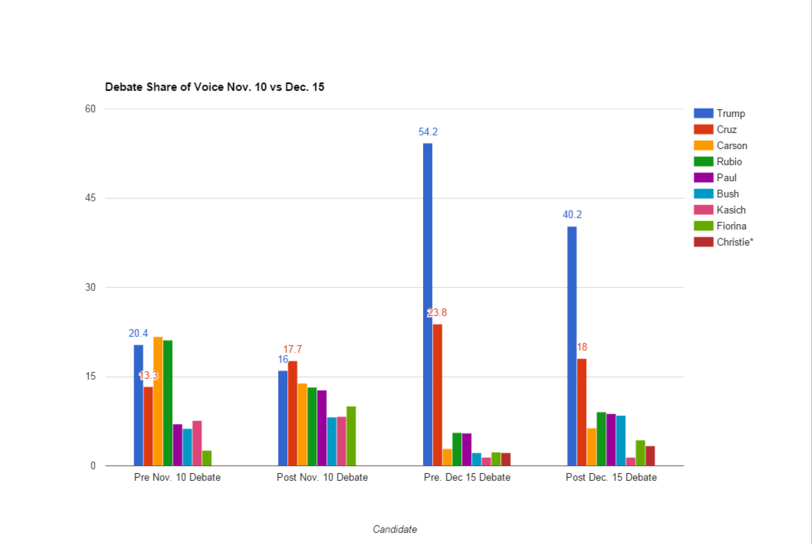 Nominations are voted on by a fraction of a fraction of the electorate. When a candidate commands half of that group, they are the front runner. And growing support in social media on the topics that a candidate is strongest on indicates momentum.

Researchers have found that social mention share of voice correlates very closely with vote counts. In fact, a study by researchers at Indiana University found that in 2010 social mentions predicted the winner of 404 out of 425 competitive races in the U.S. House elections.

Brands can use social data similarly. By listening to your consumers, or the social landscape at large, issues management teams can project what will affect their brand and respond in real time.

Without metrics a few wayward voices can sound like a majority and lead to bad decisions. 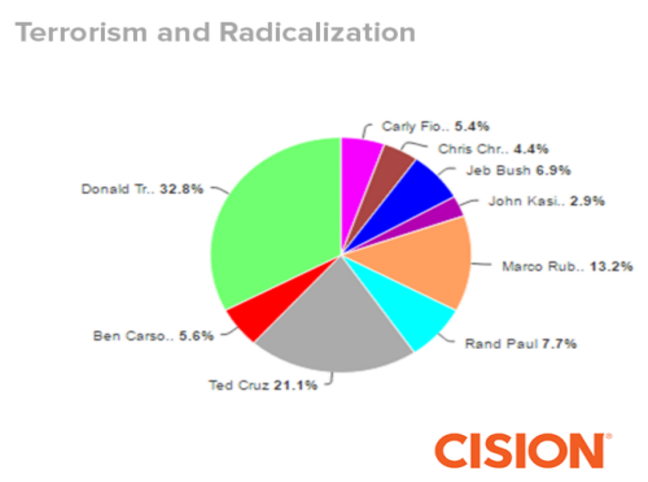 Not every online voice carries equal weight, though. Just as communicators aim to get their brands in the largest, most targeted publication, they need to go beyond volume to understand who is behind the social posts.

For example, being the first debate since the Paris and San Bernardino attacks, the evening veered from discussions of military tactics and immigration reform to battling terrorism online.

Vox.com tech and finance journalist Mathew Yglesias made fun of Trump’s ideas on fighting a digital war on terror by shutting down the Islamic State’s access to the Internet. 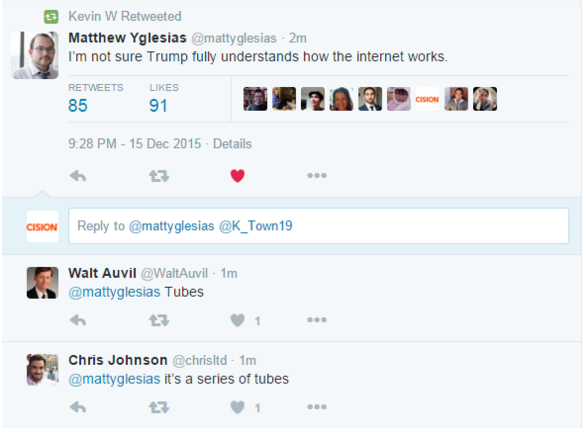 Why was Yglesias’ comment noteworthy? Because of his influence in the space, at least partially indicated by the 85 retweets and 91 likes it received.

As people view social media personalities as trusted figures, brands need to monitor their industry’s tastemakers for opportunities for collaboration or damage control.

Just as Trump had detractors, he also had evangelists. Some commenters rebutted assessments of Trump’s Internet-savvy by pointing to the fact that www.jebbush.com redirects to Trump’s website.

This brand vandalism could happen to your brand. Whether it is a parody account or a new social platform, social listening can help you protect your brand by informing you of malevolent social messages.

Protect yourself by staking ground on new platforms and monitoring existing ones.

What does the data show?

Bombasity and ideology aside, if social media engagement displays intensity of support, then Donald Trump is leading the race and will win it unless something changes.