A Cision Report: The State of the 2020 Election

A Media Coverage Analysis of the Democratic and Republican National Conventions

With the Democratic and Republican National Conventions in the books, the countdown to November 3rd has begun. The election is guaranteed to dominate the news cycle – in fact, it already is. Thousands of stories are already published every day, which reach millions of voters across traditional, digital, and social media channels.

For the next 10 weeks, Cision will track and analyze the U.S. presidential election coverage and publish our findings in a new blog series, The State of the Election. You can expect nonpartisan, data-first insights to understand how the public is consuming and engaging with election coverage before, during and after the campaign all right here in this blog post.

2020 is a year of firsts. For the first time in modern history, U.S. party conventions were unable to be held in person. There was no applause, cheers, or laughs; speeches were scripted for a virtual audience. But the symbolic nature did not change. The conventions jump-start the campaigns and serve as an opportunity to introduce each party’s platform, policies, and objectives for the upcoming election. Each night of the 2020 Democratic and Republican National Conventions attracted approximately 20 million viewers. The eight days of combined programming sparked thousands of news articles, reaching millions more.

Obviously, media publications have political affinities. To better illustrate how left and right-leaning publications covered the conventions, we segmented the mentions based on apparent political biases. 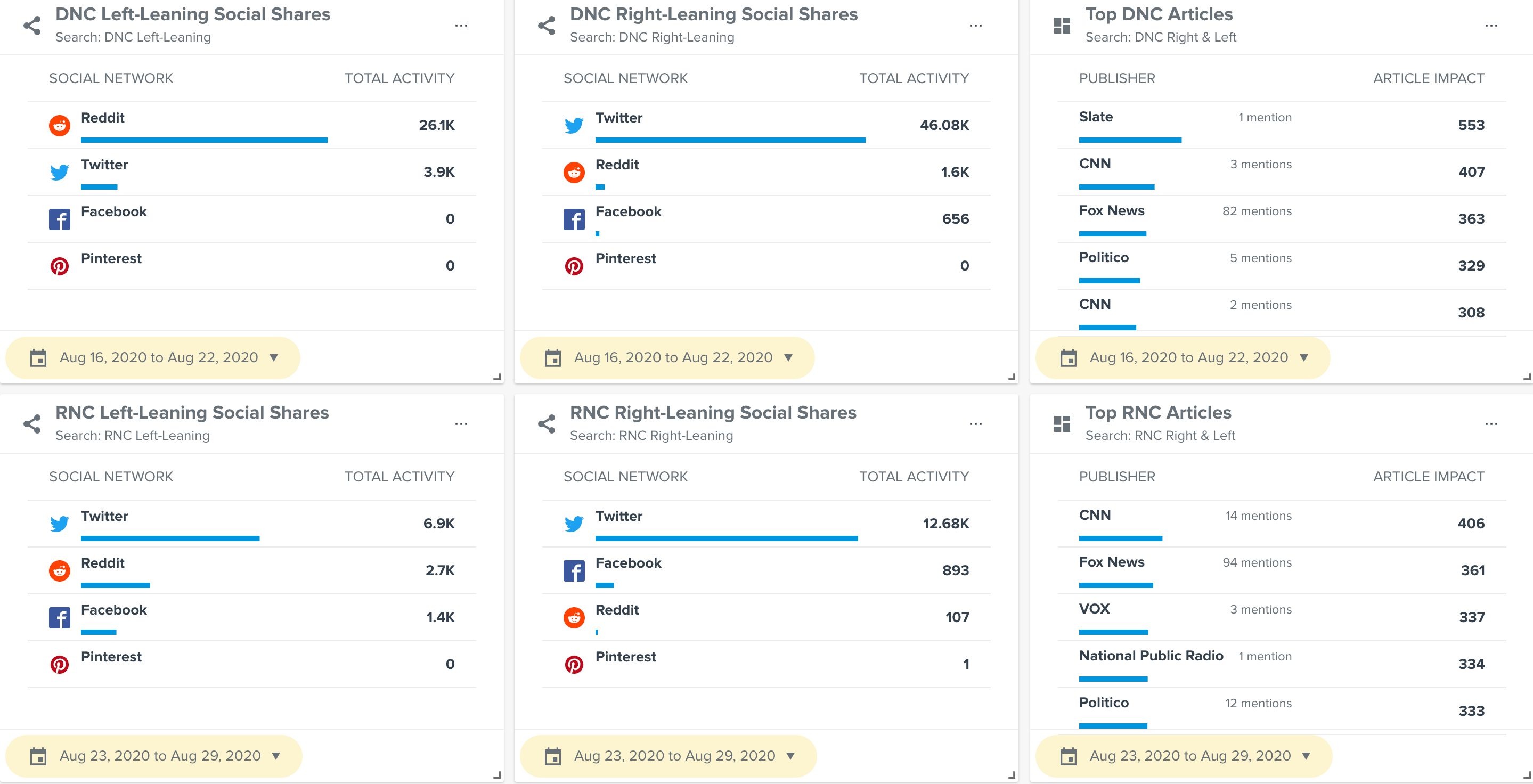 Does quantity equal quality?  Cision’s proprietary Article Impact score, which is a blended metric that balances the readership, social amplification, and sentiment of an article, paints a positive picture for the DNC. Despite having only 28% of the total share-of-voice, 80% of the top DNC and RNC related content was published by left-leaning publications.

The National Conventions set the foundations for both campaigns. In addition to looking at total mentions and social engagement, I wanted to dive into the key messages from those articles. The data shows a stark difference in what Biden and Trump perceive as important to American voters.

According to a recent Pew Research survey, the top five issues for voters in the 2020 election, ordered by importance, are:

Biden did a better job focusing on the top issues as identified by Pew Research. Biden hit on three of the five, while providing nearly equal attention to 50% of all issues. Trump only emphasized one of the five– violent crime. 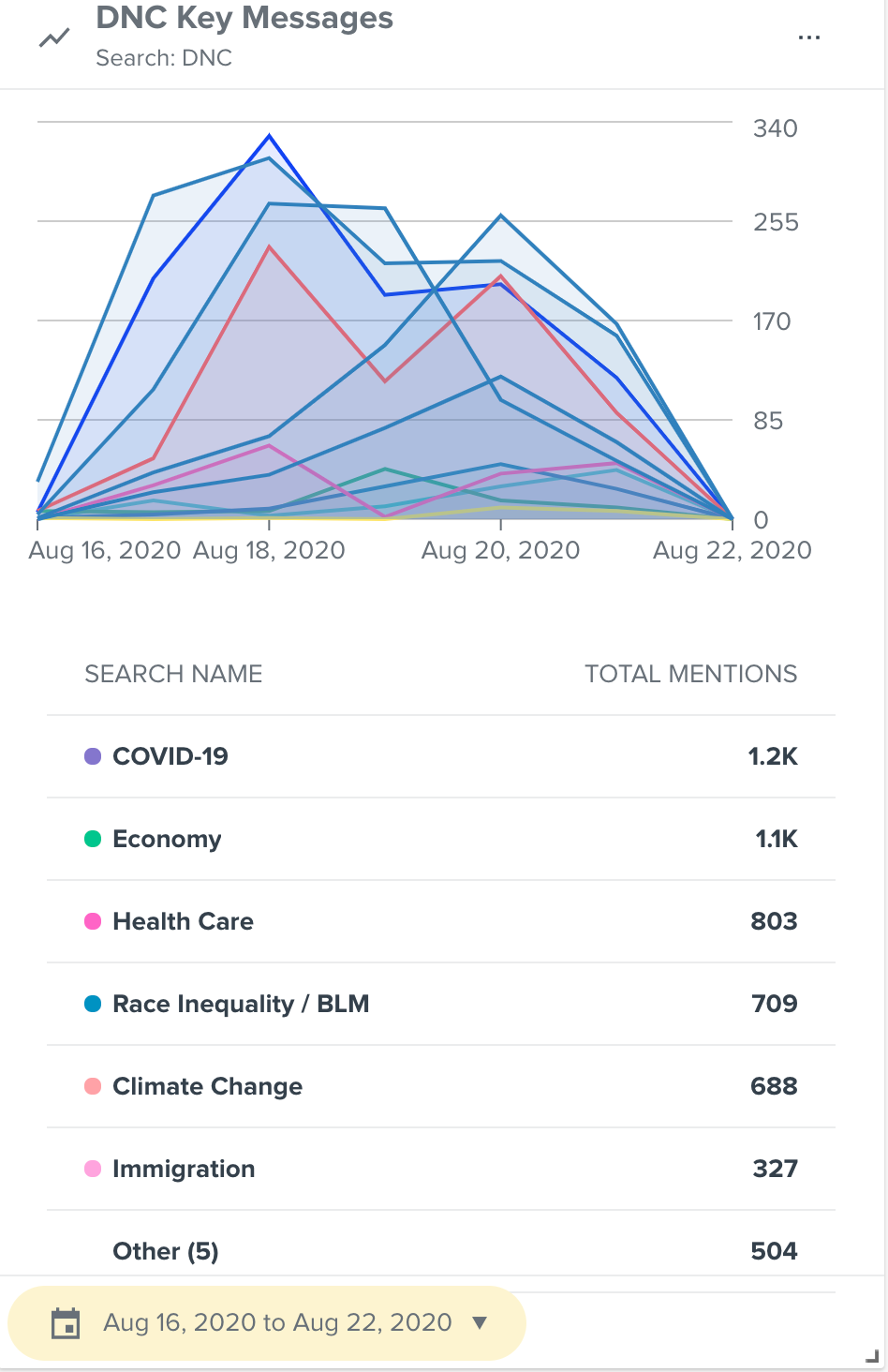 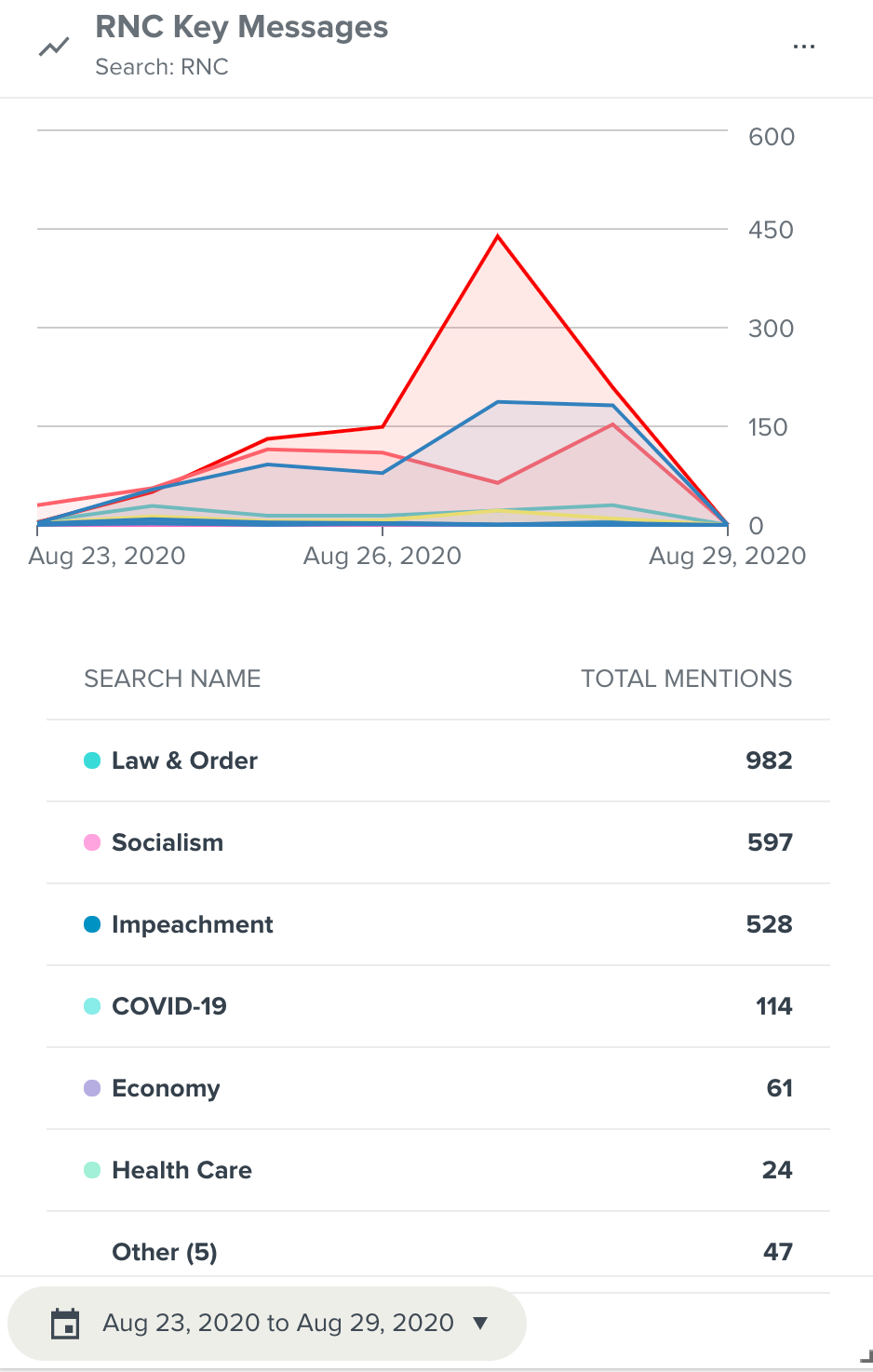 In addition to analyzing election coverage, we will highlight presidential election focused press releases distributed by Cision PR Newswire from the past week:

As DNC and RNC becomes old news, next week, we will provide a similar analysis focused on general coverage related to Trump and Biden, and we will introduce:

Want to follow your industry as carefully as we’re following this election?