When Queen Elizabeth II was laid to rest on September 19, 2022, the event brought together a global community of mourners and world leaders, in person and through the extensive media coverage. The pomp and circumstance surrounding her funeral at Westminster Abbey was the ultimate testament to her power and the respect she earned while leading the British monarchy.

From the moment she became sovereign in 1952, Queen Elizabeth established a distinctive communications style that she carried throughout her reign, and she showed great consistency in maintaining her voice and her personal brand. Though her time as Queen was not without controversy, the global response to her passing is testament to her status as an icon—and someone we can all learn from to be better leaders and communicators.

From the moment she became sovereign in 1952, Queen Elizabeth established a distinctive communications style that she carried throughout her reign, and she showed great consistency in maintaining her voice and her personal brand.

What follows are six crucial lessons in strategic brand communications as demonstrated by the Queen’s consummate handling of how her nation—and the world—responded to her and the British monarchy.

Consistency is crucial for branding when it comes to language and visual messaging, and how communications professionals convey this is critical.

From her early days, the Queen spoke slowly and clearly in her addresses, and her delivery didn’t change much over her 70 years on the throne. She was a calm and familiar presence through good times and bad times.

Her Highness also conveyed constancy through what she wore (see also #3 below), never deviating from bright skirts, dresses and coats (often accessorized by a brooch), matching hat and a handbag. In 2016, Vanity Fair created a “special citation” just for her on their International Best Dressed List, writing, “She has consistently represented who she is and what she stands for, without wavering from a standard she set long ago.”

Most importantly, the Queen stayed consistent in the pledge she made to her constituents on her 21st birthday, to “be devoted to your service” her whole life. Over the years, she has reiterated this message on many occasions.

For corporate communications and PR specialists, the lesson is a reminder to stay on brand and on message. This is true for startups, Fortune 500 companies and everything in between. You know your brand value and key messages; convey them through all of your channels consistently and be known for the attributes being projected.

Lesson 2: Know Your Audience and Be Prepared

When it came to addressing an audience, the Queen was rarely, if ever, unprepared. Over the course of her 70-year rule, she met 13 different U.S. Presidents and countless other heads of state. She did her homework—and her advisors made sure she had the information she needed to understand the matters that were top of mind for those she met with while conducting business.

She was “known as Reader No. 1,” according to the Globe and Mail, “because of the red leather boxes stuffed with official documents that she read on a daily basis for seven decades.”

She did her homework—and her advisors made sure she had the information she needed to understand the matters that were top of mind for those she met with while conducting business.

Knowing one’s audience is vital in communications. Professionals can use a variety of tools to be aware of conversations in social channels and earned media, brand sentiment and demographic and psychographic data about the various stakeholders they speak to. Meaningful relationships can be established, and greater influence can be gained by tailoring your messaging to the intended recipients.

For instance, in a meeting with Canadian Prime Minister Justin Trudeau in March 2022, not long after the Russian invasion of Ukraine, an arrangement of blue and yellow flowers, the national colors of Ukraine, featured prominently in the official photos and subtly indicated her support for the besieged nation.

Primary among her nonverbal tools was her wardrobe. “I think she always wanted to be two things: reassuring and recognizable,” Philip Mansel, a fellow at the Institute of Historical Research in London told The Washington Post. To that end, she wore bright, bold colors. “I can never wear beige because nobody will know who I am,” she once said.

“The Queen’s look was really a uniform,” Washington Post fashion critic Robin Ghivan told NBC News recently. “It was meant to convey her position…authority and a little bit of intimidation. It was meant to be seen.”

“The Queen’s look was really a uniform,” Washington Post fashion critic Robin Ghivan told NBC News recently. “It was meant to convey her position…authority and a little bit of intimidation. It was meant to be seen.”

Her fashion choices also frequently expressed solidarity with others. For instance, when she visited Dublin in 2011, the first British monarch to go there in 100 years, Elizabeth dressed head-to-toe in green. Her brooches, too, held meaning. “Her Majesty would often choose one with a connection to the person, country or organization she was visiting,” wrote Hello Magazine.

Even her handbag may have been used for communication. According to royal historian Hugo Vickers, she used it to “indicate her wishes when navigating official functions,” reported britishheritage.com. “If the Queen shifts her bag from one hand to the next, it signals that she is ready to end her current conversion.”

Broadcasting key information to partners in the media is essential to corporate and brand communications. Through a digital press center, the Queen was—and the royal family continues to be—able to speak directly to the global press corps. From speeches and articles to financial reports and press releases, Buckingham Palace is able to put clear, controlled messages out to the public to shape their agenda or respond to events.

The website is well-organized and includes photos, videos, and other media content the press can use for their reporting, and it allowed the Queen and other royals to keep a handle on the official messaging.

A digital press room on a website makes it easy for stakeholders to find and consume authoritative information, such as press releases, announcements, ESG and DEI policies, et al. It is another way that brands can own their stories.

People want to know where you stand; make it easy for them to find what they’re looking for.

Lesson 5: Be Flexible and Respond Quickly

Being able to respond in a timely way to crises or developing news can make or break a brand, a reality that the Queen knew well after weathering years of scandals, during which she showed a needed ability to turn on a dime and even break with the traditions she held dear.

Among the biggest challenges she faced involved trying to keep her family’s private affairs out of the media. The personal scandals seemed legion, from her husband Philip’s problematic comments, to Prince Charles and Diana’s divorce and the princess’ subsequent death in a car accident, to her son Prince Andrew being accused of sexual assault.

The Queen was known to act quickly to own the narrative. When Charles and Diana’s marriage became untenable, the Queen wrote to her son and, surprisingly, urged him to “agree to an early divorce,” the New York Times reported. And while it took the Queen five days to publicly respond to Diana’s death, which garnered criticism, she pivoted and then truly strayed from the expected: returning to Buckingham Palace from Balmoral, where she’d been with her grandsons, rather than driving straight through the gates, she got out of the car to walk by the mounds of flowers left by mourners. That evening she gave an unprecedented live TV address to say, “It is not easy to express a sense of loss, since the initial shock is often succeeded by a mixture of other feelings: disbelief, incomprehension, anger—and concern for those who remain.”

While it took the Queen five days to publicly respond to Diana’s death, which garnered criticism, she pivoted and then truly strayed from the expected: returning to Buckingham Palace from Balmoral, where she’d been with her grandsons, rather than driving straight through the gates, she got out of the car to walk by the mounds of flowers left by mourners.

More recently, the Queen wasted little time in removing her disgraced son Andrew from the public eye and stripping him of his royal titles when his scandal broke, so the royal brand could distance itself from him.

Communication professionals are encouraged to stay on top of the conversations in the media and public spheres, be aware of changes in brand sentiment and not shy away from speaking out, even when crises occur. Don’t let the media, pundits or others tell your story for you. Issue a press release, publish a statement from the leadership, acknowledge anything negative that arises and respond, when you can, with a level head, authentic voice, and be decisive.

Lesson 6: Be Empathetic and Connect with Your Audience

If there was one consistent criticism of the Queen, it was that she was too aloof. Still, she always showed kindness, respect, grace and dignity. She learned, particularly following Princess Diana’s death, to reveal a softer side of herself as well. In fact, regarding the Queen’s seeming non-response to her daughter-in-law’s passing, Tina Brown, author of The Diana Chronicles, said, “The Queen was adamant that her place was at Balmoral with her grieving grandsons.” And ultimately, when Diana’s funeral cortege passed by, Elizabeth bowed her head. “It was the bow that broke the fever of anger directed at the Queen and her family,” wrote The Washington Post, and it showed an empathy and acknowledgement of the pain her people were feeling over the family’s tragedy.

From that point on, there was a change in the monarchy. By 2012, she was even participating in pop culture, making an entrance at the Olympics next to Daniel Craig as James Bond, and insisting she should have a line to say in the skit: “Good evening, Mr. Bond.” The stunt won her raves. And she again showed she was up for some fun when she filmed a skit with Paddington Bear for her Platinum Jubilee weekend, which ended with her pulling a marmalade sandwich out of her handbag.

If you can connect on a human level, you have a much greater chance of getting your message across. Public relations is fundamentally about the relationships we make.

On a more serious note, in April 2020, not long after the world went into lockdown from the COVID-19 pandemic, she conveyed a message of hope and unity in a televised speech to assure her subjects, “We will be with our friends again, we will be with our families again, we will meet again.” Seen by more than 24 million people, the address proved another instance of the Queen’s clear messaging, consistency, comfort, and empathy for her people.

With all sincerity, please remember that whether you’re addressing investors at an earnings meeting, or journalists at trusted media outlets or consumers on Instagram, if you can connect on a human level, you have a much greater chance of getting your message across. Public relations is fundamentally about the relationships we make.

To learn more about how Cision is helping brands and brand professionals employ these lessons to refine their communications strategies, speak with one of our experts.

SPEAK WITH A CISION EXPERT 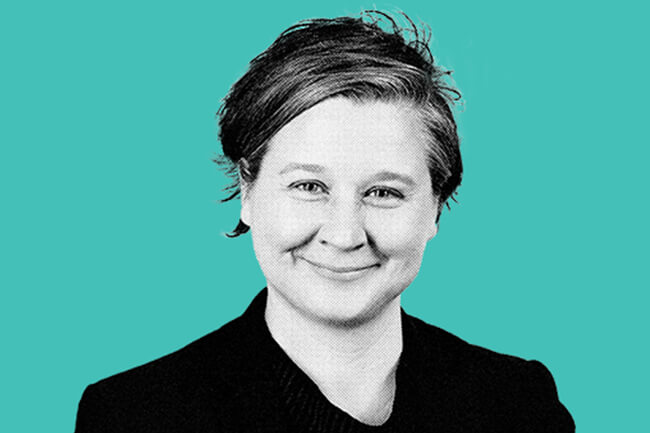 Nicole Guillot is Chief Operating Officer at Cision. Guillot was previously Cision’s President of EMEIA, Canada and LatAm, where she led the strategic direction, financial performance and operational activities across all the regions. Guillot’s career has taken a cross-functional journey across all areas of business, within the news and information industry. She has served as corporate director and primary representative in Canada since 2016. Previous to Cision’s acquisition of Canada Newswire (via PR Newswire), Guillot was President & CEO of Canada Newswire, a role she began in 2013, following two years as Senior Vice President, Global Products for PR Newswire.