How Did the Media Cover the Final 2020 Presidential Debate?

CHICAGO, Oct. 26, 2020 /PRNewswire/ -- Cision, an industry-leading earned media communications management and media advisory platform, published the latest data from its 2020 State of the Election blog series, a weekly nonpartisan media analysis of the U.S. presidential election. In week 7 of the series, Cision highlights how the presidential debate between President Donald Trump and former Vice President Joe Biden was covered by the media. 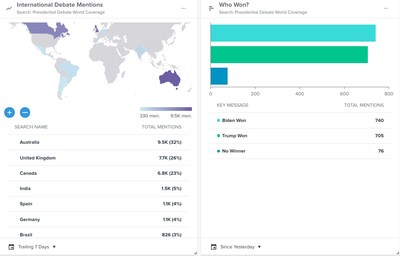 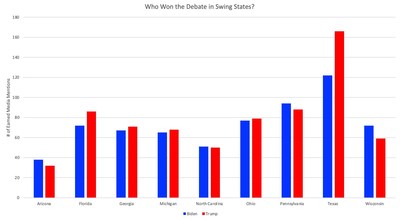 Within minutes of the debate ending, Google searches for "who won the debate" were at their peak. When looking at all U.S. media coverage, Cision found there are approximately 300 more mentions that claim "Trump won."

Cision also analyzed how local media in nine swing states judged the debate based on earned media mentions. Findings include:

Publications in swing states were nearly split – 52% to 48% in favor of Trump. Trump won big in Texas and Florida. Biden won respectably in Arizona, Pennsylvania, and Wisconsin. Meanwhile, there was a 10-point swing from the Vice-Presidential Debate where 62% of swing state publications said Pence was the winner.

"Cision's State of the Election series has continued to highlight the power of data, particularly the importance of analyzing information with a neutral point of view," said Lucie Vietti-Curtis, Director of Content & Comms at Cision. "As we inch closer to Election Day, we look forward to using our own earned media monitoring tools to reveal which voter issues get an increase in coverage and how publications communicate election results."

For more from Cision's State of the Election blog series, view the full media analysis here and subscribe to the series here.