Now that we know what vanity metrics are and we’ve peeked behind the curtain, how can PR & Comms act on this knowledge?

Let’s take advice from The Adventures of Sherlock Holmes circa 1892:

It is a capital mistake to theorize before one has data.
Insensibly one begins to twist facts to suit theories,
instead of theories to suit facts.

Naturally PR professionals are creative communicators and there’s serious power in storytelling. However, when allocating resources across an organization, who gets the most attention? The creative storyteller with no data, or the department (no matter the personality) with solid revenue numbers?

Now that we know what’s at stake, I’m here to give you hope. I believe Earned Media is more important than ever in a world of fake news and sponsored posts. Society also has effortless access to share every positive or negative brand experience no matter how miniscule. Your department should be growing, in fact. Capitalizing on positive Earned Media and acting upon negative Earned Media is how up-and-coming brands move through the ranks.

To get your seat at the table you’ll need to prove you deserve it, but vanity metrics won’t cut it. Let’s review the three steps to avoid this, beginning with the data and moving into theorization.

First, which data is needed?

In order to accurately depict the impact of PR, estimated reach is nowhere close to enough information. Peers in Paid and Owned Media provide metrics from the top of the funnel to the bottom— Earned Media should be no different.

My opinion on the ideal PR funnel is as follows. Note most of these metrics can be identified for either a press release, earned media, or (bonus!) for both: 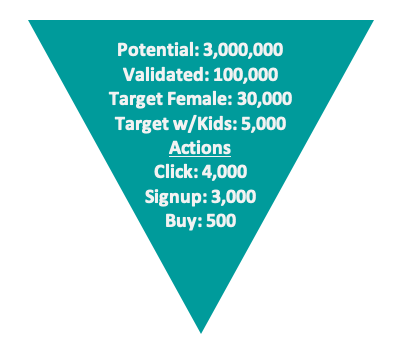 Second, what can we compare it to?

Having a full funnel is a productive start, but providing benchmarks is even more effective. Let’s take our previous funnel example and add a similar product campaign we promoted earlier in the year.

Not only do we have the full funnel of results, but now we know how A compares to B.

Finally, what results can we theorize based on this data?

With multiple data points throughout the funnel- plus comparisons from similar campaigns over time- we can now not only determine the effectiveness of A but also walk away with some actionable results and next steps. If all we had was “potential reach” of A versus B, we’d theorize based on the fact that Campaign A reached 3X the audience of Campaign B. Now you see how that’s a vanity metric!

This will differ for every organization (keep reading for more examples) but in this short scenario we can tell that we had better “click bait” with Campaign A – it reached way more individuals overall – but garnered fewer conversions in comparison. Let’s say we’re a pet store, and Campaign A is a clothing line for dogs. The press release got a ton of traffic, many journalists and even consumers posted cute pictures and earned media content, but few people spent $30 on a doggy T-shirt.

Campaign B for all-natural dog food made less of an initial bang, but it hit the target audience and a large percentage of them are now feeding their canines our food (which, btw, is a recurring versus a one-time cost).

Pro Tip: Your company wants to gain clients and grow revenue, guaranteed. Any metrics you show that align with this are sure to be a hit.

If you had been relying on vanity metrics and this article feels overwhelming, here’s the good news: most of PR has not caught on yet. Even the Barcelona Principles, the first real framework on measuring PR, were not established until 2010. There is still room for plenty of thought leaders in the space! My recommendation to you is as follows:

Hungry for more? Catch up on the first part in this series here, and look for part three on ways to measure the impact of Earned Media in the coming weeks!