Super Bowl XLIX: What People Really Thought of the Ads

Buzz about advertisements during Super Bowl XLIX was somewhat higher than during last year’s Seattle Seahawks v. Denver Broncos face off. Many brands this year took a more serious, emotional approach with their campaigns.

Although some viewers expressed a yearning for more light-hearted humor, others appreciated the new themes that tugged at the heartstrings, particularly the ads that promoted confidence in girls/children and showcased dads interacting with their kids. How do we know?

We used the Cision Visible Intelligence platform to create targeted searches to surface social discussion about Super Bowl advertising. Custom segmentations were created to overlay searches to surface deeper emerging themes. This data, in tandem with information from mainstream media outlets about the various commercials, enabled analysis of what people were saying about the various ads and brands showcased during the Super Bowl.

Advertisers relied heavily on themes and images that tugged at emotions. For some, this was a nice change from the old ‘babes and humor’ style of advertising, but others felt the scale had tipped too far in the other direction (#DownerBowl was trending).

The abundance of commercials that featured dads and their kids was a key topic of buzz in both social and traditional media.

McDonald’s “Pay with Lovin’” and the Budweiser “Lost Dog” commercials used emotion to promote their products, which generated a great deal of buzz for both brands.

Advertisers such as Dove and Coke were seen as using just enough emotional content without being heavy handed. Nissan began to push the envelope with the length of their “dad-vertising.”

Fiat and Doritos scored points in social media for use of humor in their spots.

Major media outlets embedded Tweets and videos in their stories that exemplified the serious, emotional theme of #SB49 ads.

There was a resounding thumbs down in social media buzz and traditional media coverage for Nationwide “Make Safe Happen” ad, which showcased a boy talking about all the things he would miss out on in life because he died in a childhood accident.

The “Invisible Mindy” Nationwide commercial starring Mindy Kaling and Matt Damon was seen as lighthearted and fun, but for many it provided another opportunity to criticize the brand’s earlier “depressing” ad. 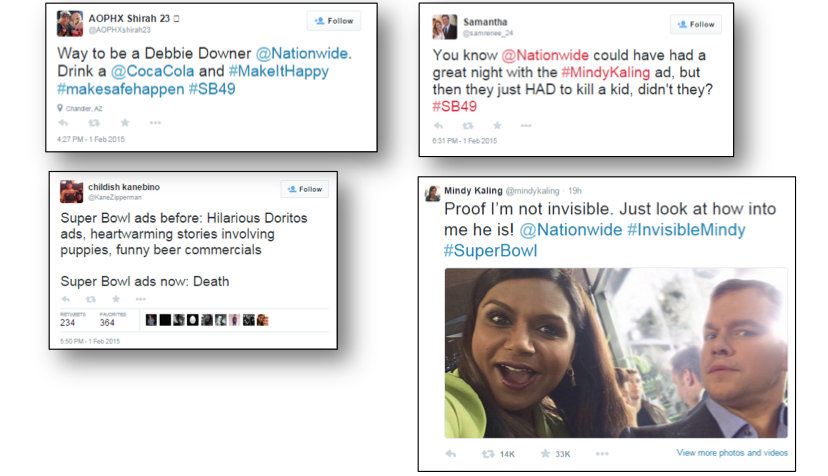 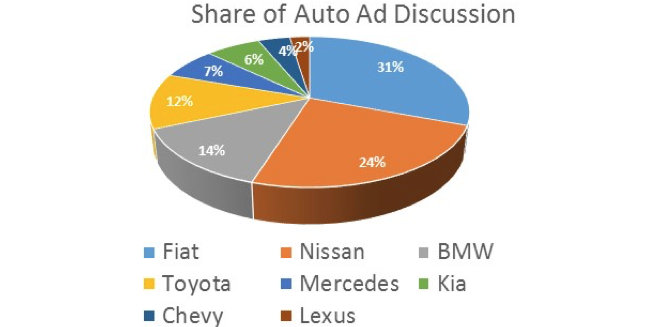 In line with previous Fiat commercials, the company used tongue-in- cheek sexual humor to convey their message about a “bulked up” new model coming in the spring. Many found this approach to be one of the funnier car commercials to air during the Super Bowl.

Chevy’s “blackout” commercial just prior to the start of the game was effective in generating buzz for the brand. One pundit on Twitter proclaimed, “Chevy just pulled an Oreo.”

Humor was on tap for the two major candy companies involved with Super Bowl advertising this year. Snicker’s new “You’re not you” commercial featuring Danny Trejo and Steve Buscemi garnered praise for its humor and retro-feel.

But due to Marshawn Lynch’s pregame snack, Skittles received a lot more buzz than Snickers. Fans of Lynch often remarked about his love of the candy and incorporated it into Tweets about the game and the advertisement.

Snickers and Skittles had numerous, amusing exchanges on Twitter during the game.

McDonald’s tweeted an offer to win a $1,000 wardrobe for following the airing of the “empowering” Weight Watchers ad. (This was an interesting response as the Weight Watchers ad showcased excessive consumption of food – including fast food).

Loctite used the Weight Watchers ad as a springboard for a humorous Tweet.

What did you think of The Big Game’s advertisements?

David Cullen also contributed to this post. He is a market research analyst with more than 15 years of experience helping clients transform consumer data into actionable insights. Prior to working in social media, David worked in traditional market research helping clients in the CPG, retail and technology sectors through both qualitative and quantitative methodologies.

Marsha has more than 15 years’ experience helping clients leverage the power of media research to help achieve business results. She has worked with many top global brands in industries that span consumer electronics, CPG, technology, pharmaceutical/healthcare, financial services and more.