Why Established Social Networks Are (Probably) the Best for PR

Facebook is concerned that you’re not sharing enough personal information on its network. They call it “context collapse” and while it may be real, it is a problem that any other social network would be happy to have. Don’t take my word for it, check this out: 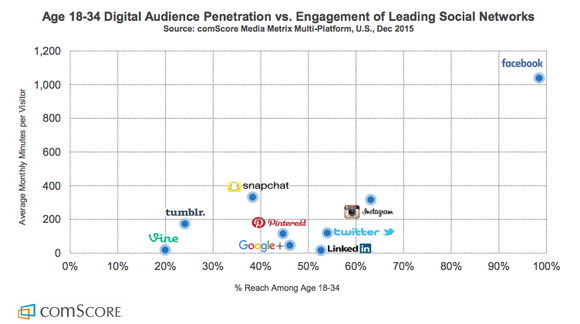 While Facebook was concerning itself with the minutia of your life that you are forgetting to document on its platform, Pheed shut down. You could be forgiven if you don’t know what Pheed is, although three years ago Mashable dubbed it the “next social craze for teens.” The next social craze for teens offered a way for people to monetize a microblog – one of thousands of upstart social networks with an idea needing an audience.

As much flak as Facebook (which has been “dying” for years), Twitter (which hasn’t grown commensurate with investor expectations) and email (high tech for grandparents) get – they are some of the most reliable platforms that we have to communicate at scale with a target audience.

The Numbers Are Pretty Compelling

These numbers from Pew are a couple of years old, but they exemplify the saturation that established social networks enjoy:

If this information were updated today, I suspect you would see Snapchat included in these numbers and see additional growth for Instagram. But what does this mean in relation to other social networks?

It depends on the audience and the size, but I can share anecdotally that I’ve occasionally added social sharing buttons of upstart social platforms to my website and found that they were rarely used.

But what about Facebook zero (near zero organic reach for Page posts) and Twitter’s stagnant audience? A couple of things: first, all social networks are pay-to-play at a certain scale.

Facebook is an extreme example of this because it is the largest social network by many measures, and you pay to reach all of your fans and to target non-fans by extraordinarily precise criteria. Outreach is not free, but posting to the abyss on a newer social network more or less accomplishes the same thing as posting for free on Facebook (nothing).

As for Twitter, reaching 23 percent of all online adults isn’t insignificant. But there is another reason for optimism about Twitter outreach: Twitter just reached an agreement to live stream 10 NFL games next season.

If just a portion of NFL viewers sign up for Twitter to view the games, it is going to result in a huge number of new users for Twitter with very paltry (albeit filtered) streams. It’s a shrewd partnership and it will be interesting to see how healthy Twitter becomes once games start streaming.

When you consider email, the numbers are even more compelling: email may be more effective than social by a factor of six measured by open-rate and click-through. Email may be from the dark ages, but it remains a highly-effective tool for communicators. In fact, one survey found that businesses spend nearly as much on email as on social media.

Social care is the last free(-ish) thing that you can do on the major social platforms; when a customer reaches out to you, you can respond in kind. And where do they prefer to do this? Overwhelmingly on Facebook and on Twitter.

That customers want to reach out to you on these platforms isn’t especially surprising; it probably has something to do with which platforms people are most familiar with and the platforms that people expect you to respond to. Even the most enthusiastic early adopter probably wouldn’t expect resolution if they complained on Ello.

Life is complicated and oftentimes we default to the easiest option. As much as we’d like to think that (your social network here) is the greatest thing since MySpace, for most people the utility of Facebook, Twitter, LinkedIn, Pinterest, Instagram and Snapchat do the trick. And there are people they know there, which is a bonus (I started trying to use Snapchat before anyone I know adopted it – it was a futile effort).

Especially when it comes to social media usage and email campaigns, it’s important to take your personal opinions and feelings out of the equation. As a communication professional or marketer, odds are that you have an early-adopter mindset. Everyone else does not. Tell me a million ways that Google Plus is better and I’m going to keep stalking my exes on Facebook.

The iPhone 6S runs a cool $649 new. Pretty pricey, right? In 1983, the DynaTAC 8000X cell phone cost a little shy of $10K (in 2016 dollars). Even though $650 is a hefty chunk of change, the value that you get for your personal cell phone is exponentially greater than users of the DynaTAC phone.

The cost of early adoption of a cell phone is felt both in resource allocation and in relative function, and this is analogous to early adopters for marketing and PR. When you’re working within a budget, it may be tempting to chase “free” at the expense of “known.” But what does that really cost?

In his book “Originals: How Non-Conformists Move the World,” Adam Grant discusses the opposite of the Blue Ocean phenomenon by identifying the costs to maintain and adapt a unique product to a market. First to market products often fail because they don’t have the resources to create a market need and to adapt.

The relevance of this insight is two-fold for businesses looking to be early adopters – social network utility morphs over time AND as utility is established and benchmarked, it becomes clear(er) where you can allocate resources for the best return. Will the utility of this new platform be the same as it was last week (talking to you Meerkat), and do I know what I’m getting by participating on this platform?

This is why it costs money to distribute content on Facebook – you know what options are available and how effective it has been in the past. Conversely with Periscope, you could put a lot of resources into live video and have a difficult time quantifying the impact of the content. Which is not to say that you can’t bet against the house and win, but to understand the odds try Googling “Facebook alternatives” and see the graveyard of social networks that have come and gone purporting to be the “new Facebook.”

I love being an early adopter. I could mention all of the apps that I have loved throughout the years that nobody used, some that I passionately wrote and advocated for (I think at one point I wanted to marry Highlight).

Point being, I clearly am not a good judge of what everyone will like and use. Odds are that you aren’t either.

Communication professionals and marketers tend to want to be at the cutting edge of technologies and applications – this is fine. But when we project those early-adopter preferences into our budgets and outreach plans, we risk losing touch with the people we want to communicate and interact with.

Facebook is good enough for most people. Most people will read email in between doing something more exciting. Most people default to these bigger networks because scale offers them a utility that they cannot get from a niche platform. For marketers and communication professionals, this is good because we can meet customers where they are instead of where we hope that they’ll go.