Pharma falls into that unenviable category of, ‘we love to hate them.’ These are companies making life saving and pain relieving drugs that cost millions to research and require years of willpower to navigate process and safety requirements to get drugs on the market.

Yet, when an article like The Wall Street Journal’s “Pharmaceutical Companies Buy Rivals’ Drugs, Then Jack Up the Prices” by Jonathan D. Rockoff and Ed Silverman appears, my curiosity piques and I wonder what impact it will have on the pharma brands referenced. Will the references to a company like Valeant Pharmaceuticals International Inc. leave me with a favorable or unfavorable impression of the brand?

In the article mentioned above, the headline certainly points towards the unfavorable.

An analysis of the article revealed the following: 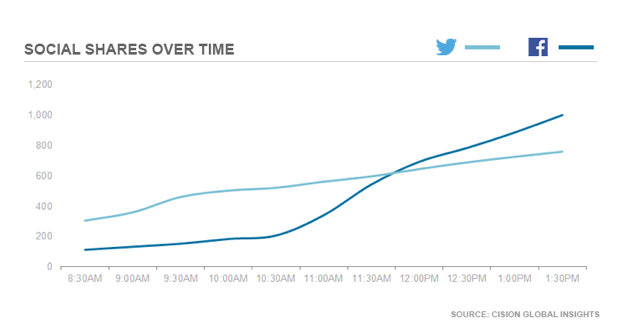 Depending on where you are on the spectrum as a reader—whether you align closer with the shareholders and therefore think that Valeant has capitalized on an opportunity by value pricing the two drugs for maximum profit, closer with healthcare professionals frustrated by the increase in costs, or closer to the consumer who struggles with the lack of regulation on drug pricing and impact on the cost of care—this article neatly represents various angles to ponder.

It’s always good to have context to understand the significance of a story. Facebook sharing started picking up around lunchtime and increased steadily throughout the afternoon on April 27.

For comparison’s sake, two other health articles from The Wall Street Journal are included along with their Facebook and Twitter sharing to illustrate the interest on this topic compared to the other two articles:

Want to win some good coverage? Follow these 10 do’s and don’ts of media pitching in our free tip sheet!

Mathida Joubert is a Vice President in the Global Insights group at Cision. An analyst at heart, she loves following data bread crumbs to ultimately tell stories. She has consulted numerous automobile manufacturers, biotech and pharma companies, major foundations and other not-for-profit organizations to help them measure the success of their communication activities. Always planning the next place to visit, she’s visited over 30 States in the U.S. and extensively abroad, but her favorite remains her native country, South Africa.