Behind the Blog | John ‘Spartan’ Nguyen, Editor-in-Chief of Nerd Reactor

Welcome to Cision Blog’s newest content series, Behind the Blog, where we chat with a notable influencer in a particular digital space, such as food, fashion, or finance.

Nerd fare has become big business. Whether it’s comic books, video games, science fiction or fantasy, what was once the province of just a bespectacled few is now accessible to the masses; three of the top ten highest grossing films of all time are based on classic comic book properties. All of the major networks have featured comic book-based shows, mostly to stellar ratings and far-reaching popularity, while comic book and graphic novel sales have reached heights not seen since the industry’s 90s heyday. HBO’s fantasy epic “Game of Thrones” is poised to be an Emmy darling, and MTV will debut its own fantasy series this fall. Even “The View” is breaking comic book industry news.

“Even the jocks I knew in high school are coming out of the nerd closet,” said John ‘Spartan’ Nguyen, editor in chief of Nerd Reactor. “People in general are becoming nerdy. They are getting the latest phones, using the latest apps, and getting addicted to mobile games. The big films these days are geeky films like ‘Jurassic World,’ ‘Star Wars,’ Marvel and DC films. Now the nerds are taking over.” 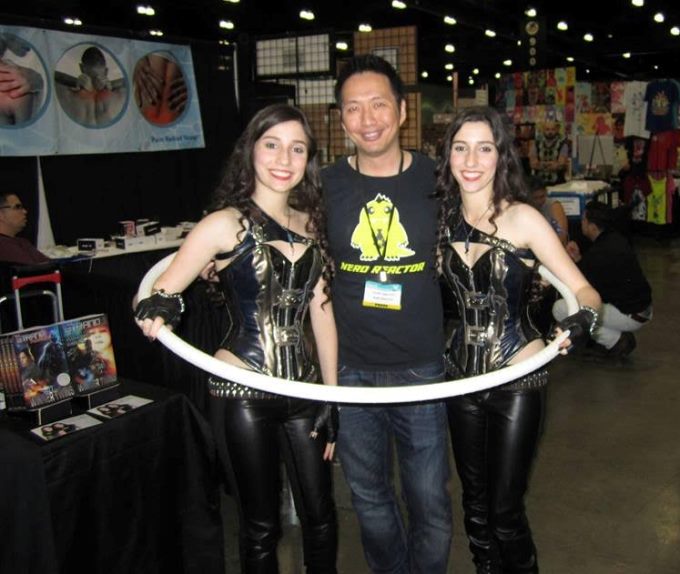 John Nguyen with The Winner Twins

Nerd Reactor was founded in June 2010 simply by “a bunch of guys and gals wanting a place to share their love of movies, video games, comic books, and more,” Nguyen explained. Though he never expected digital media to become a career, he’s thankful to be able to do what he loves. “I get to play video games, watch movies and TV shows, interview people in the movie, comic book and video game industries and produce fun videos. It’s like one big playground.”

A staple of Nerd Reactor’s content is its podcasts. Boasting one of the “top nerd podcast networks on the web,” shows include “Nerds of the Round Table,” “Nerd Wars,” “Awkward Conversations” and “VideoGame BANG!” Features run the gamut as well, covering everything from cosplay to the ten lamest comic book superheroes. In the future, Nguyen plans to expand graphically. “We’re going to be working on producing more video content. More music parodies and social experiments. Think of the nerd life and mainstream clashing. I’m hoping people will get a kick out of those,” he teased.

With the absence of such classic nerdy publications as Wizard Magazine, EGM (Electronic Gaming Monthly), and GamePro, modern fans turn to the web for the latest in nerd news. Key to Nerd Reactor’s strategy is social media, with a Twitter following nearing 50K. Fortunately for Nguyen, getting nerds to discuss the merits of Marvel Comics versus DC, for example, is not the hardest thing to do. By introducing key topics for debate, engagement amongst ‘fanboys’ and ‘fangirls’ comes naturally. And Nguyen knows that Nerd Reactor, like the industries it covers, would be nowhere without its fans.

Nerd Reactor also welcomes a relationship with the PR world. “The relationship between PR and bloggers has been great,” Nguyen said. “The PR companies know of the importance of blogs and social media, and they are tapping into that. It’s only going to improve in the future.” Nguyen noted that this relationship works best when influencers are simply treated like people. “I’ve been in contact with a lot of PR teams out there,” he said. “The ones that I gravitate toward are the ones who actually invite me out to meet them. They get excited about teaming up, and that excitement spreads like wildfire.”

Speaking of wildfire, one certainty for media influencers is that their inboxes can be sieged to supervillain-like proportions, so getting an influencer’s attention is key, but not always easy to accomplish. “What usually catches my attention is the nerdy and trendy,” Nguyen explained. “Social media also helps with that. One example I can think of is when I saw a parody video called ‘Straight Outta Gotham’ being shared. With ‘Straight Outta Compton’ recently released in theaters, I got to find out how gangsta rap and DC Comics characters can flow together.”

When questioned about the recipe for Nerd Reactor’s success, Nguyen doesn’t require a utility belt of Batman-level gadgets and tech, and said he is simply “determined to deliver great content.” To anyone seeking to enter the digital dimension, he recommended that “You must also learn how to market yourself; start shouting to the world that you have something to offer, but don’t be annoying. Actually, others in my field have been annoying about it and it worked for them, so to each their own.”

Nerd fare, while once perhaps cause for bullying or grist for the teasing mill, has most certainly become part of the mainstream conversation, perhaps most bewildering to its most dedicated fans, who never could have expected Captain America or Iron Man to grace the silver screen, or conceived of The Flash or Green Arrow as primetime pals. The medium itself continues to be one that’s more than kid stuff, with comic books now espousing the virtues of diversity, smashing stereotypes and even doing their part to further gay marriage.

Just this week, Wonder Woman fabulously officiated a gay wedding, saying “To us, it’s not ‘gay’ marriage. It’s just marriage.” While perhaps once dismissed as a distraction, hobby or even kids’ stuff, blogs like Nerd Reactor show that this wonderful world of imagination is one that demands attention, and is a medium that actually has something powerful to say about the world it reflects.