Public relations and data analytics used to be worlds apart. In the old days, most PR measurement consisted of soliciting opinions directly through surveys and indirectly by measuring behaviors based on opinions, like buying or voting. Still, for most variables, data was expensive, limited, lagging or all three.

As a result, measuring the impact of public relations or media campaigns relied heavily on leaps of faith. Measurement focused on outputs instead of outcomes, or efforts simply went unmeasured.

Now, text analytics, widely available demographic data and the ability to harvest media in near real time can provide more detailed insights faster than ever before. Big data processing tools, theoretical and technical advances in text analytics, and better image processing tools are rapidly driving change in PR data analysis and how we measure content.

So what are four of the biggest PR measurement trends?

In media analysis, we can measure the world as it is in yes/no, positive/neutral/negative sentiments. An audience will support or not support a particular policy, buy or not buy a particular product or stock, and vote or not vote for a particular candidate. But to influence, we need to understand the deeper factors.

There are some counter-intuitive findings, as well as some predictable ones, such as “bad” and “fake” in the positive comments and “closing” and “appraisal” in the negative comments. A closer examination of the articles shows that realtors helped clients avoid some “bad” mistakes and that good “fake” flowers helped in stagings. We also find that first-time buyers wanted more help from their realtors in understanding the appraisal and closing processes.

Still relying on ad value equivalency? Click here for tips for modernizing your PR with our free tip sheet!

IBM’s Watson project, as well as Google’s Knowledge Graph, are doing something that sounds simple but has remarkable results. They’re creating databases of facts and developing programs that use these facts to analyze texts.

Right now, they’re using these databases to answer questions (which is how Google immediately produces the answers to many kinds of queries or how Watson regularly beats humans in trivia contests like Jeopardy).

In the text analytics world, there are tools that can recognize entities and apply related information. For example, a system might “know” that Steve Jobs was CEO of Apple and Tim Cook is currently the CEO. It also recognizes the relationship “predecessor.” So in this way, the system would apply that knowledge to an article that identifies “Tim Cook’s predecessor” and tag the article as referencing Jobs, even though the article never explicitly mentions jobs.

However, we’re still quite far from this goal. For example, a human can very rapidly tell the difference between ambiguous meanings, based on fairly subtle clues in the context. For example, if I mention a taste for spicy food at the beginning of a review, and later mention that the restaurant’s Danger Zone Pizza wasn’t hot enough, most humans would understand that I meant “spicy.”

If I said that the pizza came right out of the oven “too hot to eat,” readers understand that “hot” refers to temperature and it’s not necessarily a complaint, since the pizza could cool down. Or similarly, if a human reads “a lot of Hawai’ians like spam,” they will use their existing knowledge of the world, which contains facts like “nobody likes unsolicited junk email” and possibly “Hawai’ians have a high per capita consumption of SPAM®” to understand that the sentence refers to the food rather than to junk email.

When we ran that same sentence against several semantic tools that include entity recognition, most of them identified “spam” as meaning unsolicited email.

While it seems very likely that we’ll reach near-human computer capacity to analyze text, between now and then, we still need humans.

One of the most famous cartoons about the Internet, published in 1993, says, “On the Internet, nobody knows you’re a dog.” Twenty-plus years later, the Internet has the data to tell, with more and more accuracy, not only whether a user is a dog, but the dog’s breed, age and favorite chew toys.

This gives invaluable data to PR professionals, since they can target communication by demographics, attitudes and interests, and also analyze message impact by audience.

Anthropologists more or less agree that writing originated through pictures. Looking at how much we communicate online via photos, visual memes and emoji, we just might be coming full circle.

Whoever first said a picture is worth a thousand words probably wasn’t thinking about metadata, but the information in even a fairly simple image could well take a thousand words or more of metadata.

Social media based on images and video is booming and in some cases, are active and capable of shaping opinions long after the time they were posted. According to a 2014 study by Wisemetrics, tweets have a half-life of 24 minutes and Facebook posts have 90 minutes. In other words, after 24 minutes, half of the people who are going to see a tweet, which are still largely text-based, have already seen it. After three hours, a tweet has reached three-quarters of all the viewers who will see it, and a Facebook post takes five hours. A 2013 Piqora study found that pins have a half life of 3.5 months.

The quantification of media relations and public relations.

Public and media relations used to be almost entirely based on “soft skills.” Clear and persuasive writing and speaking, professional relationship development, understanding the media landscape, all of these are still necessary. But more than ever, these fields also require strong quantitative and analytics skills. 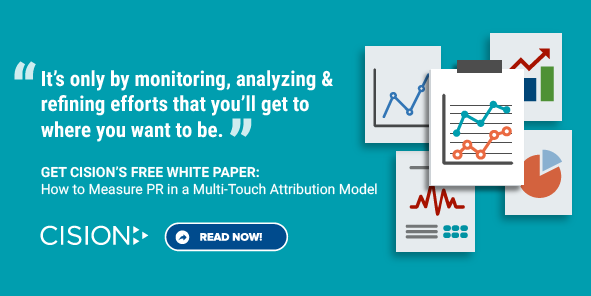 Ann Feeney is the Information Science Specialist at Cision. When she's not information scienceing, she's planning travel, practicing photography, or inventing titles for her unauthorized autobiography.