Here’s a round-up of this week's PR news, including Cision's latest webinar, it's press release analyser and wins for Ready10, Centropy PR and Aisle 8.

Having a simple message which you can explain in one line is the key to creating a great PR stunt, Tin Man founder and CEO Mandy Sharp and Radioactive PR founder Rich Leigh revealed in Cision’s latest webinar. You can read the full write-up here and watch the video below. 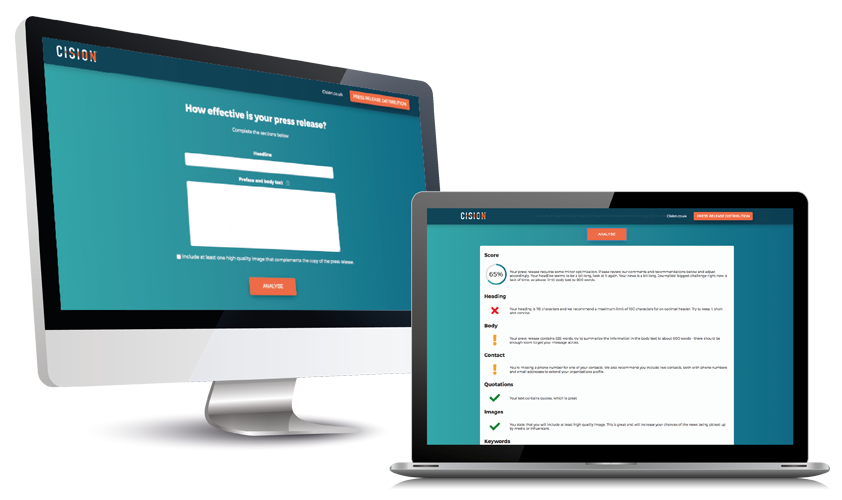 The media landscape may have changed dramatically in recent years. But the fundamentals of media relations remain the same. And, while it may be evolving, the press release remains a communications staple.

To make sure you’re producing the best press releases possible, we’ve created a free tool to analyse your draft press releases and suggest ways you can optimise your release to maximise coverage.

The Cision press release checker tracks aspects which determine whether your release will engage journalists, such as the length of the heading, quality of the copy, use of quotes and whether you have included images.

Try the tool now to see how well your latest release ranks.

How to write a press release in four easy steps

Cision’s 2019 State of the Media Report found that 73% of those journalists surveyed wanted to receive press releases from brands and comms professionals, ranking well ahead of other content types.

Tanya Layzell-Payne, founder of hospitality specialist Gerber Communications, details why PR is essential to supporting restaurant growth and isn't just "nice to have".

Lansons has appointed James Dowling as a board director. Dowling will head up the consultancy's public affairs and public policy offering.

Prosek Partners has hired Fiona Laffan as managing director of its London office.

The Southampton International Boat Show has appointed Ready10 to run the PR and comms programme for its 2019 show, which begins this week. The agency will support the 10-day event via a creative comms strategy management, management of the show’s celebrity ambassadors and influencers plus an on-site media team for the show’s duration.

Escorted and independent rail holiday provider Great Rail Journeys has selected The Lucre Group to be its UK PR agency.

Toy retailer The Entertainer has appointed Carousel PR to manage both its consumer and corporate PR.

Aisle 8 has announced two new wins. Plant-based skincare brand Elemental Herbology has appointed the agency to manage all brand, product and editorial requests, while After Beauty has selected the agency to look after its UK comms and events.

Camron PR will handle PR for both Artemide and Danese.

The Oska Bright Film Festival, an event for films made by or featuring people with learning disabilities, autism or Asperger's, has appointed Stand Agency to raise awareness of the festival.

The Indie Beauty Media Group has appointed Kilpatrick to handle its UK PR. The agency's focus will be on promoting the second London Indie Beauty Expo and the Innovation Showcase.

Another Word Communications has launched a daily WhatsApp broadcast of brand purpose news and campaigns. The move comes following research which revealed that consumers would welcome brands using their position to influencer government and policy.

Jargon PR has been invited to become a member of the Forbes Agency Council, a community for PR, media strategy, creative and advertising agencies.