Behind the Headlines With Daniel Sieger

If your story isn’t clear and simple, your audience won’t pay attention. So how can you ensure you make an impact? 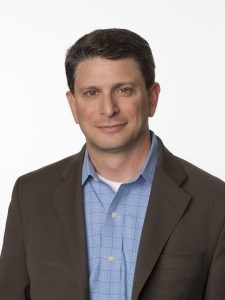 Daniel Sieger, senior vice president of brand strategy at Cengage, says instead of explaining all the details, give your audience an idea of what you stand for. They’ll seek out the rest if they’re interested.

In this interview, Daniel discusses the process of building your brand, why it’s important to continue asking questions and how PR skills translate to other areas of communication.

What drew you to the field of PR?

In college, I fell in love with the persuasive power of words. After several years as a terrible economics major, I became a pretty good English major and realized I had a talent for writing. I clearly remember asking someone: “can you make a career out of this?”

I did a few internships in Boston – both in journalism and in PR – and was much more strongly drawn to the business-focused side of public relations, especially the different styles of writing and working with journalists on behalf of clients.

Twenty-five years later, I still get a rush when a story I’ve worked on appears. If you ever lose that, it’s time for a new career!

What are you most excited for in your new role as senior vice president of brand strategy at Cengage?

The potential for what we can do. I’ve now been in the education side of PR for a little over four years, and the mission of this company is so powerful. I love working with our passionate team who know that education is the key to giving people what they want – opportunities.

Cengage is a brand with little recognition outside of the education field and has gone through some challenging times – most notably a bankruptcy. That said, things are really coming together for the company, and our student-focused drive will give us a chance to tell our story in a truly differentiated way.

What are some of the biggest PR mistakes brands make?

Not following through on their brand promise. If a company tries to invent its brand from the outside in, it’s never going to work. The creation and refinement of a brand needs to be a deliberate, organic process that significantly incorporates the ideas of employees and evolves naturally.

Another mistake? Brands that think they’re something they’re not. You see this often manifest itself in social media. Some brands really think they’re cool and try to talk to customers in a voice that’s really inauthentic. People see through it immediately.

With so much content saturating the marketplace, how can brands stand out?

Simplify, simplify, simplify. People want to know what your brand stands for, but the vast majority of them don’t want details on everything you do (and if they do, they’ll find it!).

Come out with a simple, clean story – and tell it over and over again. As someone once said: “The phrase ‘I got it all in there’ should be said with a great sense of shame.”

What do you think are the most important skills a communication professional should have?

The courage to ask questions again and again until you get the answer that makes sense. Many of our marketing and sales colleagues love speaking in jargon, and they think everybody else does too. Too often a communication professional is afraid of seeming dumb and they don’t push to get something in normal English. I’ve never minded sounding dumb – sometimes it’s the only way to get answers!

You also need to have the confidence to throw out new ideas on a regular basis. Sure, a lot of them won’t go anywhere, but the ones that do will give you an immense feeling of satisfaction.

How have your PR skills helped you in other roles?

PR skills are an amazing springboard to doing so many other things in a company. I’ve been very fortunate in my career to have been offered the opportunity to broaden my communication skills to other areas, such as speech writing and internal communications.

But getting involved in brand strategy for the past few years has been so exciting. It’s really all about storytelling, which we communication professionals do every day. You just get to do it in a broader way. And while I’m not a graphic designer at all, I know what’s impactful – and I’ve enjoyed learning the vocabulary of visual mediums.

What advice do you have for those looking to begin a career in PR?

First, write as much as you can! There are so many opportunities to write now, whether it’s for your own blog or for the many smaller news outlets that need content. When I’m hiring someone, I immediately want to know if they can write in a clean, concise style.

Second, don’t major in PR. Don’t get me wrong – I love this field, but I can teach you how to write a press release in a few weeks. Spend your tuition money learning something which sparks your curiosity and creativity. Learn about meditation. Seriously, there’s things I remember from a meditation class I took senior year of college while so much of my other classroom learning has gone by the wayside.

Third, find a job where you can get your hands dirty. I’m a big fan of starting out at a small PR firm. When I joined the Bruce Cohen Group in 1993, there were two of us (which I suppose technically qualifies as a “group”). But within a week or two, I was pitching The New York Times. And because we worked in an open space, Bruce would listen to my pitches and offer suggestions on how to make them better.

If I had started at a large firm, I would have been building media lists and faxing (!) for the first several months. When I did move to one of the world’s biggest PR firms, I was ready to make an impact there.

1. I always thought I’d be…having fun in whatever I did.

2. My hobbies outside of work include…running, live music and craft beer.

3. The thing that gets me up in the morning is…it’s a fresh slate.

4. If I won the lottery, I’d…follow Bruce Springsteen around for a few years.

5. My hidden talent is…recognizing a song within the first few notes.